Share All sharing options for: Michael Phelps the author 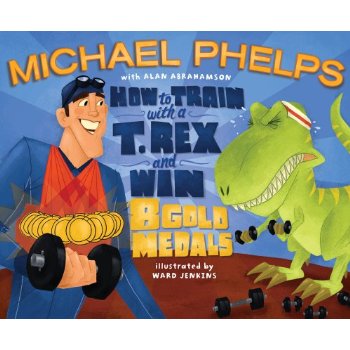 Michael Phelps has a new book out: How To Train with a T-Rex and Win 8 Gold Medals. It took me awhile, but I got through it. I must say, he spends quite a bit of time throwing dinosaurs under the bus. I knew it was going to be unkind by the cover art. Look at that T-Rex struggling with those small weights. Plus, everyone knows the T-Rex has a big head and tiny arms.

He writes he "got so strong from training that my legs could press 300 pounds 60 times. That’s 10,000 pounds total, or 9 tons. I could leg press a Tyrannosaurus Rex and 10 Velociraptors." via universalsports

What did ten Velociraptors ever do to Michael Phelps? Did they ask for him to dig them out of the ground, extract them from a mosquito's ass, reconstitute their DNA using that of a frog's, and then heave them around like sacks of sugar? Of course not. Also, how badass is that? Michael Phelps heaving Velociraptors. Jurassic Olympics; where are we at on this?

Children, for your health and safety, aww hell, for your health and safety get off the Internet. Tell your mother you clicked the wrong thing and go to the library. But if you do go on reading, and you're interested in this book, I cannot advise any of you to take 3 hour naps and eat 10,000 calories a day like Michael Phelps did. It's wrong, kids, it's all wrong. Only when you swim two trips to the North Pole and back from Baltimore, or three times the length of the Great Wall of China, or even 19 Washington Monuments or 11 Eiffel Towers in distance can you do that. I don't want to see a bunch of you laying around weighing thousands of pounds, taking three hour naps, and measuring things using units to which nobody has any reference. Not out of concern for your safety, mind you, I'm just certain that your hulking masses will obstruct my path to goods and services, and you won't be able to do work anywhere because you measure things in monuments, towers, or Great Walls, hindering my ability to obtain said goods and/or services.