Previously on UNCOMMON SURVIVOR! Just kidding, this is the first episode of the nineteenth season of Survivor! Nineteen seasons, nearly a decade, not one murder. And since this is the first episode, that means one thing: profiling! We open with some helicopter shots and Jeff standing on some rocks with some huge waves crashing near him. And I mean near him. I can't help but wonder how many times he was hit by a wave and had to change wardrobe. He mentions first impressions, and that means good old fashioned USDA Organic nuanced racism and sexism!

The Survivors are shown paddling ashore in canoes and right away I've spotted a black dude in a gray sweater vest. I love this show. Off the top of my head, I can't think that I've ever seen something as out of place as that.The first person they show is a butch chick who thinks she rocks. Congrats, I already hate you. Brunette with flower in hair calls the stocky dude a pit bull and I agree. He announces that he's here to ruin everyone's day. The last lady is a cop and hates the world. Jeff explains the game and we are under way!

As always, the jump is your spoiler warning. Hit it to proceed.

At first I was disappointed that the teams were already divided. The schoolyard situations always leave someone with hurt feelings. Right off the bat, everyone elects leaders for their respective tribes, Galu (purple) and Foa Foa (yellow) , and without names, you are given a raw sample of the contestants' ability to assess their peers and communicate what they see. At the same time, there's two motivations in this vote - pick someone you trust, or pick someone you want eliminated.

Jeff starts calling on the votes for Galu, the first one is for the olive Jason Statham, the next is for Shambo, who explains she got her name because she wore a bandanna, like she's wearing now, when she was in the Marines in 1986, the year after Rambo: First Blood Part II, therefore, people started calling her Shambo, and "that's her game name and that's what she's here to do, is play." Yes, just like the time Rambo played with his enemies that one time in that one movie.

The votes start pouring on for dreadlocks/black jacket/suit a.k.a. Russell, who voted for Shambo. The remaining majority of the tribe votes for "the better-looking Lennox Lewis." Arguable, I say.  Either way, Russell is leading.

Foa Foa begins voting for Jawline, who we can't help but already know he's a doctor, I mean Mick. Short and Stocky picks Flower Girl, Marisa. Jeff makes note of her smile. Mick chooses "yellow shirt, vest" - Jaison. Blonde and yellow tacks on another for Mick, and Jaison votes "girl with dark hair; Asian." Nailed it. Marisa voted for Short and Stocky; also named Russell. Two more votes for Jaison, "the tall, nicely dressed, Yale-type, black man." I paused to see how many sweater vests I could afford. Check it out, you can get a wool "Yale-type" education for about $25 on Amazon, in Big and Tall sizes, too! In the end, Mick takes the majority vote and leadership.

The leaders are now tasked to choose roles for their tribe mates in the opening challenge. Jeff tells them to pick a swimmer, and Mick chooses Jaison, citing that he looks like a swimmer. Yes, Yale-type black man is a swimmer, everyone. Even Jaison is surprised by the pick. But it turns out Jaison played water polo throughout college. Nuts to your first impressions! Mick is either psychic or oblivious, by the way. I can't find a picture of a black water polo player on the Internet. I'm flat out amazed. Russell chose the Brazilian-lookin' guy. Next is to pick the strongest; Russell chooses olive Jason Statham and Mick chooses Short and Stocky Russell. Next is to pick the most agile; Mick chooses Marisa (Mick, you pervert), and Russell chooses Yasmine, who wore heals. Lady, were you caught off-guard by all this? This is Survivor! Bring proper footwear! Last choice is to choose the smartest, and Mick chooses Liz, the Asian. Russell chooses Shambo, and I predict his doom at that very moment.

The tribes break to their spots, each selected tribe member with a specific task in the relay challenge. In the swimming leg, Jaison takes a healthy lead over John, who decided to swim with his shoes on. A clip is shown of Mike telling us that Afro-Americans aren't known to be swimmers. John slowly gets back to the beach. Short and Stocky Russell goes to work retrieving heavy bundles of logs. Erik is finally able to join him. He gets the first one, but Russell has his bundles in place before he can get his second one. The agile members crawl across a beam, Galu makes up a little time, and Shambo makes up a little more time during the puzzle assembly, but it's not enough. Liz finishes, Foa Foa wins fire. All of Galu hates John for being slow.

Foa Foa arrives at their camp, and while Mick and Ben tussle over leadership, we are introduced to Short and Stocky Russell, the reprehensible yet captivating Texas oil company owner who is just here to ruined everyone's day. His first order of business? Secret alliances with the dumb girls, of course! The Dumb Ass Girl Alliance (DAGA) is born! His next act is making an alliance with the old smart lady, Officer Betsy. He wants to be careful, but she doesn't trust him already because of his fast approach.

Over at Galu, Russell the attorney with dreadlocks begins delegating and Shambo is quick to be his right-hand man. There, I said it. John, who we learn is a rocket scientist, is discussing the ins and outs of modern shelter design and what influences throughout history have made an impact. Shambo is frustrated by all this discussion, and eventually, everyone tires of talking and retires to the water for a swim. Everyone except Shambo. She is old and old people aren't allowed to be included in swim time.

The first night at Foa Foa starts with Hurricane Katrina Dead Dog story time. At first I am reminded of Coach, but unlike Coach, Russell reveals to us right away that he never lived in New Orleans, and never had a dog named Rocky. After he sneaks off, Marisa confesses that she sensed him "angling" for sympathy. Russell, meanwhile, has sneaked away empty everyone's canteens. Destroying your own tribe's water supply, are you mad? His ploy is to eliminate the weak, but good god man. Not content, he burns someone's socks. At this point, I do not believe for a second that he's a millionaire owner of anything. The tribe discovers their water is gone, thinking someone already drank it, and Jaison is found to be the owner the destroyed socks. Ben and Marisa squabble over cooking, but Russell thinks its his doing.

Immunity challenge time! Cross an obstacle course of A-frame structures, pull a crate of puzzle pieces over a track and assemble it a the end. Galu gets out ahead by working together to help each of their members over and starts pulling their crate first. Evil Russell pulls at his crate like a crazed animal.

Galu gets their pieces just before Foa Foa, and after struggling, solves their puzzle for the win. They celebrate immunity by chanting that they are in the house and Foa Foa is sent back to think about who to vote off.

Mike, old guy and personal chef, is alarmed because he's old. He's campaigning on the "eliminate the weak" platform, which is code for female. Marisa tells Evil Russell that she is wary of him talking to everyone. As he stumbles through an explanation, in his mind, she has threatened him and it means war! How dare she catch him and confront him! He runs off quickly to spread his lie that she threatened him and now they need to get rid of her. Betsy still doesn't trust him.

Tribal council time! Ashley isn't worried much by the vote, and Russell ducks his question of why not vote her out right then. Mike seizes the opportunity to mention Milk-Bone underwear, which is illegal in 31 states, and says the other team got lucky on the puzzle. Jeff jumps on Asian Liz about it. Betsy identifies Ashley as the weakest link. Marisa says there's different levels of weak, and Ben, who probably hits his mother, disrespects her in front of everyone. Jeff pounces on the rift, reminding Russell he chose Marisa to lead the tribe, and Russell tells the tale of his victimization, how Marisa came after him and told him she couldn't trust him. Ben mocks her one last time after she explains that she was worried about Russell's behavior and the vote is on.

The first vote is Russell's for Marisa, as well as the next one. Ashley gets two votes of her own, then they each get a third. Marisa gets a fourth, a fifth, begins to pout, and is finally eliminated. Ben makes a shooting gesture as she gets up. I don't think it looked as cool as he thought it did. 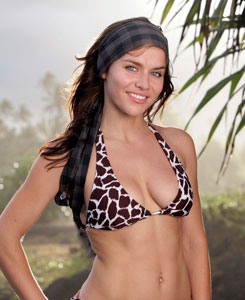