Previously on UNCOMMON SURVIVOR... we saw the craziest evil troll Survivor has ever seen in Russell. Evil Russell, actually, because there's two Russells. We'll call the other one Dread Russell. It sounds menacing, but in a good way. Everything else is pretty minor compared to Evil Russell's random acts of mindless destruction. The only thing that frustrates me about watching him is that he thinks his plan is working so far. Other things of note: this girl got voted out (her name doesn't matter now) for crossing Evil Russell and Shambo is still in the game. Do you think Shambo is really short for Ro Sham Bo?

As always with a recap, things that happened will be discussed herein. Leave a comment to join the discussion!

We start Day 4 at Foa Foa, and Evil Russell is so pleased with himself it makes me sick. Betsy the Policewoman, however, has him figured out. At first I thought she was just suspicious because the police are always suspicious, but I think she really has him pegged here.

Day 4 at Galu starts with a stand-up comedy routine starring Yasmin. Would you have ever guessed that she doesn't like camping or the outdoors? She walks funny during he rant because she has a rash, or bug bites or something. When it cuts to her confessional, I suggest she wear something with over-the-shoulder support. But nothing rings truer than her declaration that the 'hood is not the woods.

Back over at Foa Foa, Ben extends his repertoire of serial killer attributes with the murder of an innocent lizard. Evil Russell chats with Jaison and suspects there's an immunity idol hidden around camp. Jaison isn't sure, but Evil Russell looks around anyway. While looking around, he notices a tree in the middle of their camp with a big hollow spot near the bottom. If they hid it there, I'm going to throw something. It can't be that obvious. Russell leans into it for awhile, long enough for everyone to notice his activity. When they ask, he openly declares that he's looking for the idol. When he finds it there, disappointment sets in, then suspicion. This has to be a fix. No way did he just do that. Blind hidden immunity idol discovery, only not-so-blind? Impossible. Especially for Evil Russell. He meets up with Jaison later, revealing it to him to gain his trust. 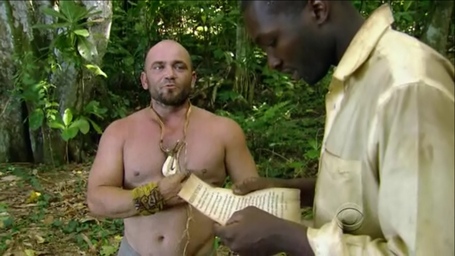 Day 5 at Foa Foa begins with Officer Betsy stealing Mike away to retrieve Tree Mail. They are already on the short list to be eliminated because old people bum everyone out. The rest of the team is already preparing to lose, discussing which of the two they will vote out when they are gone. Mike is desperate to prove he's not the weakest person here. Tree mail promises a rumble and Mike is ready to take someone downtown to Chinatown. Probably to tell them they are super smart.

Reward + Immunity Challenge time! It's part rugby, part basketball. One tribe member retrieves a ball, the other shoots it in the basket. The reward is fishing gear and twist. Monica (who?) sits out for Galu. The first round has men in the pit, women shooting, and right away, it's very physical. The dudes are hitting each other harder than reality show contestants should be hitting each other. Finally, Liz scores before Evil Russell kills someone and Mike smothers someone in his wrinkles. With Foa Foa up one, the women take the pit, and it's about to get sexy up in here... or really violent, I'm not sure. Galu has the brawn here, while Foa Foa is comprised of the remnants of the Dumb Ass Girl Alliance. The initial collision has Galu blowing the Foa Foa girls off the line. Before long, Laura is ripping Natalie's shirt off while choking her, Jeff has to warn them. Dread Russell takes a shot for Galu, but he comes up short, giving Shambo the opportunity to plow Liz. Jeff tells her, "Easy on the face." Check out the replay.

John scores for Galu and it's tied 1-1. Before the next round starts, Jeff warns everyone that the next cheap shot will get the perpetrator eliminated from the challenge. The warning doesn't seem to slow anyone down. A nice, solid collision starts the round and the survivors are tangled up with each other immediately. Before long, Ben hauls off and kicks Dread Russell in the shin, taking him to the ground, and Jeff stops everything to pull him out. I must say, Evil Russell is an asshole, but at least he's an asshole with a winning strategy. Ben is just a sore asshole.

The numbers advantage in the pit quickly leads to another Galu score. With Galu up 2-1, the 3 on 3 match up of men is back in the pit. Big hits start the round with Evil Russell looking like an NFL lineman. Eric and Mike tussle before Eric knocks him to the ground. Old Mike is stunned for a minute, he got knocked back to the last challenge where he was drooling on puzzle pieces. Laura nails the final shot and Galu wins reward. Jeff asks Ben what it's like to be the first person to ever be eliminated from a challenge, and of course he can't accept his wrongdoing. He's not going to cry over spilt milk because he's an outlaw. The twist is for Dread Russell to decide which of his tribemates gets to observe Foa Foa through the next tribal council. He chooses Yasmin, our home girl. Before Jeff sends Foa Foa away, he orders Old Mike to be checked out by medical. Busted!

Mike has his blood pressure taken, then he stands up only to collapse to the ground. That's all it takes. Mick goes, "I'm a doctor, too! I'm a doctor, too!" which gains him some undeserved camera time. The real doctor makes the call to pull Old Mike after a second reading of the sphygmomanometer shows lower pressure. Poor Yasmin is crying and it's not even her tribe. Mike is out and Foa Foa still has to go to tribal council, too! 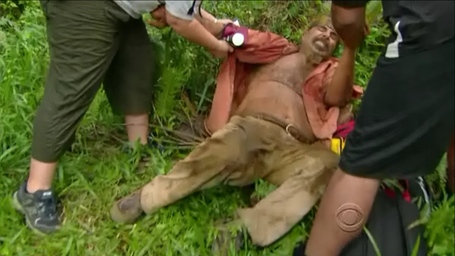 Back at camp Galu, Shambo takes off with the spearfishing gear. Because she is gone awhile, everyone anticipates a big catch. Shambo, however, is bathing in a swamp. But she tried, and she is confident that her effort will fill their tummies. She returns to camp to tell everyone that she caught nothing and lost the snorkel mouthpiece, but there's thousands of fish in the sea. I'd be okay with this explanation if I were being dumped, but she probably just punched her ticket off the island.

Speaking of punching tickets off the island, Yasmin's lucky Foa Foa doesn't get to vote her out. Her first move is calling everyone's attention on her and telling them that she wants to help them because she doesn't want to win so easily. She's put herself in charge and nobody likes it. She even wants to have a talk with Ben later in private. Excellent! Jaison is put off by her and Evil Russell hates her. She goes off to read her clue, and wouldn't you know it, it's a clue for the idol Evil Russell already has. Damn it all! Yasmin flags down Ben to question him as to why he tackled her so hard in the challenge. He takes the high road, calling her, "Grammar School," and the war of words has begun. He informs us that she has a big mouth, smells bad, has poor grammar, and is probably a hooker. Everyone else listens in while the two service-industry warriors lay in to each other's intelligence. Ben continues that he is not someone to be messed with, but the argument drags on, and as it does Ashley notes how much of a liability he is; running his mouth at challenges and getting kicked out of challenges. Ben tells Evil Russell that Yasmin is ghetto trash needs to go back to eating ketchup sandwiches and drinking Kool-Aid. Oh Yeah!!! This makes Evil Russell even happier, which only frustrates me more.

Night 5 at Foa Foa has Ben scraping flint and chopping wood while everyone else tries to sleep. When dawn breaks, Ben emerges from the forest with the crazed look of someone who's been scraping flint and chopping wood all night. Everyone's pissed at him and his tantrum. Officer Betsy lobbies hard to vote out Ben. For some reason, Foa Foa is hung up about it, and I'm convinced at this point that they're all idiots. Everyone go home now because Evil Russell is going to annihilate you all. He's gunning for Betsy, she "threatened" him, after all, and they're getting played like fiddles. He's got his immunity idol, the trust of a strong player, a patsy to carry with him in Ben, and an execution list. I have to admit, I thought he wasn't bright enough to pull it off, but Evil Russell has all his pieces in place here in Week 2.

Tribal council time! Jeff pries immediately for the dirt on Yasmin's visit and gets what he wants when Liz mentions the "minor incident" with Ben. Ben spins his side of the story and calls her ghetto trash before Evil Russell gives his stirring speech on how he was victimized when she came into his house and called him a baby. But Jaison doesn't flow with that, he wants to win challenges. He wants to prove it on the field. You have to respect that kind of sportsman. Win a challenge and you don't have to bring anyone back to your camp. Jeff asks Mick, the leader (who knew?), but Mick is fine with it. He's no leader. Betsy throws Ben under the bus citing the challenge, the 415 with Yasmin, the night chopping. Jeff asks Ben if he regrets his infraction. Of course not, Jeff! Those were sissy rules! 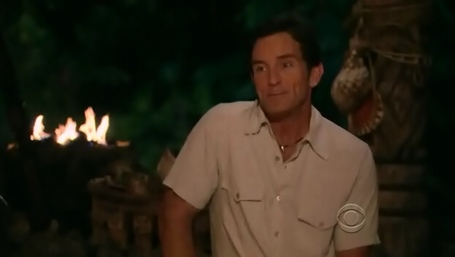 I'm glad he's as annoyed by this as I am. Ben still believes he can win the game with how he's acted so far, but the last time I thought something was impossible, I watched Evil Richard pull a hidden immunity idol out of his urethra, so I'm not going to say a thing. 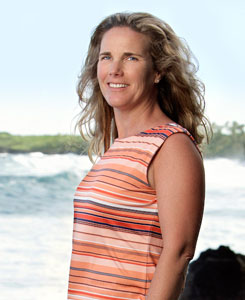 Next week: Jaison declares war on Evil Russell and Shambo is still an outcast.