I really should have blogged this while I was watching because trying to remember all the good parts from a two hour episode seems so daunting.  I should have at least took some notes.  I remember there were some good quotes that I wish that I written down.  Next blog will be better, I'll be more prepared. 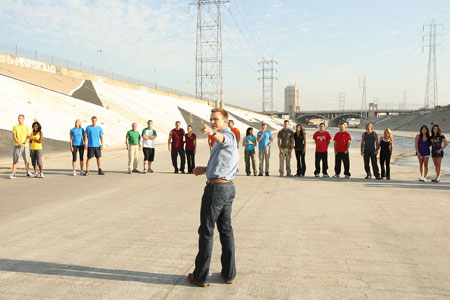 I didn't like the way this season of Amazing Race started.  CBS decided to eliminate one team before the race even started.  Twelve teams stood in the LA River basin and were told of the news.  I thought the idea of telling a team they were going to be on the Amazing Race only to have them lose a challenge before the race even starts and be sent home was cruel.  Imagine the excitement that these teams felt going into that day and one team just had to turn around and go home.

The teams were frantic to find a Japanese license plate attached to a fence in order get their first plane ticket and be sent on the Amazing Race.  In the recap they use the right word... "Pandemonium".  I totally would have peed my pants if I heard that I was going to be eliminated before the race even started. 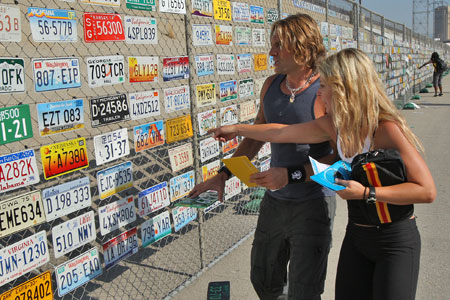 I was a bit nervous at home because I was afraid that a team that liked would be eliminated. Fortunately for the viewers Team Yoga was eliminated, I don't think we'll miss them too much.  It might have been cool for  douchebag meathead Lawyer to be eliminated because it would have been a crushing blow to his extraordinary ego and he probably would have tried to sue CBS or something, it was probably for the best that he wasn't.  I think he'll provide some entertaining moments and he's a good guy to root against.

The teams this season are being really secretive about their lives outside the Amazing Race hoping to gain an advantage.  The two Poker Player chicks are telling the rest of the teams that they work with homeless teens instead of being rich and successful poker players.  The Gay Brothers think that they are going to get all the women to fall in love with them and so they aren't telling anyone they are gay.  I don't know who they think they are fooling, these guys are so flamboyant.  Did you see them run through the flooded streets in Vietnam later in the episode.  These are not straight men!  Oh, but they're plan is working because the Poker Chicks are falling in love with them.

The teams travel to Tokyo and arrive at the set for a Japanese game show.  They spin a wheel until it lands on a Wasabi bomb.  For some reason eating Wasabi doesn't seem that hard to me, but then again I've never had that much.  When the team finishes their Wasabi roll in 2 minutes or less they take a bunch of Japanese tourists onto the crowded, congested streets of Tokyo to find Phil. 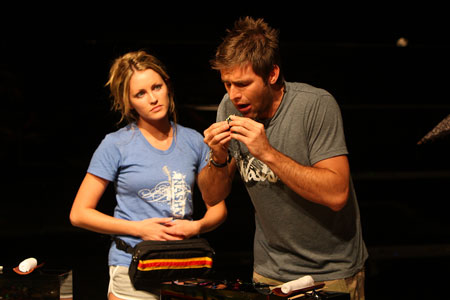 Two teams failed to eat the Wasabi bomb in the allotted time.  They were Team Poker and Team Interracial Marriage.  They both had to eat a second bomb.

Teams took to the streets and there wasn't much to tell except that two teams lost some tourists along the way.  Fortunately for Team Country Singers their Japanese Lady was just a little late showing up, unfortunately for Team Poker they lost two and never found them.  They came in last but were not eliminated, instead they had a 2 hour penalty. 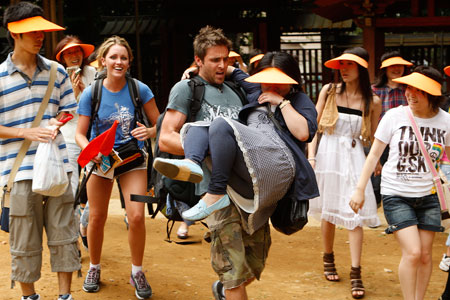 The guy from Team Country Singers admits that he's a virgin who's saving it for his wedding day.  His girlfriend on the team, makes so no such claim.  She also calls him a "diamond in the rough", I think she meant it as a compliment but she's pretty much saying he's ugly right?  In any case, she's right he is ugly.

The teams are off to Vietnam.  In the airport a tourist recognizes Team Poker as the rich poker players that they are.  Their secret is out.  What are the chances of this?  Who recognizes poker players?  The rest of the teams act like they are angry but get over it quick.

Team Poker player notices Team Gay Brothers have really gay looking passport cases and call them out on it.  Somehow even still Team Poker doesn't realize that they are the gay, must be wishful thinking.

Vietnam is seriously flooded.  The entire city is under about 2 ft of water.  There are two buses and the second bus is leaving an hour after the other.  The teams on the 2nd bus pony up the money to get the bus driver to leave earlier.  I'm really starting to like Team Asperger's Syndrome, the guy with Asperger gives a Vientamese guy his rain jacket.  Everyone agrees that it's a nice gesture but not necessarily smart because he might need it later.

The challenge doesn't open until the next day.  The teams have to spend the night on a few lawn chairs while being soaking wet.  The challenge is to take boats to some mud pits where the teams must fertilize trees by surrounding them with nutrient rich mud.  It's a messy job. 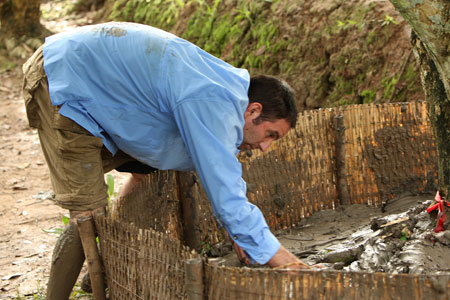 Next up they race to round up some ducks.  They have to herd ducks into enclosures.  It's frustrating for all those involved.  The guy with Asperger's syndrome is super calm and eerily good at herding ducks.  Teams call him the duck whisperer. 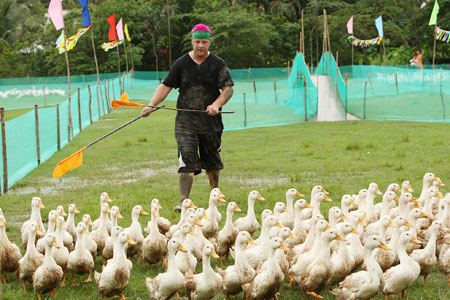 Garret and Jessica are slow herding the ducks and fight a lot.  They are eliminated.  They've been dating off and on for 7 years, it doesn't look like they will be getting married after all.  On what the future holds for the rocky couple, Garrett added, "I don’t know if we’re closer to marriage." 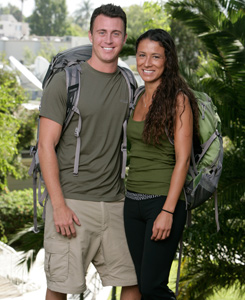