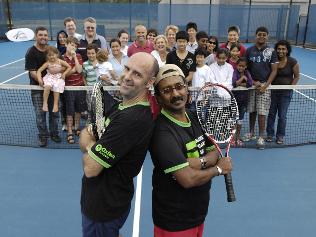 Gavin White and Jeganathan Ramasamy, pioneers among sportsmen, just invented Endurance Tennis to raise money for Haitian earthquake victims. These two men, strangers when they began playing, set the Guinness record for longest single tennis match ever played at 37 hours and 32 minutes. Well, maybe they didn't just invent it, there was a previous record after all. How do you play? Well, you start by playing regular old tennis, and then you keep going. Okay, now keep going. More. No, more. MORE! Play for 8 hours or more and you're on your way.

So how did this unlikely duo come together?

Gavin had placed an ad in the local paper, keen to find a partner to break the previous record of 36 hours and 36 minutes and raise money for the Haitian earthquake victims. Jega was the man who answered the call.

I shudder to think what the craigslist responses would've been. "Hey, let's play tennis all night long. Call me."

These guys are my heroes for this reason:

Neither had trained for the attempt and Jega said he'd responded to Gavin's ad because he always liked a challenge. "I thought this crazy man; I should join this crazy man," he said, pointing at himself and his partner.

Look at that, no training! That, and the fact that I thought the same thing about jbox when I answered his craigslist ad.

To donate to their cause, vist Gavin White's link at www.everydayhero.com.au or www.salvationarmy.org.au. Or anywhere else Haitian donations are accepted.