Share All sharing options for: Cash incentives for Olympic medals... in Russia 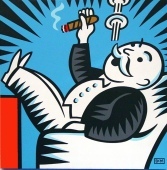 When I think of countries that would offer cash and prizes as incentives to their gold medal athletes, I would leave nations that are or were Communist at the bottom of that list. Maybe that's just my ignorance, but this was surprising.

The Russian government will award gold medalists with a $100,000 prize and a luxury car, silver medalists will receive $60,000, and bronze medalists will receive $40,000. While these are pretty small numbers, numbers that American reality show contestants would scoff at, I have to admire the Russian government for at least putting the bounty out there. I wish our government took the Olympics seriously. Americans only get the chance of sponsorships, and you can't make it rain in the strip club with Wheaties boxes and Five Dollar Footlongs.

The article says the prizes will be in dollars, but that seems strange. Perhaps they mean Rubles? If so, one Ruble is approximately three and a third American cents. So first prize is actually $3,297.24, second is $1,977.97, and third is $1,318.79. That's quite a bit less, but at least you can pay for bottle service.