Some People Hate The Olympics

Share All sharing options for: Some People Hate The Olympics

The Olympics; it's the league that's got the whole world in its hands. But some Vancouverites aren't as excited, or even politely hospitable, as you'd think Canadians would be. This depressing blog post by Dave Zirin got me all bummed out, so I went searching to see just who these Olympic-haters are and just where they get off.

Mr. Zirin makes a pretty good case in his post; things like the exorbitant cost of $6 billion seems pretty scary, because who can count that high? Then you're told, "These fine folks with calculators say we'll make $10 billion," and you feel pretty good about that arithmetic.  But then some other guys got together with their calculators and said, "No, you will make $100 million dollars," and they didn't say it in a humorous Dr. Evil kind of way, either. Then you frown your Vancouverian ass off.

The face of the Anti-Olympics movement is Chris Shaw, an American-born scientist and professor at the University of B.C.  He's upset because he had a little tear gas shot at him one time. Now he hates the whole IOC:

He soon came to see the Olympics as little more than a scheme to make developers rich, help sponsors market their brands and funnel money back to the International Olympic Committee - itself effectively a multinational corporation that uses its brand to exert enormous influence over host governments, Shaw believes.

Well, that's just terrible. How dare they be a corporation that exchanges currencies. It's those damn multinational corporations that don't do anything but provide goods and services for money, yeah, that's the problem! They're evil because... profit! Yeah!

Who else hates the Olympics? Beyond the well-educated Mr. Shaw, it's the usual bunch of anti-capitalist, anti-war, anti-everything groups; the ones who can't give you a thoughtful, coherent argument as to why we should resist the Olympics without mentioning Hitler in their very first reason. Their second reason for protesting the Olympics also protests against the existence of British Columbia itself. Another reason is that there's 68 missing/murdered women in Vancouver. Another group with similar views has decided that rioting is a better alternative to having an Olympics: 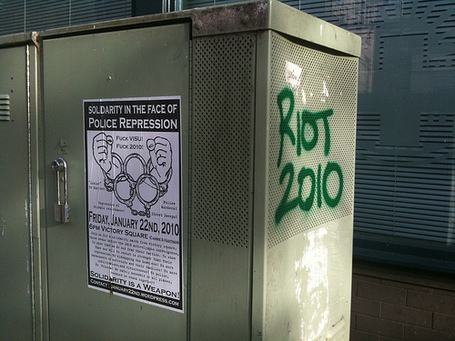 So, while Vancouverites have plenty to be upset about, what with all the mismanagement of expenditures and the massive tax burden (in this economy?!), the rest of us can sit back and enjoy the pure spectacle of world class athletes competing to make their nations proud, on the network that just pissed everyone off with their programming lineup drama. When the Games end, if you still feel bad about Vancouver, you can probably make a donation, but let's be real, you've got limited funds, and some other people are in worse shape.

As Olympics near, people in Vancouver are dreading Games - Dave Zirin - SI.com

The Dark Side of the 2010 Olympics - matadorchange.com