Last time on UNCOMMON SURVIVOR; The tribes had a key party and went home with different companions. I imagined this to be because CBS couldn't let their primary demographic witness their comrades' complete and utter decimation at the chubby, infantile hands of the virile young tribe. The switch was a change for everyone, and the rules of the old folks didn't sit well with the younglings. A decisive challenge victory by Fabio forced the blue tribe to vote out Tyrone.

So, how about this weather? Enough pleasantries, my Internet is spottier than a dalmatian that cooked bacon without a shirt on, so this is going to be short and sweet.

Day 15 opens with Dan telling Holly he's going to quit. He doesn't like the rain. A former almost-quitter herself, she tells us that he needs to man up.

Later that day, Holly and Yve are gathering wood. Yve asks Holly what was with the secretive voting and Holly tries to shed blame, saying she thought Yve had been allied with Tyrone, and maybe she should be more open next time. Holly tells her that Dan wants to quit, so Yve intends to use that to her advantage.

Over at yellowtown, Jill and Marty wake up early to pat themselves on the back. They think they're better than everyone else because the kids just want to sleep all day. I would, too. That weather sucks. Brenda explains the lines, it's Marty & Jill versus the rest of them. She plans to do the ol' Split-the-Vote-to-Flush-Out-the-Idol maneuver between the two of them.

Challenge Time! Jeff takes the idol from Fabio and unveils two new immunity necklaces, further explaining that there will be two eliminations tonight. The goal: dig up three rope rings with an oar, flip them into a petticoat contraption, and hang them on a cross. Winners move on to ring toss where they'll be hollered at by carnies, compete for the over-sized, unlicensed Bart Simpson doll, and win a feast/eavesdropping party for their tribe. This challenge is designed around good rump-shaking skills, so I wouldn't have expected Holly to win, but she did anyway. For the other tribe, Jill edges out a win over Kelly Leg and then stages a nice comeback victory against Holly to win the feast. You knew Brenda's plan was screwed when they announced it to us barely five minutes in. Oh, and lest we forget, the two worst performers were Dan and Kelly Legs.

When La Flor returns to camp, they do a huddle-handshake thing. What are those called anyway? Brenda isn't fooled by this token gesture. She's still determined to get either Jill or Marty out, despite this worst case scenario. I like her determination, she's quiet about it and smiles at the right times.

Brenda and Sash decide the new plan is to split between Marty and Kelly Leg. They're going to tell her to vote for Jane. Poor Kelly Leg. She's proven herself able to compete, but the leg may still cost her the million in another way; fear of sympathetic votes.

Meanwhile, Marty's spending quality bro time with Fabio. He quietly tells him he's a grand master of chess who beat an Argentine grand master twice when he was a kid. In reality, he's not a grand master, and the Argentine name Marty throws out was actually a tennis player. Marty boasts he could throw out any name from the 70s and the kids wouldn't have a clue, but I maintain that you could throw out the name of most current tennis players instead and nobody would be the wiser. Sorry, Dick Enberg and The Daily Forehand. Marty continues his sweet talking and Fabio is highly impressionable.

Over at Espada, Holly is disappointed she didn't win the feast. Holly takes Dan out into the woods to check his health a.k.a. tie him to a tree and shoot him. Dan tells us everything is bad and he misses his expensive cars. Chase and Benry can't figure out what to do, neither can NaOnka. Yve tries to make her play to Alina and NaOnka, but she mentions her strong ties to the other tribe in the process. Nice one.

Holly, Chase, and NaOnka debate some more. Still, nobody can make a definitive decision. Holly is a die-hard follower, "100%," she says. NaOnka tells Chase he needs to decide, not with his heart, but with his gut. Keep guessing, NaOnka, you're bound to accidentally guess the correct organ for thinking sooner or later.

Back over at La Flor, IS THAT A BOOB? Nope, never mind, it was just a blurry knee. Brenda mouths to Jane that she's safe and leads her off to explain the plan. Jane is fully on board. She thinks Marty and Jill are conniving, which I think is a little extreme. Their secret planning has been legal and, I guess, moral, that we know of.

Sash tries to sway Fabio into voting for Marty. Fabio isn't sure, he likes Marty. He doesn't know how to play this game at all. He doesn't even know if they want to flush out Marty's idol. Sash also tells Marty to vote for Jane. This is getting to be a very complicated puzzle, and it seems to be working. Marty asks Brenda if they're locked on Jane and she asks him if he talked to Sash. That's how close they are to outing themselves as the puppet masters!

La Flor Tribal Council: Marty talks for awhile about his idol. Brenda has some short words suggesting she's not fooled. Jeff asks Kelly Leg if she feels comfortable, and she does, so the lie's working there. Jane is asked if she feels like she's part of the majority, but then Jeff asks Brenda if Jane has to worry, and Brenda tries to pin the idea of putting votes on Jane as Marty's idea. This causes an argument that spooks Marty and he changes his decision on the fly, mouthing to Jane that she should vote out Brenda. Too bad for him, in her own words: Jane ain't no sittin' duck.

Voting time! Marty calls Brenda various poisonous animals. But isn't that what makes her great? If only she could stay silent at the times when you're supposed to stay silent. Jeff asks for Marty's immunity idol and everyone tries to stealthily glance in his direction. He decides to hold it and Jeff reads the votes: three for Marty, two for Brenda, three for Kelly Leg, forcing a tie. The tribe has to vote again, with the exception of Marty and Kelly Leg. Kelly Leg gets all the votes from the second one on and she's eliminated. Marty looks like his mind has snapped. Thunder strikes and rain begins to fall as La Flor moves over to eat. 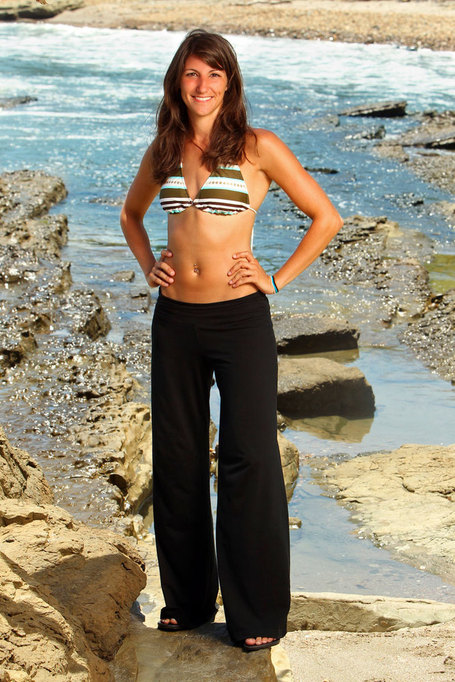 Ok, last time Tyrone had 6 toes, and that was weird enough, but Kelly Leg now has TWO LEGS?, via www.cbs.com

Espada enters. Jeff twists the knife, questioning them about the sights and sounds of La Flor's feast. When NaOnka refuses to look, Jeff asks Fabio to describe it. Jeff sure knows the buttons to push. A couple questions to Dan, and Dan thinks he's unbeatable; on top of the world. Yve is all like, "Naw dog, naw, you were crying just the other day." Dan denies ever wanting to quit, he just complains a lot. He feels like Yve's just singling him out because she's worried about herself. Yve admits she feels like she's on the chopping block. Dan calls her arrogant, but can't really explain why, after admitting he talks about his multiple cars and houses a lot. I don't think he knows what that word means. Who ever heard of an arrogant homemaker, anyway? Jeff asks Alina to confirm if it's just between Yve and Dan. She confirms. La Flor is shuffled off before Espada votes.

More voting time! Jeff reads the votes, the first two are Yve's and Dan's for each other. The next are all for Yve. Sad, too, her Survivor Hotness Factor was really coming along. 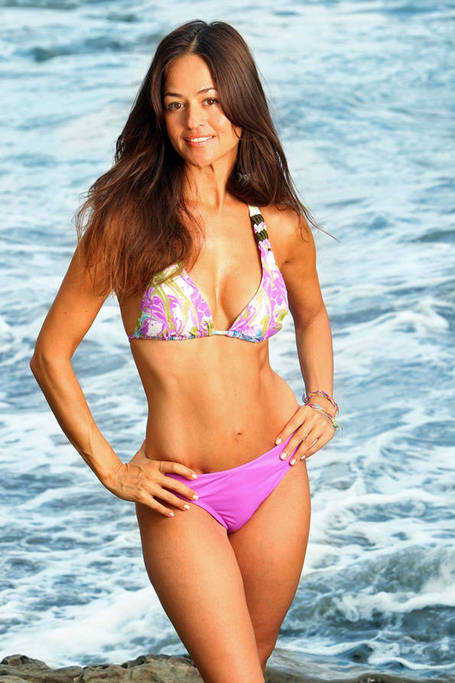 What is it they say about women and wine? You're supposed to put your nose in first? via www.cbs.com