Last time on Uncommon Survivor, I left jbox in charge. He came in off the sidelines with his game face on and won the Super Bowl of writing Week 3 on time. Expect him to lord it over us the next time he writes something, wearing some gaudy ring, talking about "guts." We'll never hear the end of the time he saved the day and won the championship of hitting post.

Right after the vote, the football gods are punishing the cast of Cocoon for voting off their son. Worst Jimmy is so excited to be the team's best Jimmy now, that he starts to sing while going around giving hugs to his shivering and unwilling tribemates. Marty's Survivor boner is stoked by Worst Jimmy's annoying personality. I'd like to see Worst Jimmy and NaOnka in some kind of unintelligible word shouting match. That could be a sport. Score points for polysyllabic words, lose points for using real words and spitting.

The morning after the storm, all of Del Boca Vista is washed out with mud and run off. Worst Jimmy decides the best way to fish is to be a pelican, but that doesn't incorporate their fishing net, nor does it include slinging any muddy water at the camera, so he does the next best thing. Everyone sits around watching him throw the net a few feet into the water while coming up with a new excuse why it's not working. This is from someone who claims to be a commercial fisherman. Jane already misses Best Jimmy.

Over in the nursery, NaOnka is too dumb to realize it has rained. Brenda has spent time decoding the secret clue and they go off to find it together. Too bad for Brenda, NaOnka grabs it first and declares it to be hers, because she figured the clue out by herself, which is news to everyone watching. She hides the idol in her Fabio's sock and brags about pushing Kelly Leg. Brenda and NaOnka walk back to camp trying to look nonchalant and as soon as they're back, Kelly Leg and Alina retrace their steps back to where the idol was found. NaOnka decides she has to follow them and thinks she's going to scare them with confrontation, but it quickly turns into NaOnka just repeating that she doesn't like Kelly Leg. She's also very jealous of that leg. If only NaOnka had one leg, everyone would love her. The most frustrating part of this interaction? Kelly's boob was blurred out.

Over at Base Station Metamucil, Marty is diplomatically nominating Tyrone to lead in the next challenge. Someone desperate for leadership quickly seconds this motion and it's too much for Worst Jimmy. He rambles for awhile, saying nothing specific. Marty does the best he can to reply to the senseless ramblings, but other than begin worshipping Worst Jimmy, there's not much he can do to prevent what is eventual: Worst Jimmy hating Marty for being a better leader than he is. Those of you playing Survivor bingo at home can mark off the following squares: "someone is called a 'bitch'" & "he or she wouldn't last a day in my world."

The old folks get their tree mail the next morning; something about blindfolds. They spend the rest of the morning listening to Worst Jimmy tell Tyrone how to talk and the others how to listen. Marty reveals nominating Tyrone was part of his plan to troll Worst Jimmy. He also diagnoses Worst Jimmy with paranoia and delusions of grandeur, adding that anyone who thinks Jimmy Johnson's insecure because of their own leadership skills has problems. I'm quickly warming to Marty here.

Challenge time! The challenge? Blind-foldy Sears shopping spree: pairs event. The kids decide this is a good time to use the medallion of power, so they get a two item head start. Melon-knee Daniel sits out for the oldies while the Kellies sit out for the kids.

The challenge begins and the kids take a quick lead under Brenda's precise direction. Tyrone struggles naming all manner of theoretical directions, at one point causing Marty to trip. It continues like this until the kids have a 10 to 5 item lead. Worst Jimmy doesn't know left from right or he's deaf. Tyrone is too frustrated to keep shouting as the kiddies take home the fishing gear, the tarp, and the cookware. Worst Jimmy's excuse was that he couldn't hear with all the yelling. 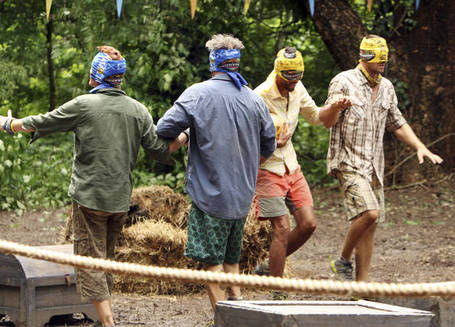 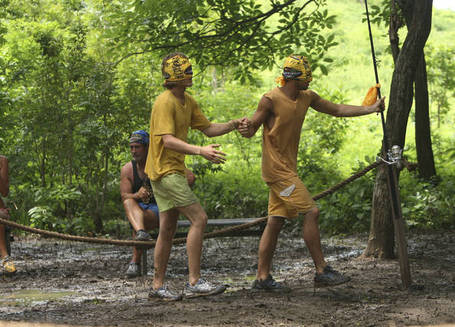 Having returned to camp, Daniel tries to give them credit since the challenge was so difficult. Tyrone even tries to boost their egos by telling them the other team needed the advantage to beat them, forgetting that it was only a two item advantage and they lost by five. Worst Jimmy again pleads for an opportunity to shine. He doesn't think he could have done any better, but he wants to be given equal share. Clearly, this man's reality is a strange place. Marty best be trollin' this jerk.

Over in Children's World, the kiddies check out their new toys. Chase discovers a clue hidden in the bottom of the tackle box and immediately closes it. I want to know how many other items had clues hidden in them. While everyone else celebrates the tarp, Chase removes the clue and hides it. It's just the thing that will make Brenda love him! The clue is a clearer version of the clues Brenda already solved. He shows it to her and they head off towards tree mail together. As they get close, Brenda starts asking Chase if he trusts NaOnka, saying she has something to tell him, and what would he do if someone already had the idol. This is extremely disappointing. Here I thought Brenda had some wits, but as soon as she was cornered, she cracked. This after mentioning she helped find the idol as if it were worth partial credit. Then she doesn't want Chase telling NaOnka that he knows, because NaOnka won't trust her anymore. I hope the football gods destroy them.

The fogies are out looking for sea urchins to eat. I like sashimi, but I've never tried uni because it looks like gross orange brains. While the group searches tide pools, Worst Jimmy is constantly talking. Poor Jill is trying to tell us about the sea urchin while Worst Jimmy is blabbering on in the background. Worst Jimmy spies Marty eating some of the urchins he found on his own and calls him out for not contributing, not being a tribe player. Worst Jimmy's plan is obviously to make him look bad in front of everyone, but it just pisses Marty off. Marty gives us a graphic metaphor for what Worst Jimmy's just done and unleashes his plan to Jill to recruit Tyrone with Daniel and himself to get rid of Worst Jimmy. Jane tells Holly she's decided to vote for Daniel because that was what Best Jimmy would have wanted. Jill reports back to Marty that Tyrone's not on board, so Marty pitches him the deal. While that's happening, Worst Jimmy is telling Holly and Yve how, stop me if you're heard this one: he just wants one shot at one challenge. You have? Well, shit. Are you sure? Damn. Even the one where he's not saying he would have done anything differently, but he would have won? Aww, hell. Well, at least he's grown slightly aware that he's the only one doing all the talking.

Tribal Council Time! Everyone enters. Jeff opens asking Tyrone about the challenge. Tyrone says it went well, Worst Jimmy springs up, and Jeff makes him repeat the answer. Tyrone thinks they would have won the challenge if the other team didn't have the advantage. Marty is asked if he agrees, and he says they lost by one item before Jeff corrects him. Jeff asks Daniel if he's worried because he can't do challenges in the mud... in the rain forest. Jill is asked if that affects her vote and answers that losing is bugging her, they've gone through an NFL coach and they're still not winning. Worst Jimmy is asked about going through an NFL coach and suggests they try mixing it up... by letting him be the leader. Marty is asked if he's open to giving Worst Jimmy a shot, to which he answers no, because Worst Jimmy is a crazy person. Another quick hat tip to Best Jimmy steams Worst Jimmy even more. Worst Jimmy says he's offering leadership, and if they don't want it, that's fine; which is a lie because he would have shut the hell up six days ago if that were the case. Holly interjects with some extremely brain dead addition that maybe you give the 6th string player a shot, because they might be better than the 1st stringer, but you never know until they have a chance. This is coming from a swim coach. I hope there's actual adults supervising her when she's with the children. Jeff asks Tyrone is Worst Jimmy would be more valuable as a follower and Tyrone answers in the affirmative. Jeff asks Worst Jimmy if he can just be a follower because it's what the tribe wants, since he's such a team player. After telling himself how he's man enough, Worst Jimmy decides to try to be a follower and holds back tears. Jeff asks him if this is painful and he needs a moment because he's crying. He swears he's gonna be the best damn worker bee this tribe has ever seen, and not nobody's can take that from him, nobody's I tells ya, nobodys.

Holly votes for Daniel and apologizes about his shoes. Daniel votes for Worst Jimmy, as does Marty.

Jeff reads the votes, reading off three for Daniel before getting to three for Worst Jimmy. A fourth is read for Worst Jimmy and the final vote eliminates him. So much for being the best worker bee. Marty is pleased as punch. 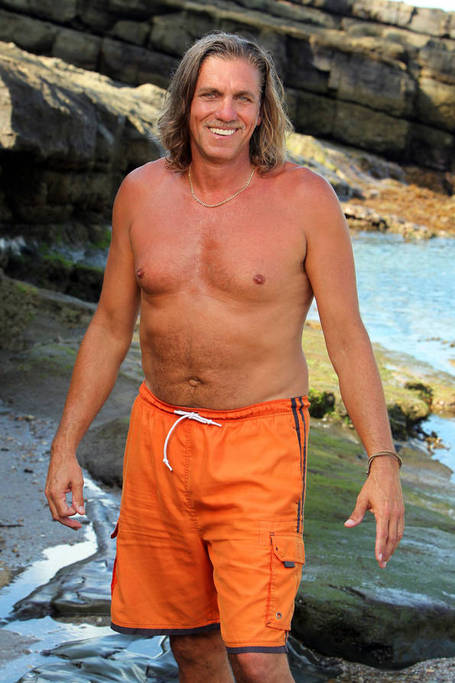