Previously on UNCOMMON SURVIVOR: The Merge happened, which was topped by Nasty NaOnka's thievery of the Merge spoils, with which she implicated outcast Alina and sent her home. This was not before Marty could declare all out war on sweet ol' grandma Jane.

This post is brought to you unofficially by winter squash. They're high in dietary fiber and vitamins and are an excellent source of complex carbohydrates. They're also involved in more Uncommon sports than any other produce. Sorry, Bobbing for Apples fans. Thanks again, winter squash. We salute you.

Upon returning from the vote, NaOnka tells us both of the adverbs she knows; really and rully. Everyone seems unsettled by Marty's attack on lovable Jane. Jane is less enthused with the situation herself. Being called out has hardened her resolve to beat "Farty." Her eyes look reptilian in the dark. There are few things scarier than a southern woman threatening to physically beat you in the dead of night.

Marty's assessment of the situation the following morning seems clear. He's frustrated that nobody sees how big of a threat Jane is, but complaining about the stupidity of everyone else has an unappealing air of arrogance. He understands the game, he should know stupidity plays a huge role. Marty hatches his plan to Dan and Benry to say they're voting out NaOnka next time, but instead vote for Jane. Jane sees all this scheming and wants to beat Marty even more.

Reward Challenge Time! I don't know how to describe this challenge other than to say it's how I imagine professional locksmith scouts assess the talent of college locksmiths at the locksmith Combine, except the winners here are forced to cross treacherous forest terrain at tens of miles an hour through the air until they are rewarded with a full feast. The teams randomly divided themselves into male and female and Chase is forced to pick who he's hitching his horse to. He chooses the girls, which is only a surprise to the dudes. He loves Jane and Brenda, of course he'd pick them. The challenge begins and it's neck and neck until the women get stuck ramming their toothpick bodies into a wall of toothpicks. The men gain a lead but are hampered by Bum Leg Dan. I bet he wished he had Kelly Leg's leg about then. The women stand to catch up, but they're also hampered by Jane, who is completely floundering out there. The men get two of their locks undone but the third one is stuck. It's okay, they have plenty of time. The women huff and they puff, but they can't blow that brick wall down. The men win easily, taunting Chase for his lack of faith in them. Kelly Legs starts to cry. Jeff offers the men the opportunity to change places with one of them, but nobody gives a damn about Kelly Legs. Marty says watching Chase join Jane was like watching the movie Dumb & Dumber; he doesn't get it. My feelings are hurt.

The dudes head for their reward. Benry says he couldn't think of a better group of four guys to be with. Somebody has no friends back home. Marty cheers his own name as he zip-lines. Benry rubs the rope inappropriately. They all arrive at the feast and Marty lays out every detail of his plan while he has all their ears. Everyone seems to be with it except Sash. Fabio, seemingly out of nowhere, asks what everyone thinks Brenda thinks about Chase. It's such a Fabio question I'm not sure if it's game-related or he's got a crush on Brenda. Sash tries to downplay his connection to Brenda, saying she's committed to him 100%, but he's only committed to her 95%. Then he tells us he like Marty's plan, but he's going to side with Brenda anyway. Where's the 5%, bro?

The losers share a loser huddle back at camp. Holly praises Chase for displaying the character to choose his obvious favorite given a choice of two. Brenda pities his poor decision-making skills, his pheromones must smell like defeat. She'll never let him fertilize her eggs now. Chase says he went with his gut, which is his word for penis. They all plan to get rid of Marty but Brenda isn't so hot on the idea. Chase talks to Holly about Brenda, she warns him not to annoy her. Holly says all he can do is trust her, the worst advice I think I've ever heard on Survivor. She may as well tell him to pray. NaOnka has similar useless reasoning but does tell him that he shouldn't annoy her, and it ends with Chase sitting down with Brenda and NaOnka so that he can annoy her. She's really fed up with Chase at this point, mocking him and calling him a baby in her confessional.

Tree mail time! It's a memory test. Jane's plan? Pray; pray that her deities will come down and decide the outcome of this reality show mini-game to defeat the "diabolical" Marty. She mumbles something about the fat lady singing and her being the fat lady but she's not fat. Yeah, whatever, have another fish, Gollum.

Immunity Challenge Time! Nicaraguan Simon: 16th Century Imperialism Edition! There's only one immunity necklace this time. The challenge begins and NaOnka and Jane steer their way out on the third symbol. Dan coins his way out next. Holly, Kelly Leg, and Sash all go down by musket. The second round begins and Fabio's ship is sunk on the second symbol. Chase can't cash in a correct answer on the next one. Benry falls on his dagger, leaving only Marty and Brenda. They both get the next two symbols, but Marty can't remember the last one. As soon as he holds up his guess, Brenda knows she's won.

After the challenge, Benry and Fabio share unripened seed pods. Fabio says he hates playing dumb so much, but it's the smartest thing to do. Yeah, playing. The boys decide they're just going to lay low. Everyone loves a plan that doesn't include getting voting out. Fabio calls his strategy, "bein' cool." Brilliant. I mean really, rully brilliant.

Marty and Dan tell Chase they're voting for NaOnka and why. Marty even puts it in to football terms so Chase can relate.

NaOnka knows she's going to be targeted and she's ready to play the idol for herself. Chase talks to Holly about what Marty's plan is. Chase believes they're trying to use NaOnka as a red herring and Holly asks him what Brenda's doing. He says he hasn't talked to her. That's because she's being told by Marty that it was Sash's idea to pretend to vote for NaOnka and blindside Jane. He reinforces this by saying everyone else is on board with it. He knows how to work in this game, he even approached Brenda politely and promised not to bother her about it again. Brenda likes this plan, but she has to confer with Sash first. It's important to her that she be the one making decisions in the game. The two meet up and decide they don't like the way Jane's group is getting uppity about Marty. Sash likes Marty because he's a good cook and he tells him everything. She repeats that she's a big girl making her own decisions. She's obsessed with being the one in control of the game in an Evil Russell kind of way.

Tribal Council Time! Alina's brought back out. Work it, girl. Jeff opens by talking about the challenge. Some talk of bonding is brought up while the boys were away. Jeff does his usual asking who thinks they've got a target on their back before Marty mentions NaOnka's thievery. She would rather they not talk about that. Marty pushes further, repeating the words lie, cheat, and steal. Some of those are Commandments. This sets her off into a two minute rant that ends with a sort of hooting holler that takes over when she's run out of words that are too big for her or banal clichés she's proudly trotted out with the tact of someone who's spent their life hearing a language they never bothered to learn. My favorite was humanitarian. Jeff comments on Fabio trying to stifle his laughter. Fabio says what she said doesn't make sense to him, that sends her into another tirade that is standard fare for your typical, poorly educated narcissistic personality disorder head case. She even says a few words that make the censors have to drag the vagina-hider blurs up to her mouth. By the end, Jeff is speechless.

Voting begins. Jane thinks Marty is a bad parent. Marty draws a dead fish on his vote for Jane. He walks back a way that trolls NaOnka hard enough to get her to give him the finger; or some gesture I'll pretend we don't know. Jeff goes to tally the votes and asks for any idols to be played. NaOnka does nothing. Jeff reads the two we know and then reads off three for Jane. Marty smiles confidently. A couple Marty votes are read off. Marty still nods and smiles confidently. When he hears his name a fourth time, he seriouses. When he hears a fifth vote, he sads. The sixth vote eliminates him. 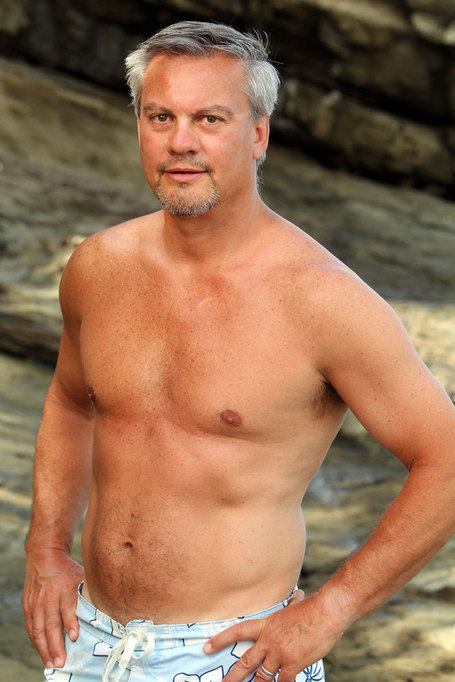 Next week: A day from heck.