Previously on UNCOMMON SURVIVOR; Sash and Brenda's power play to get rid of Marty remains unexplained. It's as if the puppet master have cast away their marionettes and taken the stage for themselves, singing that they've got no strings to hold them down, to make them fret, or make them frown. The good news is, they'll probably be swallowed by a whale. During the recap intro, Jeff calls Sash and Brenda the king and queen of the beach and I'm avoiding the obvious joke about Sash being the queen. There'll be plenty of time for the low road, I'm sure; NaOnka is still playing.

This post is brought to you by motherf_cking antimatter. Yeah, we're just making the stuff and trapping it now. Don't ask me how, but this makes me feel like we're that much closer to hoverboards, which improves every sport there is, and will ever be. The importance of trapping antimatter lies in the studying of it and the ability to skin it for its luxurious furs that we can use to barter with the alien people of the antiverse.

Upon returning to camp, Brenda is put at ease that they've beheaded the insurgent alliance. She guesses Sash and herself have a king and queen alliance going, but she thinks he's the queen, too. See, I didn't have to. While Brenda rests, Holly and Jane plot in the dark to eliminate her. I wonder if Jane will think Brenda is more evil than Marty was.

The weather is still bad. Are there any good months to be in Nicaragua? Fabio explains how they protected the fire with chests and enclosed the shelter. Holly is going to work her plan to get rid of Brenda. She sounds like she would be good at a bake sale. It's the next day, and Benry still hasn't figured out that Brenda and Sash flipped on them. Holly's logic is sound and Benry is eager to carry out someone else's plan again.

Jane and NaOnka provide an interesting insight in to their mystical world. Jane figures that Brenda must have been studying this game since the dawn of time and NaOnka calls her Marty Junior. Jane states that she doesn't like to associate with villains, and that's what Brenda is now. Not quite diabolical, but we're getting close. NaOnka's easily swayed by this opportunity to eliminate her bestie.

Holly talks to Chase about getting rid of Brenda, too, but since Chase is too in love to even hear that kind of talk about Brenda, he thinks getting rid of Benry is a good idea. That settles it; Chase is a meth head. He's probably got a whole stash of disassembled bicycles hidden in the forest somewhere. He's probably convinced Kelly Legs to give him money for the bus like three times.

Reward Challenge Time! Team Barrel Bridge Building That Is Not Quite On Like Donkey Kong Because That's A Trademarked Term By Nintendo. The reward is volcano boarding, and food, of course. Long story short; Chase leads to blue team, consisting of Fabio, Jane, Kelly Legs, and NaOnka, to victory. The yellow team fell down and Dan's hand was smashed; hard enough to whine to Jeff about, but not enough for a medic. I wish Kelly Leg were here to call him a pansy. The winners head off to their destination in a helicopter.

The helicopter lands at the top of a volcano crater and the Survivors walk to the staging area for volcano boarding. This recreational sport dates back centuries to a time when men felt they were not being adequately pelted in the face with tiny volcanic rocks. Before the invention of boards... and helicopters, tribal elders would hurl handfuls of rocks at their own faces and heave themselves down rocky hills to appease the volcano gods. Fabio wonders what's going on back at camp. Chase says he doesn't care.

Meanwhile, at camp: FIRE FIRE FIRE! You know those chests they used to protect the fire? They were made of wood. Wood is also made of the same material as firewood, the fuel they were using for the fire, so I can see how the fire would be confused. The losers return after most of it's burned out, but the shelter remains standing. Smokey the Bear is going to have someone's ass for this. One of the chests had their food in it. The fire was hot enough to melt some of their glass jars. Benry wants to cry.

Back in the volcano, the game is discussed over the meal. Before anyone says outright that they want to get rid of Brenda, NaOnka grabs Fabio and leads him a few feet away to explain the situation, away from Chase and Kelly Legs. Chase seizes this opportunity to mention that Kelly Legs never talks. She thinks it's funny. NaOnka convinces Fabio that getting rid of Brenda is a good idea, and the former enemies are again working together. Buddy comedy, here we come!

When the winners return to the camp, the first thing Chase does is run to his master, Brenda, and tell her about Holly's plan to get rid of her. He swears to us in his confessional that it's for no other reason than that he trusts her. He just trusts her. Stop asking about it, he just trusts her. Also, he wants to put his Game Plan in her. Pretty gross nickname for it, right? He swears he won't backstab her because then she would think he's an ass, which would be the worst thing in the world, since he's hopelessly in love with her. Brenda doesn't feel threatened by Holly's plans at all, and she's never going to let Chase put his Game Plan in her.

Chase talks to NaOnka and tells her he can't trust Benry or Holly. NaOnka sees how insane Chase has become and takes Benry aside to warn him, then she warns Jane. Jane can't imagine what type of spell Brenda's cast on Chase, and he's going to catch hell when he gets back to Carolina, "because Carolina people don't like that." Immunity Challenge Time! Rope-hanging Platform Stand; singles event. If Fabio pees, he should get runner-up immunity. Kelly Legs struggles before long, but Sash beats her into the water. Satisfied that she's not the weakest girl out there, Kelly Legs drops in, too. Brenda starts to struggle, which excites Holly so much that it's gross to think about, so she slips and falls in. Brenda hangs on for a few moments longer while Dan begins to struggle, but then she drops in, too, followed immediately by Dan. Fabio gives up, then NaOnka. Only Benry, Jane, and Chase remain for when they move to the next knot. Benry screams and turns bright red. He sees Chase sitting comfortably and knows he's beaten so he drops out. Jane thinks she wants to quit next, so Jeff tells her no. She closes her eyes, channeling some unknown demon, and trembles as its power courses through her veins. Chase becomes overwhelmed by the evil presence and falls into the water. Jane wins immunity.

Jane thinks Brenda should be voted off tonight. Chase confers with Sash and tells him he thinks Benry is the biggest threat. I hope Chase is getting the stupid slapped out of him as each of these episodes air. NaOnka talks to Sash about Chase and invents a new way to measure annoyance: the pisstivity scale. Chase reached the height of her pisstivity scale. Sash says Chase "drives him crazy" and we all know what that means: friendzone triangle is a go; Chase isn't getting any from Brenda, who isn't getting any from Sash, who isn't getting any from Chase. Add that up, and it's 180 degrees of lolz. Before we can enjoy this too much, NaOnka spills to Sash the true plan of getting rid of Brenda. Sash is shaken by the whole thing, he thinks the Brenda ship might be sinking.

Chase tries to sneak away with Fabio, but Holly runs after them, spoiling whatever plan Chase had. Holly says what she's doing again and Chase is stuck because he doesn't trust anyone that he's not in love with, so he runs to warn Brenda. Now that Brenda is faced with the reality of the majority turning against her, she's a little more worried. Chase, Brenda, and Sash all gather to talk about their options, well within sight of the others who are sitting at camp. They can all see Chase betraying them. Brenda's plan is to get the immunity idol from Chase and blindside NaOnka, since they used to be close.

Tribal Council Time! The jury is brought in and Jeff asks around before Brenda calls out NaOnka for trying to jump ship on their alliance. NaOnka denies it was her idea and Chase takes the opportunity to tell everyone that of course he ran to Brenda, he's a sucker. Jeff demands Kelly Legs make a contribution with her twenty years of experience in the field of carbon dioxide production. She doesn't have any idea what's going on. Good talk, Kelly. Brenda thinks it only makes sense that it would be NaOnka who's leaving the alliance. Brenda insists that she didn't scramble and Jeff seizes on the fact that she thinks she's too proud to do that. Alina comments that she finds Brenda so irritating. Brenda continues on saying that she only wants to talk to the people she trusts and the others don't matter. What a stubborn way to play. Sash finishes by observing that almost everyone's standing has changed since the last vote, so they may have had to change, too.

Voting time! Holly votes for Brenda and Brenda votes for NaOnka and draws some symbol (a key?). Jeff asks for any hidden idols. Chase, Sash, and Brenda exchange glances, but Sash does nothing. Jeff reads the first two votes, then one for Benry (Kelly Legs, lol), then the rest are for Brenda. Alina and Marty are stunned. Chase looks like a lost puppy. 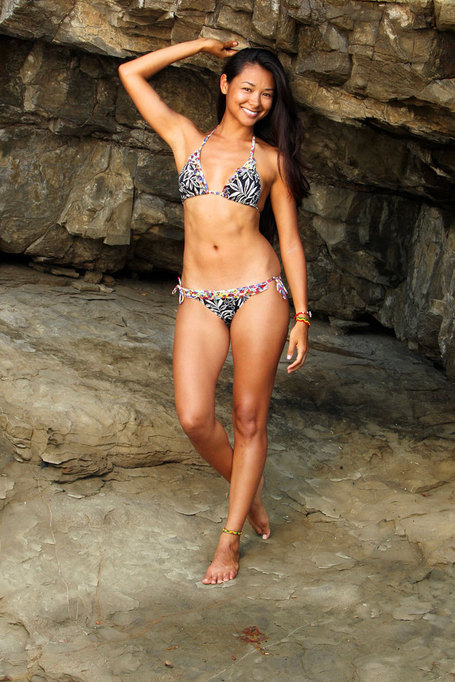 "I frew up" via www.cbs.com

Next time: People remember that it's awful having to live with NaOnka.