Last time on UNCOMMON SURVIVOR: Sash convinced Marty to give him his immunity idol and then decided to not immediately vote him out, proving once and for all that rooting for Sash is a zero sum game. He'll do something awesome, but instead of a celebration dance, you want to brace yourself for the impact of whatever his equalizing factor will be. Not that anyone was rooting for Sash.

Young people of the United States, you should have voted Tuesday. There aren't any physical challenges in our electoral system (yet) so I don't know how you guys are going to win any rewards. If you let all the old people get to the jury, there's no way you're winning the million dollars.

Birds are eating a dead crocodile while Marty tells us his days are numbered. Luckily for him, Fabio brings back tree mail that tells La Flor to pack up and head out. Marty's saved by the merge.

Espada's tree mail instructs them to prepare for visitors. Aline, who has no allies on the tribe and had been surviving merely on the luck of La Flor's losing, comes up with the only plan for how they're going to vote after the other tribe arrives, but since nobody likes her, the plan is ignored. She wanted to get rid of Marty, thinking that he was probably in control, which would have been funny to watch him realize his lifeline was actually a noose.

La Flor arrives carrying a large chest. It's a feast, some new red buffs, and instructions to pick a new tribe name. While everyone else enjoys the food and shares, NaOnka hides things in her clothes. Brenda and NaOnka go off alone to catch up. It's torturous listening to NaOnka explain anything. 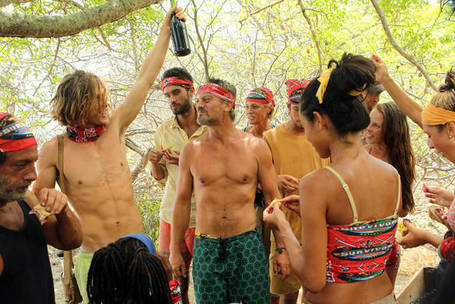 Apparently the new tribe name is Libertad. Marty picked it. Another season, another new name picked at the merge, and again, they let me down. You know what would have been a great name? Elephant flaps. Whisper that to someone the next time they're trying to take a drink.

Chase and Jan are gathering water together while the sound of a banjo is heard. That, combined with their twangy accents makes it hard for me to understand what they're saying.

NaOnka gets up early to make "tortillas" for herself but everyone else is eating them. To punish them for being stingy, she takes the tribe's entire jar of flour away to bury it somewhere. Since they made her mad, she's going to make them mad. Hard to believe someone married this child. Holly sees the whole thing but says nothing. When NaOnka is finished burying the flour, she goes back to steal more things. She's so confident in herself that she decides she's going to tell Alina "a little something something," is what my translator has given me. She tells Alina that everyone is against her, not saying who, and she can't come up with a reason why they would want her out. So then she shares all the stolen stuff with Alina to get her on her side. I can't make any sense of this. Seriously, what the hell!?

When it's time for another meal, the tribe starts to notice things are missing. Holly asks NaOnka if she put the flour back after she put it in her bag. NaOnka seems to think that if she repeats that she put it back enough, this will answer why she put the flour in her bag in the first place. When Fabio is about to find the words to ask her the question that could provide a direct answer, it's too late, she's already walking off. Alina feels guilty, but she should have just handed her over. Instead, Alina and Chase head after her and convince her to fess up, since everyone now knows she did it. Face with no other better option, NaOnka fesses up, but tells her Alina was there when she took all the stuff and that she was just trying to ration out the flour. Marty isn't falling for it. He says she lied and she stole, she should be out of the game. At least we have this to look forward to, she can never ever win this game.

The next morning, Brenda's asking Marty what's for breakfast. Why don't they ask NaOnka? Sash's crew decides that they're going to protect NaOnka because they have to and NaOnka's mentioning of Alina's part in the act has her in even more trouble. Sash sees the benefit of taking a guaranteed loser like NaOnka to the end.

Jane catches another fish and does a hokey celebration. Marty doesn't miss a beat and sees that this kind of Jane appreciation is good for her and bad for everyone else. He explains this all the Brenda, but she thinks he's wrong, mainly because she doesn't trust him.

Immunity Challenge time! The challenge is maintaining tension on a robot penis by holding two metal devices. There's a male and female immunity necklace for this round. Immediately, Kelly Legs and Dan drop out. Dan, you suck, you have bad knees, not bad arms. Alina drops out next, followed by Brenda. At this point I understand why immunity's being given to the winner of each gender. Jeff says this game's about concentration as the camera shows Fabio staring off into space. When everyone else looks around, they seem to lose their grip, but not him. Benry, Sash, and NaOnka all drop out, leaving only Holly and Jane left among the women and Fabio, Chase, and Marty for the men. Holly tries with all her might be can't keep the grip and Jane cruises to an easy victory. She's having such a good time, she keeps right on going. Marty finally drops out and Chase loses his grip when he tries to adjust. Fabio and Jane win reward. It figures Fabio would win the challenge that depends on ignoring your brain.

Jane's victory in the challenge was her challenging Marty's dominance. Since she won, she now has full mating rights with all of the tribe's females. Kelly Legs makes her first contribution to the game by suggesting the girls and Sash all vote out Marty, and not a moment too soon, it's only week eight.

Brenda, Jane, Chase, and Sash all talk about their plan. Jane lobbies hard to be rid of Marty but nobody else is in any hurry. Sash especially wants to avoid voting for Marty because of the promise he made when he was given the idol. It seems like the majority of the people that are left wouldn't think twice if he were to backstab Marty, after all, this is the tribe that is looking the other way to NaOnka stealing and fake apology. Jane doesn't like this at all and she's not going to vote for anyone but Marty until he's gone.

Dan tells Marty he should be on the lookout for a blindside because of what Chase told him earlier, that it was between he and Alina. Dan immediately runs to Sash to compare stories. Sash and Brenda tell Marty that Chase never mentioned that plan to them. Marty explains that voting for him doesn't make any sense and then his mouth starts moving a mile a minute as the paranoia overtakes him. Sash even thinks it's a bit much. Holly assures him with the South Dakota Word of Honor, which is not a real thing.

Alina, Jane, and Holly meet together and count how many they'll need to get rid of Marty. Alina decides they should bring in Fabio, so she goes off and finds him. Fabio wonders why they can't get rid of NaOnka. Fabio is now my hero. Alina tells him that would be fine since it wouldn't get her voted off, so he tells her that that's why people want her gone; she blows minds like rocket propelled cotton swabs. Fabio tells her it would put him in a bad spot and he's gotten close with Marty. She springs the trap: "Yeah, well, it seemed like we got along, too, but..." and she walks away. As usual, he isn't fast enough to think of a response, he's only left standing there feeling like the bad guy.

Tribal Council Time! Holly is asked one question but nobody cares about her. Marty is asked a question next and seizes the floor to try to wake everyone up to the fact that Jane is going to win it all if nobody does anything about it. He's 100% right, too, but nobody else is smart enough to look beyond themselves to realize it. He promises he'll vote for Jane if she makes it to the final three because she deserves it more than anyone else there. This higher level of thinking is lost on everyone else. Alina tries to help Marty bury himself some more by telling him that this is why people think he's a threat, he's watched Survivor before. Dan raises his hand to announce that Alina and NaOnka are thieves. NaOnka takes most of the blame, but says she gave everything back so there was no harm done. Fabio tells her she wouldn't have given anything back if she weren't caught. Then she claims her punishment for the crime was the fact that nobody wanted to talk to her. I hope her parents are ashamed. Jeff asks what Alina has done to get the target off her back after enjoying the stolen goods and she claims she should be spared because she's just a pawn and they should take out the powerhouse, which is not a legal chess piece.

Voting begins! Jane writes "Marti" - the girly way, with the i at the end. Snap. Alina votes for Marty, but the guy one this time. Benry writes down Alina's name, calls her a dirt squirrel of the highest order, and clears a piece of spinach from his teeth. Sash writes Alina's name, too, but his knowledge of dirt squirrels is severely lacking and his teeth are perfect, so we saw nothing else.

Jeff reads the votes we know and then the rest: the plan for everyone to vote for Alina stuck. She becomes the first member of the jury. 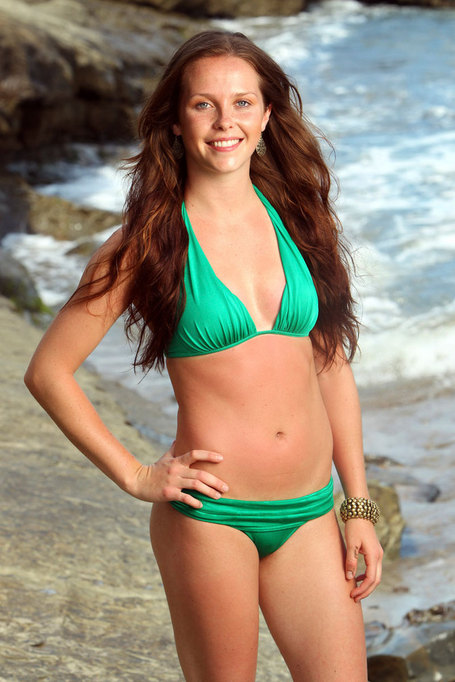 Next time: Sash and Brenda's alliance gets a little more serious and NaOnka is determined to show the Survivor audience everything she learned in finishing school.