Previously on UNCOMMON SURVIVOR; it's been what the Spanish call "El o el" - rain is making people cry, things have been accidentally set on fire. Last last time, Sash kept his idol pocketed while the group eliminated Brenda. Now the two-headed snake with writhing around in the sand with just one head like some freakish nightmare.

Speaking of freakish nightmares, Happy Hanukkah! That's right, you were so consumed by your Gregorian calendars that you forgot you're out of time to buy gifts for everyone. Your mother is going to be so disappointed in you. Hint: Gift cards haven't been working out for me lately. Send checks made out to CASH. I also accept Paypal.

Kelly Legs was blindsided by Brenda's blindside. It looks like she's finally aware that she's been transported to a remote location with nineteen other strangers pitted against each other in a fight for a million dollars. Holly praises NaOnka for turning on Brenda. Here is a quote on Brenda:

"She literally threw me under the bus and ran me over forwards and backwards."

If only, if only. They could never top that, either. If someone is ever literally run over by a bus at tribal council (I'll make exceptions for people not thrown under said bus) I will be done. There will be no greater moment and the show will be over. NaOnka also does that thing where she just says the opposite of what she is. If you tried to intimidate her, no, you can't, because she'll do it to you... with her words. Chase now appears to be the in the catbird seat; Holly, NaOnka, and Jane are all allied with him.

Whoever chose this camp site didn't know any thing about river deltas and built it right next to one, so every time it rains, half of Nicaragua's rain water goes out through this river that runs right next to their camp. The rain is making NaOnka feel like quitting again. Kelly legs is starting to lose cool, too. Fabio has the right idea. Just find your happy place. Then pee out of it.

All this wussing out has Benry ready to start voting people out. NaOnka decides that since she's weakening, it's time to give Chase her idol. He vows right away to never give it back. This is dangerous. Chase gains a bigger chance to win this thing, and if he does win it, that means he stands a better chance of releasing an album of his songs. If that happens, you guys, just literally throw me under a bus. Forwards and backwards.

Holly meets with Jane and names the members of their alliance, but it's not the same list Chase named. NaOnka is missing from Holly's list and Sash is included. Jane answers this with an, "oh hell yeah," and mentions bringing Kelly Legs in, too. Everyone is assuming NaOnka and Kelly Legs are just going to quit, though, so they can leave Fabio, Benry, and Dan in the minority. Sash nods and smiles along with all of this, but then tells us he really only trusts NaOnka and Kelly Legs. He says trust, but I think he means he wants them to stay because he knows he can easily beat them in the end.

Reward Challenge Time! Did somebody say cross promotion tie-in? That's right! The Incredible Crash Dummies Movie is coming out, so they'll have to drag one through an obstacle course. It's kind of like how being a tiny fireman would be, but this time, due to budget shortages, they haven't had any chili for a month. Fabio, Sash, Jane, and Kelly Legs make up the yellow team and Chase, Benry, Holly, and NaOnka make up the blue team. Dan went unchosen so he has to sit in the giant chair that makes him look like a weak baby. He chooses to back the blue team. The challenge begins; yellow has a small lead carrying their Gilligan after they untie it. As they carry the dummy over a wall, Kelly Legs gets hit in the face by its foot. As they drag the Gilbert through the rope obstacle, Jeff is nearly creaming himself at how close and hard fought this challenge is. They head through the final obstacle still fairly even, with Fabio and Benry taking point on their respective Gulzars. Benry's furious tugging gets his head out (lol). Jeff starts barking like an angry parent drill sergeant at the yellow team. As the dummy's waist gets out of the obstacle, NaOnka teabags herself with it. The strategy works and blue wins reward. Dan wins it with them.

Before they can head off, NaOnka announces that she's quitting. Jeff, surprised, asks if anyone else wants to quit. Kelly Legs speaks up that it's her last day, too. Jeff doesn't want this and tells them they have the afternoon to think it over. You see kids, if you quit, they can't make a clip show! Jeff says he has one more thing. He tells the winners that if just one of them gives up going to see Gulshan's Journey and eating a bunch of junk food that would probably make you vomit, they get to take back with them a new tarp and a pot full of enough rice to last them the rest of the time there. After some consideration by all the winners (I can only guess NaOnka actually considered it), Holly decides she's going to be the one to do it. Benry tries to tell NaOnka to do it instead while Holly's graciously giving away her prize, but NaOnka just sits there. Holly turns back around to see NaOnka just sitting there like a selfish brat. It's a good thing. The best part of it is that Jeff has to remind the blue team to smile because they won.

The losers take the new tarp back to camp and begin making repairs to the shelter. Holly takes Kelly Legs aside and gives her a pretty good second-hand Jimmy Johnson speech. Trivia: offering someone a "second-hand Jimmy Johnson" in exchange for compensation is against California Penal Code 647(b). Kelly Legs says she can't stay any more because she's cold. Holly points out the brand new tarp. Then Kelly Legs says she's not getting enough to eat. Holly reminds her that they've just gotten more rice. A t this point Kelly should just say, "See? I'm suffering from mental problems!" and run screaming down the beach. She feels a little more hopeful now, but she still doesn't think she's got anything left to suck.

The winners had a nice time except for the fact that NaOnka's there and nobody likes her. As for the movie, get this: Jack Black is chubby. I'm sure it'll be hilarious at the end when he decides that all humans are Yahoos and spends the rest of his days talking to horses.

Before heading out, the remaining Survivors at camp enjoy big bowls of hot rice. Fabio notes that this is better than what the others were probably eating. Kelly Legs is still up in the air on quitting.

Tribal Council Time! They skipped the Immunity Challenge! Way to go, quitters, you're messing up the show. Jeff explains to the jury why they're all there and asks Holly why she didn't end up quitting. Holly replays the time Jimmy Johnson gave her the pep talk and she came back and won the Big Game of Not Quitting. Jane talks about how she's kicking ass even though it's hard. Jeff asks NaOnka when she first thought about quitting. She whines about the rain, earning a look from Dan, who has the least enviable leg situation of any Survivor this season. Jaws drop on the jury.  She claims to be "literally" freezing.... in a tropical climate. She's proud to say that she's been there 28 days and that she's the only African-American still there (out of a possible two), and she comes from a background of strong black women (and no men). You know that feeling of embarrassment you get when someone is humiliating themselves so earnestly they don't even know it? I hope it ends now. It's not fair that she's embarrassing me with her stupidity. Kelly Legs thinks her body is going to break down. I hope she's not a med student. Benry is shaking his head at all of this. He hates quitters. Fabio says he's only a year older than Kelly Legs and he doesn't care if it's LITERALLY FREEZING (he said snowing, I know), he's going to stay. Jeff asks NaOnka about the challenge and if she thinks she really had a chance to win. Of course, she blindly swears with full confidence that she could. The jury is laughing at her. Jeff explains the rest of the offer that Holly sacrificed herself on. NaOnka doesn't understand how selfish she is. Jeff asks Jane what the young people need to learn. Jane basically says they don't know how tough the world is because they can run back to their parents.

Jeff makes NaOnka give her final decision: She quits. Everyone laugh at the worst person to ever be on this show. Good riddance. 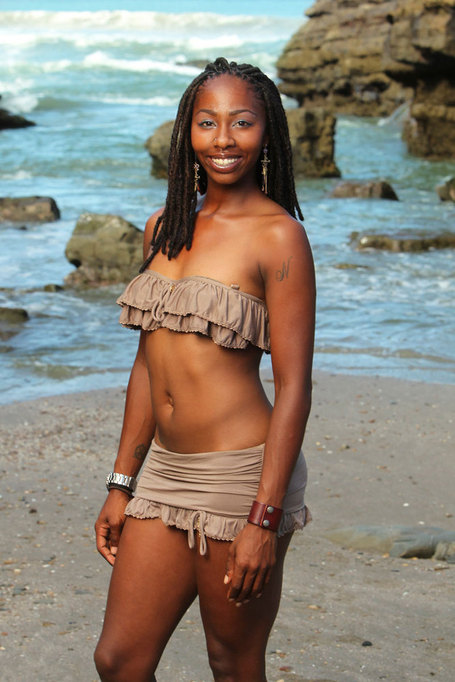 "I am stupid, hurr durr." via www.cbs.com

Jeff makes Kelly Legs answer. She quits, too. And nothing of value was lost. 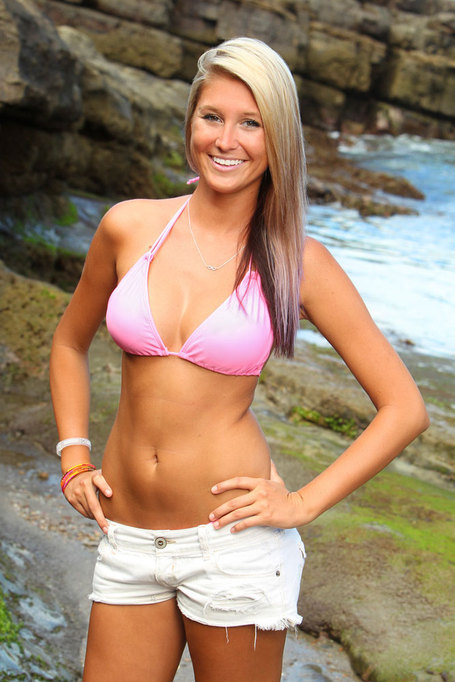 Jeff angrily extinguishes their torches and kicks them out. Marty is pissed. Brenda is devastated. Alina is crying.

Next time: The game begins.