Last time on UNCOMMON SURVIVOR; it was probably the most disappointing and unsatisfying end to an episode there ever was. Forget all the times your favorite player lost or your most hated player won. Having two people quit and then be allowed to continue on the jury was weaker than Michael Cera's arms. Jeff was obviously angry with NaOnka and Kelly Legs' decision, but he didn't vent enough visible anger to satisfy me. He should have flung their extinguished torches at them and chased them away from the council area. Then he should have made them watch Gulliver's Travels again, eyelid holders and all. The intro was Sash's sob story and I don't sympathize with that at all, but Jeff referred to a Sash train and that was funny.

I'd like to put this space up for rent, but I think everybody would know that it's only a slightly more effective form of advertising than launching a billboard into deep space. Oddly enough, only slightly more expensive, too.

Right after the vote, Holly explains how dumb the quitter's decision was. Someone decides to name the chicken, "Kelly-Nay," after the quitters. This is immediately accepted and is planned to be mentioned for the jury to hear at the next tribal council. And Sash is on the outs. Waaah.

Sash opens the next morning with some aggressive social play. He plans to give up the immunity idol in exchange for getting in to one of the groups of four. He and Chase spend a lot of time gazing longingly into each other's eyes. Chase promises to take him on the challenge reward next, but after Holly since she gave up her spot to get rice for the others and everyone agrees she's owed at least one.

Challenge Time! Old Challenge Redux! Qualify to move through the rounds, emerge victorious, and spend a night in a bed. You might even be able to squeeze one off in the shower, too. Fabio would.

Chase, Jane, Benry, and Holly all advance. From there, Chase and Benry make short work of the next leg to advance to the final round. Chase continues to make the challenge look like child's play as he wins in convincing fashion. Chase chooses Holly and Jane to accompany him (forget squeezing one off, right?). This upsets Sash because they'd just joined hands and exchanged vows earlier. Waaah.

It's clear that the starvation is getting to Sash because he says that Chase not taking him on the reward was, "one of the dumbest moves in the game thus far." He seems to have forgotten such instances as... the day before. Sash tries to find out what the other dudes are up to, but they haven't thought that far ahead yet. This especially confuses Dan because it appears to be the first time he's thought about what might happen at the end of the game. For now, he's barely grasping the concept of four being greater than three.

At the resort, the three ladies enjoy some drinks before showering. Holly gets topless. Not bad, not bad. She also thinks bringing Jane instead of Sash was a big mistake. Chase knows he screwed up now, too. Waaah.

Back at camp, the dudes are preparing Kelly-Nay for a meal. Someone mentions that Jan's going to be upset because it was "her" chicken, but this is quickly scoffed at and the preparation continues.

Jane returns and begins to cry. "Her" chicken was eaten. "They didn't have to eat her," she repeats a few times because giving it a proper Christian burial. She regrets having "won" the reward challenge and leaving it behind because she wanted to take it with her into the woods where things that are undoubtedly illegal in the United States would take place. Waaah.

Holly declares she doesn't trust Sash because he was there with the dudes the whole time. Chase kicks himself again for leaving him back here with all the guy waiting to pounce on him (lol) to turn his allegiance. Chase explains to the ladies that the plan is to make Sash think they're dropping Jane at the final three.

When everyone's reunited, Sash hugs Holly and Jane like they're old chums. This scares Benry into begging Chase for mercy like whipped dog.

Sash and Chase later meet up in the forest to sort out their relationship. Sash is diplomatic about not being taken on the reward and Chase makes it sound like it was his gesture demonstrating his trust in Sash. They make peace about it and Sash begs Chase to swear on a dead person that he'll take him to the final three. Holly comes over and there's some light chatter about getting rid of Benry or Fabio before Benry notices their pow-wow and panics, telling Dan and Fabio that their plan is doomed. Benry thinks he can usurp Sash's position as a swing vote because he's pals with Holly and Chase, "has been his boy since day one." Benry confidently strolls up to the trio and Holly blurts out that they were talking about getting rid of Fabio. Chase goes silent as Benry begins to beg for his life again. He's quick to sell out Fabio to save himself. Benry asks Sash if he would have voted for Fabio, and Sash tells him he would have to sooner or later. Benry then mentions that none of them want to be in the final three with Jane, so it has to be either Fabio or Jane to go this round. We'll see.... we'll see.

Immunity Challenge Time! Unwind yourself from a beam then run to grab a bag of puzzle pieces to move on; assemble in the next round and win. Jeff asks if it's worth playing for. I'd yell, "NO!" just to give him another quitter scare. Fabio breezes around his beam and wins by a wide margin. Sash and Benry have to go back after trying to leave too early, but they advance anyway because everyone else turned in a pretty poor performance.

Sash, Fabio, and Benry begin assembling their puzzles in the next round. As Jeff calls their name and announces their progress one-by-one, Jane cheers for the name that was just being spoken about. By the third time this happens, Fabio mumbles, "Shut up," under his breath and shoots an annoyed look over to Benry. Benry just smashes his pieces together in frustration and gives up. Fabio starts to copy Sash's puzzle, but he's not fast enough to catch up; Sash wins immunity.

Sash is really stoked on his new lease on life in the game but Fabio is now worried about his own standing. He asks Sash to tell him if his name comes up and Sash says he will. Fabio tries to remain in the "Be cool" mode, but he ends with, "We'll see, man, we'll see." I think I like this kid.

Sash and Chase's plan is to tell the three other duders a variety of different plans to keep them confused. They decide to tell Fabio they'll be voting for Jane, but Benry butts in, thinking that he won't buy that and insists they tell him it's Holly instead. Yeah, huge difference there, Dumbry. The tale is told to Fabio and he buys it. Poor kid even talks himself into thinking Holly is the right answer.

Sash and Jane share a buddy moment. He calls her his second mom and they gush over each other. Sash gets a little more involved into the love talk... did somebody find a hidden stash of Extasy or what?

Tribal Council Time! Jeff brings on the jury and announces the quittiest quitters that ever quit. Stop smiling, NaOnka, nobody is happy to see you. After listening to Jeff interrogation, I can't think of a single question or answer that's worth recapping.

Jeff reads the votes: Holly is first. She smiles. Fabio gets one and panic grips him as he looks toward Sash. The next vote is read: Fabio. The realization comes that he's going home now. Tears sting his eyes. He begins to collect his memories of his time here as the final votes are read and he is sent home. Marty blurts out to the other members of the jury, "What the hell?" Another vote: Ben. Benry looks puzzled. Fabio puts his face in his hands. Another vote: Benry. The panic has set upon Benry now. He looks around and quickly tries to count how many votes are left. Another vote: Benry. Fabio becomes calm... content, even. He strokes his young man's beard and nods. the final vote: Benry. Marty and Brenda are shaking their heads, I'm guessing because Jane is still in the game. Benry walks into the night muttering to himself, "Unbelievable." Waaah. 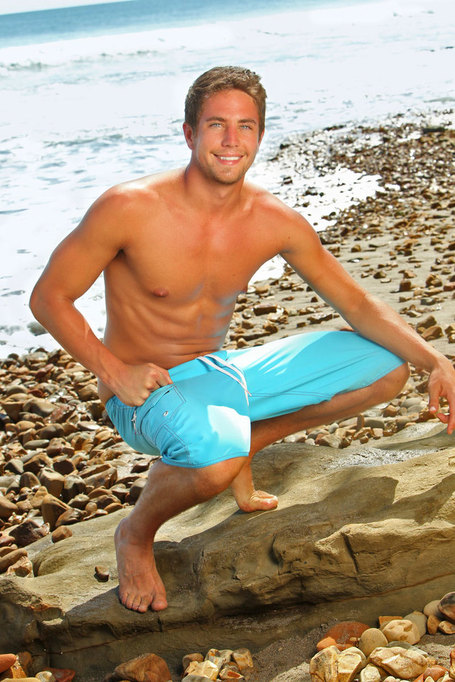 I just realized Henry is supposed to be his last name. via www.cbs.com

Next week, with only two episodes left and this shaping up the be the worst Survivor season in recent memory, CBS decides to just start executing motherbitchers.