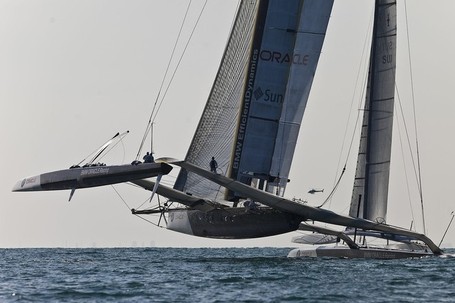 After three attempts Alinghi and BMW Oracle finally raced two days ago.  The American's crushed the Swiss by the third largest time difference in Cup history.  So I'm thinking it's a pretty safe bet that the America's Cup is headed back to the United States after the second race in a best of three series.  The Cup hasn't been on American soil since Dennis Conner lost to the Kiwis off San Diego in 1995.

BMW Oracle did the majority of training and water testing off San Diego dating back to 2008.  Even though the USA team is racing for the Golden Gate Yacht Club in San Francisco, there has been plenty of speculation from even Ellison himself that San Diego would again play a big part in the next America's Cup regatta.  So there's no better time for a US team to win.

Watch History in the making tonight/Sunday early morning at 3am Pacific on ESPN360.com