Previously on UNCOMMON SURVIVOR; The heroes self-righteously marched onto the scene high and mighty like the sandwiches which bear their name, and the villains came in all villainous, unlike the mustachioed caricatures I expected them to be. Sugar walked the path of the exile, and jbox's love/hate relationship with Boston Rob began a new chapter.

Last night you either watched this or the Olympics. This can only mean one thing: at long last, Uncommon Sports dominate the primetime television market. There is nothing to report on the Olympic front except that our curling team is still without a single win and I discovered that Vernon Davis is a horrible curling skip because he doesn't even show up to matches until today.

Night 3 at Villaintown has jbox's fave complaining about not having a shelter in the rain and he's getting sick. Everyone's just glaring at him. It's starting to look like someone doesn't poison him, though.

Morning 4, still at Villaintown, Coach and Jerri, the old couple, stare out at the sunrise. The Lair has undergone several redesigns, according to Wedding Videographer and All Around Ray of Sunshine Randy. This is the Lair Mark IV. Jbox's fave is the foreman on this project, and his wife-beater tan is distractingly gross. Courtney makes her hopes that he doesn't die known in a confessional, signifying his certain doom. A lot more gums are flapped than shelter is built.

Morning 4 at Herotown, triumphant music is played while the Heroes' logging operation is shown. Rupert is threatened because Stephenie is cute, so now he's hovering all over her, so much that she notices. Rupert's kind of a dick.

Over at Isengard, jbox's fave is tired and needs some wattah. He walks away and decides he's done doing things and sits down with a nice coconut. The popular girls meet on the beach and complain about how the boys there are totes failboats. Like, Randy? OMG. Jbox's fave is still somehow storming off (I thought he just did that). Coach sees this and tells his wife Jerri that everyone's having a meltdown. Well, not everybody: he's not. Classic Coach.

Some unknown time later, Jerri finds jbox's fave lying on the ground with his hat covering part of his face. She approaches him with her machete raised, and for a moment, looks like she's going to make jbox's dreams come true, but then she lowers it and tries to wake him up. He's not responding, and when he finally does, it sounds like he's been crying.

Jerri said she saw the whole thing and now she's afraid the tribe is going to get caught in a negativity spiral and I think I'm on Htrea. The medical team checks him out and he is definitely crying. He couldn't even hold water up to his mouth. Somehow his tears convince Jeff to leave him in the game. The doctors say he just has the flu. You mean he just laid down for awhile and cried and they brought him water? What a joke. Everyone's relieved to have him back, even Evil Russell.

Immunity & Reward Challenge Time! It's the box-rolling staircase thing! Jeff makes it known that J.T., Coach, and Tyson all did this challenge in their season together. The Villains sit out Randy and Courtney, the Heroes sit out Rupert and take a moment to come up with a plan that sounds like "J.T. is in charge, one voice." J.T. runs out and starts rolling the first box back, with Cirie catching up for moral support. Jbox's fave and Danielle run into problems. Candice and Tom increase the lead with their leg and Colby and Stephenie head out. The Villains fall behind a full course length and Russell, in his hurry to get his box back, knocks Parvati in the face with it. James and Tom head out to bring back the Heroes' final box, they could each probably haul it on their backs, while jbox's fave and Tyson slowly head back. Tyson exclaims, "Roll it over Rupert's toe!" Unsuccessful troll. But the Heroes' lead all but disappears as the puzzle assembly begins and multiple voices are giving direction. The Villains move efficiently to get a lead and begin pushing their first top piece up. The Heroes hit another wall while yelling at each other, Rupert tells them they have to move. When too many Heroes are trying to direct the work and James screams, "shut up" to everyone. The Villains take this time to move their last piece into place and Evil wins the day. James continues to yell at everyone, mainly directing it towards Stephenie. One voice, that was the plan. Stephenie didn't like being talked to that way, and James is pretty sure that she's the kryptonite on the tribe. Damn it, James, I already used a Superman reference.

Back at Camp Hero, J.T. volunteers himself for the ax. A smart move, as everyone rushes to defend him. Rupert credit's jbox's fave's keen ability to do puzzles and yell. James cuts in and starts yelling, he asked for one damn voice and he doesn't like defensive people. They should have shut the ducks up and listen to the guy who did the challenge, as he points to J.T. He finishes his angry tirade and storms off, with everyone looking down or away from him as he exits the hut. Tom tells us in a confessional that he thinks James is a loser.

Over at Villaintown, everyone's excited about the win as they put a tarp on the Hall of Doom Mark IV and they're crediting jbox's fave with the MVP award. He even brings back a giant clam for a victory feast, but Evil Russell, not to be outdone, runs out into the jungle after a chicken with nothing but a spear and kills it. He returns to camp, beaming. The man is a one-upsmanship artiste.

Over at Camp Hero, James is openly lobbying to get rid of Stephenie because of the time she was the last person left on her tribe. J.T. appears to be the only flexible piece in this scenario, and Colby, Tom, and Stephenie hide out in the shelter, trying to spy the information line. Tom's plan is to convince Cirie and Candice that they're in trouble.

Day 6 at Camp Hero has Stephenie working on Cirie. Stephenie can promise Cirie that if she's voted out, Cirie will be next. Such a clever way to word it. Tom leads Candice to a secluded place in the jungle and begins his technique. The plan is to write Amanda's name down. Candice and Cirie meet back up to compare notes and realize they have a little bit of power here.

Voting Time! Jeff calls them all losers and J.T. apologizes for the loss again. Jeff tells James he was as frustrated as he's seen him, and that sets him off on a rant that lasts a full sixty seconds, with a couple short defenses from Stephenie, before Colby interrupts to defend her, saying she shouldn't be singled out. So James includes Colby, too. Tom interrupts with an admirable white-knight and one-upsmanship interjection and accuses James of bullying. Jeff asks Colby if it's alarming that on day six, they're already dividing and he says it was surprising how fast it happened. Jeff gets Stephenie to reluctantly admit that Tom cut her throat in the end, but Cirie seemed eager to let everyone know that Amanda cost her a million bucks. Voting begins after Amanda said she's scared or something.

Stephenie and Amanda write each other's names and Jeff goes to tally the votes. Jeff reads the first two votes, the third is for Steph, the fourth is for Amanda, the fifth goes to Steph, sixth to Amanda. Steph gets a fourth vote and then the fifth and she's eliminated. Stephenie's parting advice is that less, "cursing off" the tribe might help. James tells her to keep her mouth shut. He's a pretty terrible Hero. 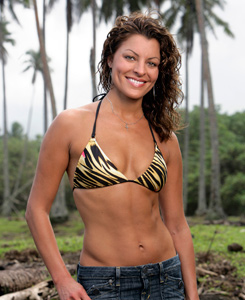