Do you live in New York City and woke up this morning wanting to run a race? Are you so pumped about the Groundhog Day news that you must ascend stairs? Do you have an insatiable desire to wrestle with sweaty strangers in a stairwell? Well, grab your favorite blonde dame and haul ape tail over to the Empire State Building, it's the 33rd Annual ESB Run-up!

Not so fast, Gin Miller, registration is closed. You will have to wait until next year to join the 315 runners from 19 states and 17 countries to run up the 86 stories and 1,576 steps to the Observation Deck. You'll also need to be selected, as the race organizers, "reserve the right to accept or reject entries as necessary to accommodate the narrowness of the stairwell." 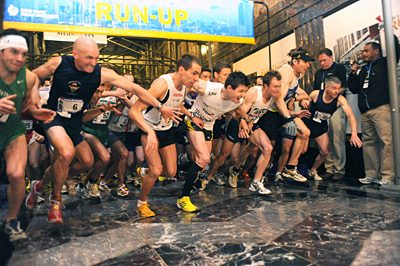 via www.esbnyc.com, "The Official Internet Site of the Empire State Building"

The race climbs 1,050 feet into the sky, with the fastest ascension ever in 2003 by Australian Paul Crake in 9:33. Compare that to the inaugural time of 12:33 by Gary Muhrcke, and you see concrete proof that we humans will be able to climb the Empire State Building in less than a minute in just 99 more years. Or we could just take the elevator.