Sven Kramer: Are You Stupid?

Share All sharing options for: Sven Kramer: Are You Stupid?

Remember the guy who asked the NBC reporter if she was stupid, as if people outside the Netherlands actually paid attention to speed skating? Sven Kramer, the Dutch speed skater who thinks he's the kattekop's ondergoed, was disqualified for making an illegal lane change during his 10,000m run. He would have set an Olympic record, but he stupidly listened to his coach, who told him he was in the wrong lane. Then, he actually believed his coach and made a last-second change, skating on the inside track that he had just come from, when he was supposed to go to the outside track. 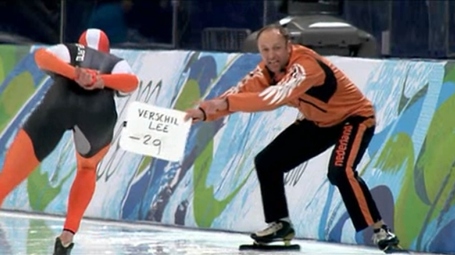 Sven was disqualified after he finished the race, he didn't even know he'd done wrong and had finished the race in the wrong lane, and when he found out, he cried, his coach cried, and I laughed because this cocky punk deserved it. His coach made a face that can and should be placed in reply to every comment you see on the Internet that makes you feel like your brain is being poisoned by its content. 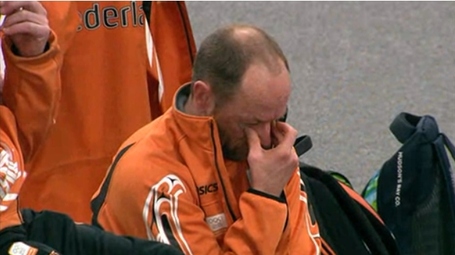 Michael Richards has got to be ecstatic about this, as people might now remember Kramer for something other than shouting racial slurs on stage.