Running in the 2010 Krispy Kreme Challenge

Share All sharing options for: Running in the 2010 Krispy Kreme Challenge 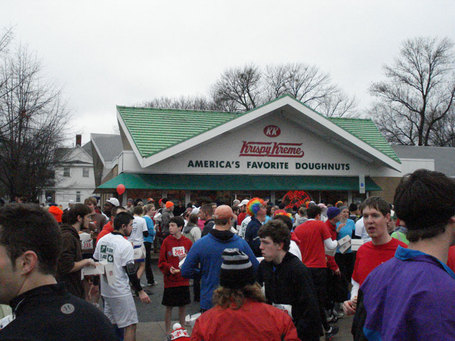 You can kind of see the guy in the middle, how he's ready to hurl at any second.

Anyway, 'twas that time of the year again, and I found myself in Raleigh, North Carolina for the 6th Annual (second time for me) running of the Krispy Kreme Challenge, an event held every year in North Carolina for people to torment their bodies,  as well as to raise money for North Carolina Childrens' Hospital. 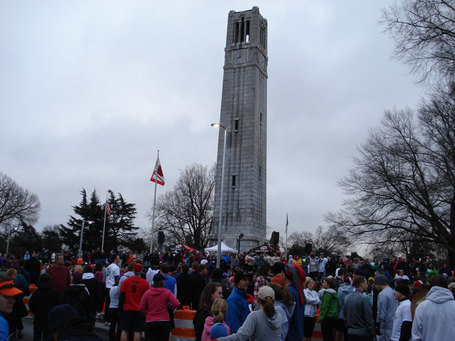 It was a cold and blustery morning in Raleigh on Saturday, and since it's my natural assumption that a vast majority of the Uncommon readership is all located in Southern California, I have the obligation to make the obligatory weather jokes - here on the east coast, around this time of year, we occasionally get this frozen precipitation, or wet stuff that falls from the sky, called snow.  There was more or less a massive blizzard that has plagued most of the eastern seaboard this past weekend, but fortunately for me, my home in Atlanta was safe, and at least, the Raleigh part of North Carolina was spared the heaps of snow, but it didn't change the fact that it was still freezing, and flurries pelted us anyway.

Regardless, the scene at NC State was festive and optimistic, and despite the fact that I was feeling ancient surrounded by 18-22 year olds mostly, I felt right at home.  After all, I'm the guy wearing a HULKAMANIA t-shirt and a replica World Heavyweight title belt. 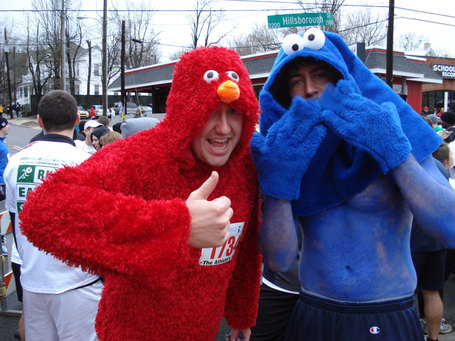 Costumes have become somewhat of a big deal when it comes to running in the Krispy Kreme Challenge, and unfortunately, at least for the dudes, the decision to show up sans a lot of skin-covering clothing has become this great idea for many of the male species that participate in this.  Shown above are Elmo and Cookie Monster, preparing for the event. 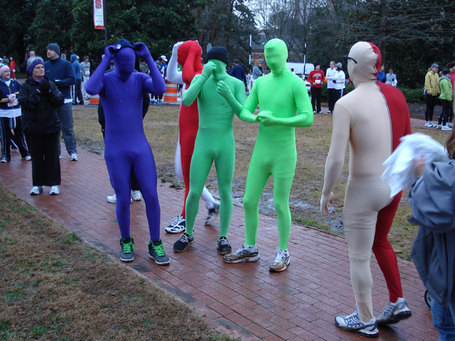 And as is the state of the world as it is now, no public event is safe from at least one person wearing the full-body anonymous zentai suits these days.  But it didn't help that they had to unmask when it came to the part of actually eating donuts, because those things don't come without mouths. 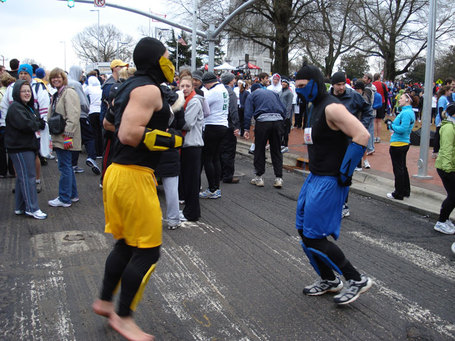 But I think my favorites of the entire event were Scorpion and Sub-Zero from Mortal Kombat showing up to take on the challenge.  I can't think of what would be a more daunting task - the Krispy Kreme Challenge, or the protection of my particular realm of residence from the soul-sucking agenda of the evil sorcerer, Shang Tsung, but I guess these guys were able to figure it out. 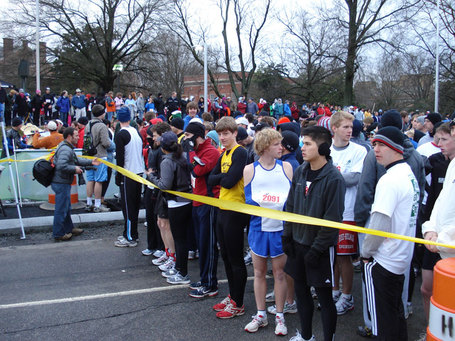 The starting line - the event was supposed to start at approximately 8:30 am EST sharp, but apparently, the ribbon was cut a little early, and the runners took off.  No matter, this event was supported by the supposed accuracy of precision chip timing, which allowed runners to accurately time themselves from the time they passed the starting point to when they finished. 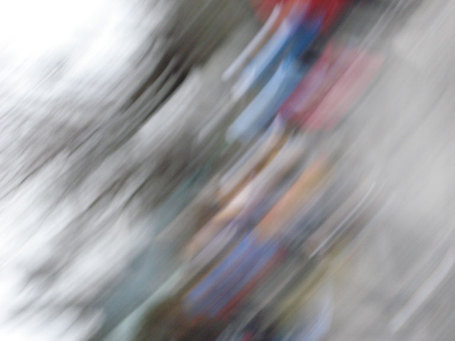 As for the run itself, I would share some images, but this is the kind of crap that I could manage while running in 31 degree Fahrenheit weather.  This is supposed to be what I look like. 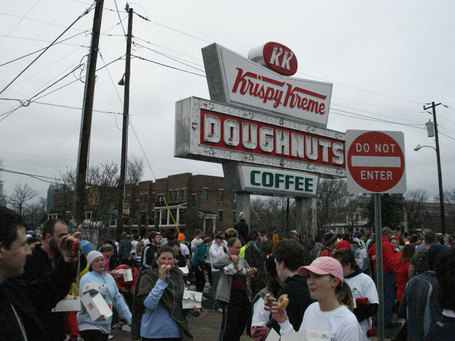 I arrived at the Krispy Kreme at what I felt was a good pace, and the eating commenced.  I would've taken more pictures, if I weren't busy stuffing my face, and I didn't want my glaze-caked fingers to funk up my camera. 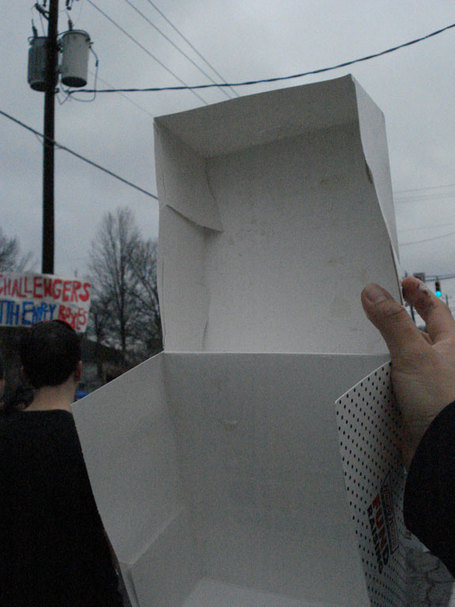 The aftermath of the carnage - I felt that I downed my dozen a lot faster than I had done last year, and with my mouth full, I lobbed my empty box into the pile of empties in front of the judges and took off as best as a person bloated by twelve donuts possibly could take off. 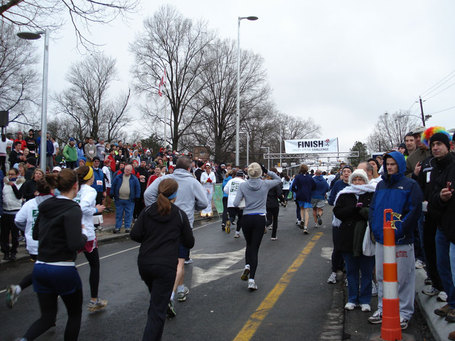 Naturally, the return leg is a lot harder than the starting leg, for one, we're not full of donuts, but secondly, the course as a whole is very hilly, and the entire return trip is almost completely uphill.  Not exactly what someone stuffed full of donuts wants to endure.

I crossed the finish line, and despite the fact that I felt that I had done better than I did in 2009 (55:27), I found out that my finishing time in 2010 was a mere 14 seconds slower, at 55:41.  Much like stat geeks try to project the drop off from baseball players as they get older, I'll chalk up these 14 seconds to being one year older, and put an asterisk there saying inclimate weather, like how Top Gear puts the star next to Stig test drives in the rain. 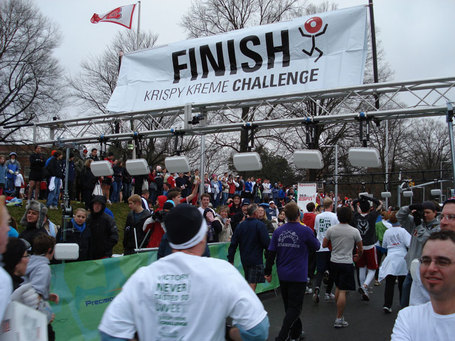 Regardless, I am filled with a sense of accomplishment at knowing that I can push myself to two different limits, and successfully run AND eat with the best.  But in this kind of event, contrary to what people believe in people who hurf up their donuts, and/or don't accomplish the race in under 60 minutes, there really are no losers - the event as a whole upped their accomplishments from last year, and with almost 800+ more runners than there was last year, raised over $40,000 for North Carolina Childrens' Hospitals, and in the end, that's what makes all participants winners.