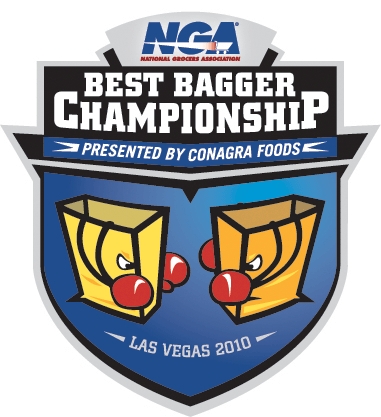 Heavy stuff on the bottom, light on top, separate your meats and chemicals, and keep your frozen stuff together, it's the 2010 National Best Bagger Championships! Where, "It's not just about bragging rights, it's about 'bagging rights.'" The National Grocers Association is having their annual convention starting today, with George W. Bush as the keynote speaker, to pal around, swap trade secrets, sample new products, and have workshops that explain things like self-checkout kiosks, digital coupons, or how to quell a union before it forms.

First of all, forget what you know about National Best Bagging Championships in years past. Have you forgotten? Good, because the game has completely changed here, people, and this is the game changer; no more plastic or paper bags! Can you believe that? Mind blown, right? Yes, the NGA has moved to regulation reusable grocery bags!

Secondly, the stakes have risen this year due to sponsorship from Con Agra Foods. Contestants will be competing for a $10,000 grand prize, $5,000 for second place, and $1,000 for third through fifth. For that kind of money, who wouldn't take a trip to Vegas to dance for your corporate overlords? This blogger certainly would, and I am awful at bagging groceries. I didn't know you could be bad at bagging groceries, but I ably manage.

Baggers will be judged on speed, bag-building technique, weight distribution between bags, style, attitude and appearance, so if you're the kind of guy/girl who plays by your own rules or you're not aesthetically pleasing in the facial area, that's going to cost you points. Jars, cans, boxes, and loaves of bread will join forces to try to confound the contestants, but they don't specify if there will be produce or frozen items. Maybe they'll save that for a tie-breaking round.

The competition will take place on Thursday. I'm rooting for the Californian from Nugget Markets, of which I've never heard, by the name of Kyle Casera, even though Sara Sandstrom from Whole Foods in Nevada sounds like my kind of girl. Go Kyle and maybe Sara!

Full press release is here and after the jump.

It's not just about bragging rights, it's about "bagging rights". The nation's top grocery store baggers are heading to Las Vegas Feb. 11 to compete in the 2010 National Grocers Association (N.G.A.) Best Bagger Championship presented by ConAgra Foods. The competition will be held as part of the N.G.A.'s annual conference, which features a keynote speech by former President George W. Bush.

Competitors will be rated on speed, bag-building technique, weight distribution between bags, style, attitude and appearance. A combination of jars, cans, boxes and loaves of bread will pose the challenge for each contestant as he or she races against the clock to bag the items the best way possible. For the first time at the contest, eco-friendly, reusable bags will be used.

With the involvement of ConAgra Foods this year, the prize pool has increased versus previous years. The grand prize winner will receive $10,000, the second place contestant will earn $5,000 and the third through fifth place winners will net $1,000 each. "These competitors are hard-working, young professionals from community based retailers in each state," said Frank DiPasquale, executive vice president of N.G.A. "They are great examples of how many grocery stores are committed to customer service and this competition is a fun way to recognize and reward these baggers for their accomplishments."

Twenty three states are sending their top performers to vie for the title of the nation's best bagger.The 2010 N.G.A. Best Bagger Championship presented by ConAgra Foods competitors are:

N.G.A. is the national trade association representing the retail and wholesale grocers that comprise the independent sector of the food distribution industry. An independent retailer is a privately owned or controlled food retail company operating a variety of formats. Most independent operators are serviced by wholesale distributors, while others may be partially or fully self-distributing. Some are publicly traded but with controlling shares held by the family and others are employee owned. Independents are the true "entrepreneurs" of the grocery industry and dedicated to their customers, associates, and communities. N.G.A. members include retail and wholesale grocers, state grocers associations, as well as manufacturers and service suppliers. For more information about N.G.A. and the independent sector of the industry, see the N.G.A. website: www.NationalGrocers.org.