Previously on... UNCOMMON SURVIVOR; The Heroes doled out a beating to the Villains to win their first Immunity Challenge. James completed his transformation into an angry beast with Rupert not far behind. Parvati became the girl everyone loves to hate and Randy was sent home before Pooh and friends could find his tail and nail it back on.

When the Villains return to camp following their dismissal of Randy, Sandra's comments about Coach have the Dragon Slayer fighting back tears. He shares his heart while Tyson holds him in his arms, nodding, telling him it's okay. Coach breaks down and Tyson stares into his eyes, and before long, embraces him again. He tells Coach that he can coach him on what to do. This interests the Dragon Slayer. Tyson dons his white suit of armor and explains that Coach should no longer tell his stories, that people don't believe him and they mock him. This depresses Coach further and he threatens to leave that night. "I'm done," he says. 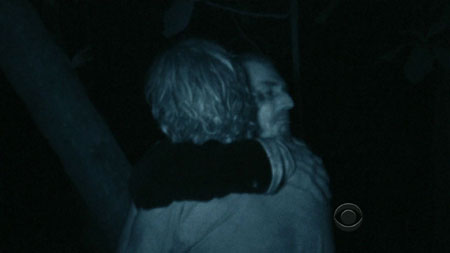 The next morning, he explains to a concerned crowd of none that he will be taking a walk. Tyson tells everyone that Coach cried on his shoulder last night. When reached for comment, jbox's fave (Boston Rob) had this to say: "Coach hadda sob session wit' Tyson... I dunno, dat's nawt muchuva coach ify'ask me." He goes after Coach to give him a pep talk. Coach tells jbox's fave that now that they're in middle school, they never hang out as much anymore. Jbox's fave is too much of a Bro to be having too much of this, giving Coach a big Bro hug and a Bro fist, telling him it'll be okay, that he has to trust him, and to pick his head up and act like a man. Then we are treated to Coach's version of Daily Affirmations and shown scenes of him showing off his tribal armband tattoos he got when he spent time with the Barbed Wire tribe of Papua New Guinea. Tyson, do you see what you almost ruined? 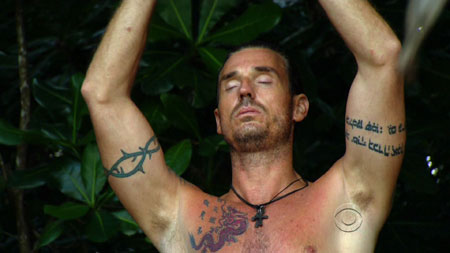 Morning 9 greets the Heroes of Herotown, and they've got tree mail, and oh-em-gee, ladies, it's a Sears catalog! The Reward Challenge is littered with enough Sears merchandise to bring Bob Vila to his knees. The challenge is head-to-head slippery basketball. Jeff calls the catalog, "circular," which I find strange, but I was never good in geometry. Jeff then shows off the array of products available, telling us that the Heroes picked fishing gear and cooking supplies, while the Villains selected a tool kit and tarp with rope. Parvati sits out, and did I mention that this challenge is sponsored by Sears, where you can spend your life well. 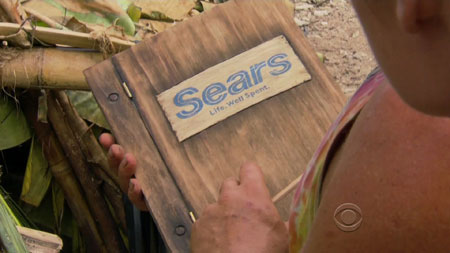 Coach and Tom face off in the first round. Is everyone oiled up? Both men slide out to grab the number 14 ball. Tom, whose chest is smoother than Coach's, slides directly to the ball, while Coach has to scramble to get there. They get to their baskets and both shoot twice, with Coach scoring the first point. Next, Russell and Cirie go. Well, Russell goes, sliding all the way to the ball and getting up to walk gingerly over to his basket while Cirie crawls on her hands and knees to her ball after sliding nowhere. Russell scores on his second attempt before Cirie even has a chance. Next, a coat rack versus a flag pole. No, wait, that's Courtney and Candice. They slide out to their ball, but Candice's speed gets her there first. She gets caught in the ropes like a sick dolphin, flinging the ropes around to escape. This confuses Courtney, who shrugs her shoulders while Candice scores the Heroes' first goal. 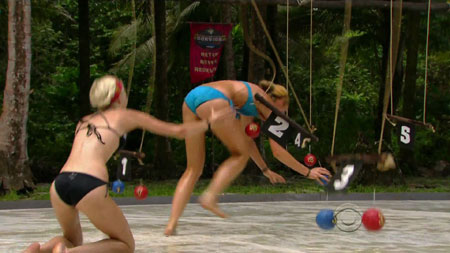 Next up is Amanda and Jerri; Amanda gets her ball and to her basket before Jerri, but the bitter old cougar remains calm and collected, scoring on her first shot, then erupting into an Elaine Benes victory dance. Up next is Sandra versus James. This round goes much like Russell vs. Cirie, with Sandra crawling feebly while James makes easy work of the course. Danielle and Rupert go next, and Danielle is definitely oiled up. 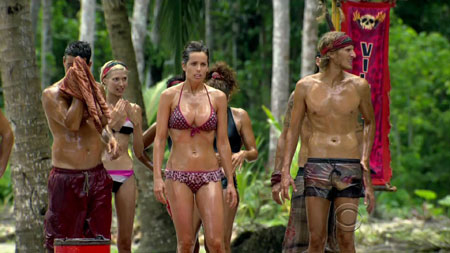 They both fumble the ball everywhere before Rupert scores, tying the game up for the final round. Last, it's Tyson vs. Colby. Colby gets his ball first and takes his first shot, bouncing it off the rim. Tyson, not far behind, bounces his shot off the rim as well. 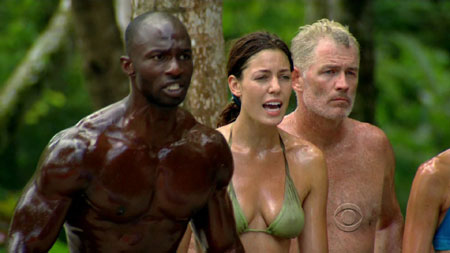 Both exchange misses until Tyson finally sinks a shot, securing victory and valuable merchandise for the Villains.

The Villains return to camp with their bounty, while Coach informs us of his change of heart, now that his team's won a challenge. While discovering their new toys, Russell drops a clue in the form of a rolled up piece of parchment from a knife sheath he's holding. Jbox's fave picks it up and reads it to everyone. It has detailed directions on how to find the idol. They openly discuss stupid ideas about what to do with the idol while Russell salivates about his Precioussss in the background. Jbox's fave tells Coach they should start building a shelter and Russell can't just leave the idol sitting there. In a moment of conspicuous stupidness, Russell announces that he's going for a walk. This alerts everyone, and jbox's fave tells Sandra to go see what he's doing. She sneaks down after him, and he steps out to see if they are looking for him, which lets her see him. She runs back to report, and jbox's fave orders that he be gone. Coach seemed to have no idea what the implications of an Immunity Idol were. 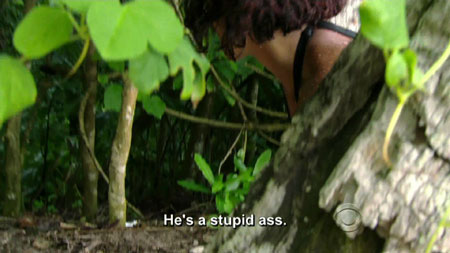 Morning 10 in Herotown starts with a cup of coffee, and another clue hidden in their coffee beans. The clue also has detailed directions to a hidden idol on their camp. After J.T. reads it, everyone stands around stunned. Before too long, J.T. is off one way while James saunters off in the opposite direction. Maybe the directions weren't so detailed. Tom and Amanda start off after James, arriving at where Tom thinks is the right location. He starts to dig with Amanda next to him, and James comes over, digging on the other side. Quickly, Tom discovers the idol and slips it into his sock before anyone notices. Anyone, that is, except Amanda. She notices him acting strange and saw him slip it into his sock. She tells Candice, then J.T., who tells Cirie. Tom meets up with Colby to tell him the news. Colby thinks they are back in the game. 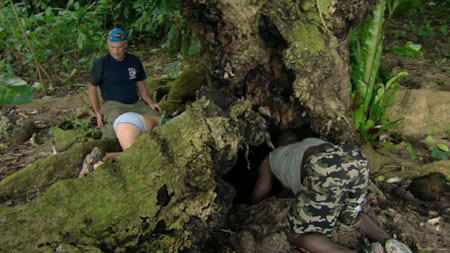 Immunity Challenge Time! Blind-folded Survivor-ball with a maze at the end! This is the one that killed Dread Russell last season. Jeff informs us that it's the only challenge never to be completed. His trivia sounds better. The Villains sit out Courtney and Sandra, the Heroes sit out Cirie. Jbox's fave and Tom are the ball riders. Coach and Tyson guide the ball to the end efficiently and get jbox's fave to work on calling the shots for the maze. James and Rupert spend a lot of time in the rough before they get Tom to where he needs to be. Both men guide their maze-persons like something I can't believe. 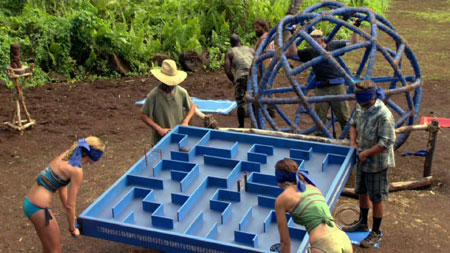 Some impressive calls and daring moves get them both close to the end, each ball rolling on the edge of the cup before the Villains can sink it for the win. The Heroes wear sad faces once more.

This is one of my favorite parts of the game, where the dangerous players are identified, and then left in the game to wreak havoc. Cirie and Candice want to get rid of the Tom/Colby thing. They plan to split the vote, three-three, so Tom plays the idol and one of them goes home, at least. Amanda asks J.T. what he thinks, and he says Tom isn't going to hurt them. J.T. wants to get rid of Candice, she can't be trusted. Tom meets before Princess Amanda's court, resting his case on trust, and she finds favor in him when he boldly offers her the idol. 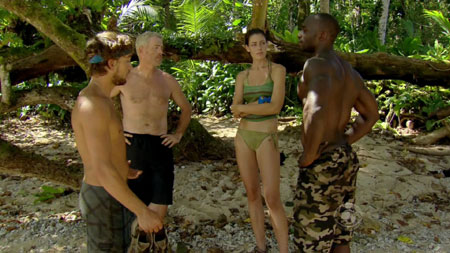 Amanda goes to tell Queen Cirie, who is immediately caught up in hysterics over this change in decision. She has a tantrum that draws over James and Rupert. J.T. also overhears this, and goes to tell Colby and Tom. They plan to assassinate the Queen with the help of J.T.'s vote.

Voting Time! Everyone takes a seat before Jeff begins his interrogation. Early alliances will send great players home early. Rupert would rather stick to his word than win challenges, and when he says it sucks, Jeff rubs his face in it. Jeff asks everyone how concerned they are about going home tonight. Colby articulates his worry the best, probably because his is the only authentic feeling of any of them. J.T. is honest about not being worried, though, he says he trusts his alliance, it's what got him there. His ambiguous phrasing makes Colby wince. Rupert kicks off the voting.

Candice votes for Tom, but thinks he's a great guy. Tom votes Cirie and compliments her dainty fingers. J.T. is shown writing a C because the producers are a bunch of teases. Before Jeff begins to read the votes, Tom plays his Immunity Idol. No votes count for Tom now. Candice's vote is read first, and it's invalidated. The second and third votes are also for Tom, still invalid. The fourth vote is for Colby, the first vote that counts! The next vote reads, "Coby," and somehow that counts against Colby. The next vote is for Cirie, then another. It's tied, 2-2! The final vote reads Cirie, and the Queen is beheaded! A stunning upset! Rupert can only shake his head. James is confused by the whole thing. 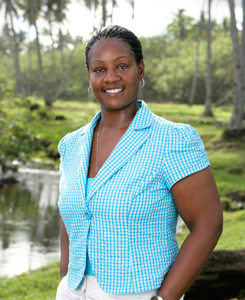 Next time, jbox's fave hunts Russell, Candice wants to seek shelter with Colby and Tom now, and it appears that the challenge that got Ben eliminated due to a violent kick make a return with a medical emergency.