Previously on ... UNCOMMON SURVIVOR; With only five members left, the hapless Heroes have hit a winning stride, sapping momentum from the Villains and getting them to weaken themselves by voting off strong competitors. Jeff gives credit to Sandra for her "brilliant" move in getting Russell to get rid of Coach, but he had it coming anyway. Now she and Courtney are playing the meta-game known as Surviving Survivor. The goal is to be the most pathetic specimen on the island whilst spending the most time there. Honestly, if Courtney gets any skinnier, I'm calling Paleontologists Anonymous.

In other goings-on, the Heroes think the Villains are dominated by women and, through an elaborate series of events, it appears J.T. may hand Russell a hidden immunity idol.

Right after the vote, Jerri's in shock. She's already got a screw loose and I think this paranoia might send her over the edge. To calm her, Danielle promises she won't write her name down. Jerri also asks Russell if he knew about Coach and if she is next. He avoids answering her first question and assures her that she is not. This is one you can believe him on.

The next day, tree mail brings news of an endurance challenge where the Survivors must rank themselves. This challenge was played during Survivor Trampolines and Courtney did an imitation of Coach to show that she remembered. For a stick insect, she does some good impressions. The Villains decide that using an all-girl team may give them an advantage. The Heroes take the opposite approach. Rupert is feeling very cocky. I can't believe people like this guy.

The teams meet up and Jeff asks the Heroes what they think of Coach being gone. This is a classic misdirection and Jeff is really playing it up, they all think it's an "obvious" strong female alliance. The challenge is an endurance challenge, standing on small footholds. The reward is a feast provided by Outback Steakhouse. I would eat so much prime rib, they'd have to call the medic and helicopter me out.

The match ups are as follows: Danielle vs. Candice, Courtney vs. Amanda, Parvati vs. J.T., Jerri vs. Colby, and Sandra vs. Rupert. Jeff tells us that J.T. won this in Survivor Tonkatrucks, Jerri vs. Colby is a throwback match up from season 2, and Sandra vs. Rupert is a rematch from the 7th season. Sandra doesn't seem to remember that. It's also the 100th day that Amanda has played Survivor, which is just plain nuts. She's been on Survivor longer than some prison sentences. Jeff starts the challenge.

Sandra loves Outback Steakhouse. She says, "the whole week before my husband left to Afghanistan, we went there twice." What does that even mean? Fourteen trips to Outback Steakhouse? Do you know what kind of bowel problems you sign up for eating even two Bloomin' Onions in a week? Well, Sandra does, but do you?

J.T. whispers over to Russell to hang in there, and Russell acts like he's begging for mercy. After 20 minutes, everyone's on the smallest foothold. Colby starts to struggle and they show a close up of him trying to wrap his foot around the foothold. It looks painful, and apparently is painful; Colby winces and slips down. The Villains score one and Jerri gets to rest. The next to start struggling is Rupert. Ugh, look at those hooves. Oh gross, now his beard is leaking. He collapses and the downpour of perspiration from his face ruins an expensive camera. The next to start to struggle is Amanda. She's no match for Courtney who probably isn't even exerting any downward force. Amanda tries to go into berserk mode, but it's no use. She falls and the Villains win the Outback Steakhouse feast with a clean sweep. Jerri cries and Sandra pretends to cry.

At the feast, Sandra compares her "job" of being on Survivor to what her husband is doing in Afghanistan. He has to be a better soldier than she is a Survivor, he just has to. Parvati discovers a clue hidden in her napkin and is able to conceal it in her underwear before anyone notices. And what the hell is that? Top sirloin? Pfft, send it back. Prime rib or nothing. Add a side of Yorkshire pudding, too. Parvati and Danielle sneak away to use the ladies' lavatory and Parvati shows her the clue, giving it to her to hide between her breasts; because nobody will look there. She doesn't want Russell to know, either. Man, he's going to be angry when he finds out.

Meanwhile, J.T. is so hungry for steak that he's spilling his master plan. They need to win the next Immunity Challenge, during which J.T. will explain to Russell the plan and give him the hidden idol so they can vote out Parvati. His plan is to write a letter to Russell. Amanda is cautious about the whole thing, realizing they really have no idea what is going on over there.

The next day, Russell keeps watch over Villaintown. Parvati and Danielle sneak away to search for the idol. They look for the "dancing trees" and begin to dig. Russell is shown walking down the beach but it's unclear if he's anywhere near them. They discover the idol and Parvati hides it. She doesn't want to tell Russell. If he's the king, she wants to be the queen.

J.T. writes his love letter to Russell and dictates it to the tribe. "Dear Russell, war is hard. How I miss the sweet scent of daffodils in your hair. Do you like me: yes/no (circle one)." He actually wrote that he wants to get rid of Parvati. Again with the needless targeting of Parvati!

Immunity Challenge Time! The teams meet up and J.T. can't stop trying to show Russell his rape eyes. The challenge is dragging a bag of puzzle pieces through a water course relay and then assemble. The challenge starts with Rupert and Jerri, Rupert gets to the end first, letting J.T. take off. Jerri finally finishes and Danielle starts. She starts to make up a little time. J.T. finishes and Amanda starts, keeping pace with Danielle. Danielle finishes and Parvati starts. Amanda finishes and Candice starts. Parvati finishes and Courtney starts, leaving Colby and Russell alone on their platforms. Colby tells Russell to go to J.T. after the challenge and explains the plan. Russell plays along beautifully and Colby leaps away with his bag of puzzle pieces. This deal with Russell has angered Poseidon and a violent storm begins. The Heroes finish their puzzle first and there's an awkward few moments of congratulatory handshakes and hugs. Russell and J.T. meet during this commotion and the package is delivered.

Later, Russell is sitting in a scummy pool of water, smiling at his new idol. He doesn't have to find them anymore, people just give them to him. Over in Herotown, J.T.'s eyes are shining brightly. He's just saved the world and made history! He's a Hero! At the same time, Russell is showing the letter to Parvati, who is reading it between giggles. She is very impressed with Russell's influence. Courtney and Sandra hear her laughter and share a bitter fist bump over it. Guys, fist bumps are yesterday, okay? Haven't you heard? Flying hip bump; all the ballplayers do it now. Courtney is pretty sure she's going home tonight, and I think she's correct. The order is passed down from Russell. Courtney later asks Parvati if it's going to be her, and Parvati deflects the question with adoration. You want to know how to lie? Watch that again! Courtney makes a sorry attempt to save herself, but it sounds half-hearted. Still, it works with Parvati. A small last-minute alliance is hatched between Courtney and Parvati, who is playing the game hard and fast now, spinning a secret web influence behind Russell's control.

Russell and Co. sit together and he shows them the idol. Knowing what we know, you can almost read Danielle's face: "How did he find it?" He tells them what happened and they can't believe it. I still can't believe it. How can they let Tyson's dumb move be forgotten so quickly!? Parvati makes her play to save Courtney, saying that she would be more loyal after the merge. Russell says it doesn't matter to him and Parvati finishes saying she can keep Courtney in check.

Tribal Council Time! Look at Coach in the kimono. I'll say it again, I'm so glad he's on the jury and not Boston Rob. Jeff gets to the meat quickly, Courtney and Sandra are in danger of being sent home. A small argument ensues when Danielle accuses Sandra of being manipulative. Parvati nails it a minute later, saying it was Rob's girls against Russell's girls, and these are the remnants. Courtney calls out Jerri for flipping early to save herself. Voting begins and Courtney winks at Coach.

The first vote is Jerri's, the second is Courtney's, then the third, fourth, and fifth. No saving the ethereal impressionist. 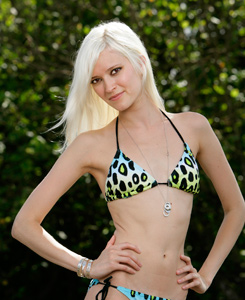 Bag of Bones by Stephen King, via wwwimage.cbs.com

Early congratulations go to Parvati, who also joins the 100 Days in Survivor Club. Next week, submerge your urge to splurge, it's the mother-fergin' Merge! Feces to fan blades ratios are expected to be off the charts.