Last time on UNCOMMON SURVIVOR: Stop me if you've heard this one: Russell defied the odds, making an exceptional tactical move that swayed what was a sure thing, either his or Parvati's elimination, into a jaw-dropping blindside that sent phallus-crazy Tyson to bantown. Tyson may have committed the dumbest move in Survivor history, which is fine by me, because he was also the unfunniest "funny guy" in Survivor, too.

Team Underwhelming somehow lost the logic they used to vote out Tom and finally rid themselves of the injured James, who put up a spirited effort to act healthy, and spared Colby, who has been softer and milder than the cheese which bears his name. Another thing about Colby, it does not age well.

Day 16 opens with jbox's favorite (once again, that's Boston Rob to the rest of you) saying that something doesn't feel right. I know what it is, he got gently caressed in the "parenthesis-underscore-exclamation-point-underscore-parenthesis" the night before, if you know what I'm saying. Courtney does a pretty good impression of Russell, and confirms the rumors that Russell doesn't bathe. However, she seems to think he's wrapped around Parvati's finger, and I'm not so sure. She thinks he's desperate for that attractive woman attention, but she doesn't know he's got enough money to Indecent Proposal. I wonder if Courtney would take him up on that offer. Jbox's fave is highly upset by the confidence displayed by Parvati and he's getting paranoid.

Jerri sneaks over to Russell while he's on the beach with his pretty dolls. She's sniffing around for security, the first rat off the sinking ship. She even makes peace with Parvati, who she hated. Russell takes all the credit, naturally. Jerri says something about her fears and that she's been single for three years, cackling. Just Jerri and the girls, laughin' it up. Jerri's actually, "crazy pants," according to Parvati, who makes a strong play with her, offering to ally up with her and take her to the final four. Parvati and I are so alike. I often add the suffix, "pants," to adjectives to describe people. Parvati even thinks ol' Jerr's jealous of Russell's sacrifice. Where was the Dragon Slayer?

Almost a quarter of the way through the episode, they show Colby for 60 seconds. He's excited that he's on his third straight Put Up or Shut Up situation, even though his performances have been as dull as the city in Wisconsin which bears his name, and as flat as the one in Kansas that also bears his name.

Reward Challenge Time! When Team Underwhelming shows up, the Villains are already there. When Jeff says they're, "getting a look at the new blank tribe," like he always does, I don't think it's ever mattered as much as this time. Without James, Team Underwhelming looks underunderwhelming. The challenge is aquatic foxy boxy basketball. The first round pits J.T., Colby, and Rupert against jbox's fave, Russell, and Coach. Rupert gets the ball first and runs away from Russell, whose short legs leave him struggling in the waist-deep water, and tries to pass to J.T. but it's tipped by jbox's fave. J.T. pounces on it but is restrained by Coach. Colby takes the first shot, and misses, gets his own rebound, and misses again. Rupert and jbox's fave are trying to squeeze each other's heads off. A couple scuffles later and Coach is on a break away to the goal, but his free shot falls comically short. Colby is able to harass Coach into making another one-handed shot, and then slaps Coach down, taking off with the ball to score for the Heroes. Redemption, thy name is Cheese Man. The Dragon Slayer can only shake his head.

For the next round, Colby and Coach tend to the goals while Danielle and Jerri get ready to tussle with Amanda and Candice. Candice takes down Danielle and Amanda grabs the ball, passing to Colby, who again manhandles the Dragon Slayer. His only problem is his 33% shooting percentage because he misses. Coach gets the ball, but Candice hangs on him until he gives it up. Jerri grabs it, only to have it snatched away easily by Colby, who passes to Candice. Her shot rolls along the rim but rolls right out. Coach takes a long shot on the rebound, missing by a lot. Jerri, being closest to the ball, rushes over to it, but is overtaken by Colby and thrown under water from behind. Colby passes to Amanda, who gets stuffed by Danielle twice before passing to a wide open Candice, who sinks her shot from right under the goal.

The next round is back to all dudes. It's a shame I'm already using the term, "jbox's fave," for Boston Rob, isn't it? J.T. rushes out to grab the ball while Russell and Rupert tussle it up in the deep end. J.T. passes easily around Coach to Colby who sinks the goal and wins it for the Heroes. He even exclaims, "Redemption!" like some kind of milk-based food product cliché.

The Heroes show up at the "outdoor" waterfall and begin to eat before Candice ruins everything by mentioning the clue scroll on the table. They decide to wait a few moments, and after sitting for a few minutes shifting their eyes back and forth, Amanda can stand it no longer, getting up to grab the scroll. She reads the clue and they make a pact to fight together and unite as the forces of good against the forces of evil.

Back over on the Villain's beach, Jerri and Russell are having a talk while Coach jealously looks on. They invite him over to sit down but he just stands, avoiding eye contact while Russell gives him the proposition. Jerri has aligned with Russell and that makes Coach mad that he's not the decider. Jerri doesn't trust jbox's fave any more, now that he's got the stink of loser on him. Coach defends his idol, but he doesn't want to talk about that first, he wants to talk about his hurt feelings. He wants to know she still trusts him more. She says that she does, but she can't finish a coherent sentence. Coach, fighting back his tears, tells her he can't believe she put all her eggs in Russell's basket. That's an early Easter tip for everyone; put your eggs in multiple baskets. It sounds like they're going to break up, the piano music is perfect.

Immunity Challenge Time! The challenge is a relay race across a slamball course with a puzzle at the end. Jeff collects the Individual Immunity necklaces and declares the Tribal Idol back in play. Sandra is playing for the Villains, so I expect them to lose. The race starts and everyone is falling on their faces. It's fairly even until Candice falls a little more than Courtney and the Heroes fall behind, only to make up the time and then some when Courtney clings to the net too long and is afraid to jump. This gives Colby a half run's lead over Coach, letting the Heroes begin their puzzle sooner. Sandra can't even open a bag of puzzle pieces as jbox's fave struggles around her. J.T. and Amanda quickly finish up the puzzle and the Heroes are saved from the vote. Coach blames Courtney, I blame Sandra.

Back at Villaintown, Russell is none too happy with the performance of jbox's fave and his supporters. Russell spends some time talking with them, getting a feel for how their alliance is holding. After, jbox's fave goes to talk to Coach, asking him what he's doing. Coach is all out against Courtney, but jbox's fave sways him to swearing against Russell. They walk off together, sharing a bro-ish embrace. Later, after a bird eats something out of the water, Russell, Coach, Jerri, and Danielle are chatting away. Russell says he wants to get rid of Courtney and Sandra, calling them snakes, before saying he thinks jbox's fave could go home. Coach tells Russell that jbox's fave has been gunning for him, but Russell says he's trying to keep the team strong. They start to discuss blindsiding jbox's fave and begin salivating at the idea, but Coach doesn't want to stab someone in the back who just gave him a bro hug. He stares at his tribal buff with tears in his eyes, and tells the camera that we can see on his face that he doesn't want to do it, which means to me that he is going to do it. He wants to win, but not at all costs? What game is he playing? Jerri talks to jbox's fave in the tent and even though she doesn't say it, it becomes evident that he is scared and begging for mercy. He tells he she knows what to do, which when he says it sounds like, "get rid of Russell," but when she says it to Coach, it sounds like, "stab Boston Rob in the back because it feels good, man." She tells him she's not a good Villain.

Tribal Council Time! Sandra says something forgettable and Coach pretty much lays out the alliance blueprint for Jeff. Coach thought that Tyson bridged the gap in the tribe. You can predict who agrees and disagrees. Jbox's fave claims that, "some people," are more concerned with preserving their alliance than the tribe, but Russell calls him out for trying to get rid of him. Jbox's fave then retreats to saying they have different ideas of loyalty, with Russell recalling his sacrificial act from last council. Russell tells him he probably doesn't have the guts to do what he did. Coach thinks the two soldiers need to get along for the good of the tribe, but Jerri sounds committed to getting rid of jbox's fave, who shoots pleading a glance over to Coach as Jerri's words hit him. 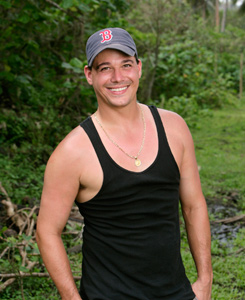 Next time: A muddy challenge and the Villains completely implode.