Last week on UNCOMMON SURVIVOR: the greatest ego showdown Survivor's ever seen came to a head.  It finally came down to Boston Rob against Russell, and the little troll triumphed once more. I feel like this is the part of the movie you don't see in the days after the Death Star was blown up or Han Solo was frozen in carbonite. What do you do the day after a legendary saga comes to a close?

That same night in Russellville, it's the Russell Show of course! Everyone's pleased as punch, everyone except Coach. He thinks Russell is a bully and he's mad at Jerri for getting rid of Rob. He asks her if she wants to make a play, but she wants to wait it out for the Merge. Then he gets all Jonny Dub, saying they won't win another challenge.

Last time, the Heroes made a pact to search for the hidden immunity idol referred to in the clue they received at their victory feast. That doesn't stop J.T. from trying to casually stumble upon it the next morning . Amanda, noticing everyone has disappeared from camp, heads in J.T.'s direction. He finds it buried in the mud, and lacking the urgency required to pull off a stealthy escape, stands there unwrapping it. Yes, the tied up piece of canvas you found on a Samoan island is, in fact, a hidden immunity idol. Amanda discovers J.T. looking like he just got caught with his Metapod out using Harden. He shows her the idol, and as they're walking back, Candice finds them. He decides the jig is up and shows it to everyone. Having a big target on your back doesn't sound so bad to him. Candice doesn't like him and plans with Amanda to get him out.

Back in Russellville, everyone's eating campfire hermit crabs. I like mine with a little garlic and lemon butter. Jerri dons the drama crown, saying they're all going to die to Coach. He shakes his head in disgust as he tells us everyone is starting to shut down. You can see it, too. Russell's the only one with bright, active eyes. Everyone else looks tired and sick, except Courtney, who always looks like that. Parvati reads Tree Mail and they think it's the Merge; "a challenge of good clean fun, and their best meal yet." They decide to pack up their camp to bring with them.

Reward Challenge Time! Looks like pizza and slip-n-slides. Jeff asks the Heroes what they think of Boston Rob's dismissal. Rupert think it's an all-girl alliance. You bearded fool! Jeff explains that everyone will have the opportunity for food and notes that the Villains have brought their camp and Jeff let's them hang on his every word, "Drop... your... expectations." No merge! He had them going.

I was wrong, it's Survivor bowling. It's like regular bowling, only Survivor. I guess this is what you do right after an epic showdown, right? The Villains have to sit out two, and after short deliberation, Coach says that Sandra and Courtney will sit out because they have noodles for arms. The first round features Parvati against Rupert. She gutters her first shot and Rupert hits three pins. Parvati's next shot is just as useless, another gutter. Next is J.T. against Danielle. J.T. goes first, rolling with authority and knocks down six pins. Jeff, perhaps reading my mind, notes Danielle's excellent form. She guttered it anyway, but it looked nice. J.T.'s second shot doesn't hit any pins, giving Danielle a chance, but she gutters again. Next is Colby against Russell and they each miss completely on their first rolls. Colby even bounced his shot. Jeff says it's, "zip - zip," and I wonder if he's ever just said, "zero." Russell takes out five pins on his second shot and Colby is only able to hit one, giving the Villains their first point. Next is Coach versus Amanda. Coach goes first and knocks down five pins. Amanda also knocks down five. Coach's second roll yields just one more pin, leaving Amanda needing two to win. She rolls and it screams down the lane, kissing one pin enough to topple it onto another pin. The two she needs fall and the Heroes win pizza and the Villains get to carry their stuff back.

The Heroes march up to their feast and Amanda toasts to the best team on Survivor. I'm not sure what she's talking about, but I guess she can get by on the technicality that there's only two teams on Survivor right now, and one just lost. Then they begin to speculate on what the Merge will be like since the women have taken over and Russell and Coach are on the outs. Man, they have no idea what's coming. Just one Russell is all it takes.

The Villains get back to camp and Jerri is pissed that Sandra and Courtney sat out so now they have to be used in the Immunity Challenge. Sandra is within earshot of all this and let's Jerri know. The argument gains steam as fingers are pointed, mostly at Coach. Sandra is having difficulty understanding why it's her fault that she's terrible at Survivor. She says she should not even be there. Correct! She should be on the Heroes. Wrong! She hates just about everyone, so that makes her a perfect candidate to be a Hero... right guys? Without warning, a neuron is synapsed through her brain and she hatches the idea to tell Russell that Coach is gunning for him. It would be a clever plan if that weren't already happening, this is just greasing the skids.

Coach still doesn't want to play Survivor unless his friends are there. He tells Courtney how bad it sucks to be them instead of trying to rally. Russell, with Sandra in his ear, sees the two talking, and she tells him that Coach said he'd made a mistake before. Courtney walks alone on the beach for a bit and you can see her entire pelvis. She looks like a ten point buck. Sandra is very pleased with herself at her "move." Russell, however, is also pleased. He gets to eliminate Coach and keep up the appearances of the Amazon Alliance so a Hero at the bottom of the totem pole is bound to seek him out.

Immunity Challenge Time! Looks like the Muddy Buddy! It's a Muddy Buddy Shuttle Run! Jerri and Danielle sit out for the Heroes. First round is Russell tied to Sandra while Candice and Amanda go for the Heroes. Russell tied to Sandra reminds me of the time Chet got dragged around by Joel. The girls get a slight lead because Sandra sucks. She gets completely stuck in the mud and you can see how pissed Russell is through all the mud on his face. Coach races Rupert one on one next. Did they just do that to Russell for laughs? Coach sprints out ahead, but Rupert catches him near the flag and takes the lead. Coach gives it his all and regains the lead to score for the Villains. Rupert's muddy beard is terrifying. Saying that things live in it would be being nice because I don't think it could sustain life. Next is J.T. and Colby against Parvati and an adjacent phasmid. The men surge through the mud while the two ladies daintily play in the mud. J.T. and Colby win by a large margin and the Heroes win immunity. Courtney pretends to be hurt for a moment for sympathy but it doesn't work because Jeff threatens to call the medic. Danielle wants Courtney gone.

Coach surveys the scene back at Russellville, everyone's scraped and bruised from fighting with the Earth. Coach flexes his one good arm (ol' Righty) and says he's just coming into his own. I find this funny since he's flying high after he beat the old 9-toed man and didn't have anyone tied to him. He's torn between trying to get rid of Russell and trying to win the next challenge. Russell says Coach is the next to go.

Danielle makes a play to Russell to save Coach and get rid of Courtney, and Russell doesn't like it at all. He thinks they're just going to keep losing challenges regardless of who they keep. Danielle disagrees and it turns into an argument. Sandra is able to overhear this and tells Courtney. Ugh, Courtney's underoos don't even fit her now.  After some time to think it over, Russell goes back to Parvati and Danielle and tells them he thinks Danielle is right and they can get rid of Coach any time they want. Famous last words! Parvati remarks that the tribe cannot make a decision to save their lives, which is funny because she's never had an idea or a strategy and she's never present when there is one. There's a comical scene where Danielle, doing her best, "I'm not a narc," walks up to Sandra and Courtney to ask if they are, "cool." Narc!

Tribal Council Time! Jeff wants to know what happened the last two councils where Tyson and Rob were extinguished. Jeff wants to know why them and not Courtney, "no offense." She's upset by being singled out and told she sucks, but she also agrees with Jeff; she sucks. Jeff asks Coach what the outside opinion of the tribe must be. Coach thinks that everyone is laughing at them, which is a feeling he must get often. Wait a minute, is that a loon feather and some beads in his hair? Okay then, yes, everyone is laughing. Courtney sums it all up nicely, laying the blame on Coach for sitting her and Sandra because he really wanted pizza. Coach is taken aback and tries to distance himself from any faults. He has nothing to do with anything! Jeff asks Parvati if she thinks the slide will ever end and during this, Russell and Sandra share a look. She seems to be palling up nicely with someone she hates. Courtney says two words that are permissible on network television to sound like a badass. Finally, Jeff asks Russell what's going on. Russell says he's going to vote to make the tribe stronger and build trust at the same time. A couple faces wrinkle as they try to figure out what he meant.

Voting begins with Coach. Courtney votes for him, writing quotes around his name and calling him a lunatic. I would like her to drink a glass of milk every day so that one day I can high-five her for that. The first vote is Courtney's. The second reads, "Coach Dub" but it looks like, "duh." How did they know I already said Coach was Jonny Dub'n it? I'm scared! The next three votes are for Courtney, and the second to last one is for Coach. Tied 3 apiece, the final vote reads Coach. He is the first member of the jury! Aren't we lucky Boston Rob was gone last week? Phew! Russell shakes Coach's hand and Jerri kisses him. 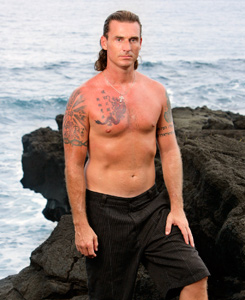 Next week, Frodo J.T. carries the Ring of Power Immunity Idol all the way to Sauron's pad and contemplates handing it over to the Dark Lord Russell.