Last time on UNCOMMON SURVIVOR: Sandra spent the whole episode trying to convince the Heroes to get rid of Russell, only to turn on them when she learned Candice was flipping. The whole thing would've been a brilliant scheme had she actually intended to get Amanda out, but this is Sandra we're talking here.

This episode features a double header, which is good because they need to get on the stick. It's Night 30 and there's too many people left.

Right after the vote, Rupert can only talk bad about Candice because it's what you do in this game when you're on the losing end. Russell says it for me in the next scene, "What game do they think they're playing?" Rupert's getting himself more upset by the minute. He's going to prove to everyone what a disgusting person Russell is in front of everyone! He starts by saying that he's a liar for swearing on his kids, but what are you going to do? It's Survivor and people eat that crap up. They weren't even sure if he had kids! Russell tells him that it's the game and Rupert fucked it up for himself. Rupert says that if he wants to lie and call it the game, then that's fine; if that were true, why's Rupert's butt so sore? Oh, because it's not the way he played! The rest of the tribe is getting a kick out of the drama.

What do you know? It's challenge time already! Jeff always makes a big deal about taking the Immunity Necklace back. For once I want to see someone compete in the challenge with it on. The challenge is some kind of one-armed bondage trap ending with a bucket of paint. I think there's a name for that, but I'm not depraved enough to know what it is. Along the way, Jeff is going to tempt them with items, most likely food. After just 60 seconds, Jeff is doing just that with a covered tray. Both Russell and Sandra want it and they douse themselves to get it. They get to split cookies and milk, but my appetite was ruined right before it was unveiled by Danielle's arm pit hair. After 20 minutes, Jeff comes back with four doughnuts and an iced coffee, which is enough to make Colby slime himself. As he finishes his iced coffee, Candice tries to ask Danielle if Parvati's going to drop out because someone has to beat Rupert. Just as that happens, Jeff's bringing out another tray that he reveals to be a pile of peanut butter and jelly sandwiches. This makes Candice, Jerri, and Danielle wet themselves, with Danielle's shorts being ripped off from the force. Only Parvati and Rupert are left; Rupert has to win to stay alive since he's angered the beast, and Parvati is hanging out because she's lighter than air. After an hour and ten minutes, Rupert literally can stand it no longer and falls. Parvati wins and Rupert doesn't even get any food. He's pissed, too. I love it. Jeff reads them a clue to a Hidden Immunity Idol before releasing them back to camp.

As soon as they're back at camp, a frantic search begins. And who of all people finds it? Sandra, the one who took the reference to a burning bush in the clue to literally mean a bush that was on fire. She moves it to another location and hides it again. Meanwhile, Rupert puts a rock in his pocket to try and simulate the idol, because he's badly in need of a friend and he's not entirely above deceit. Russell takes Rupert's bait and thinks he has the idol. He plans to split the vote between Rupert and someone else, and the Villain ladies decide it could either be Colby or Candice. Colby overhears this and reports to Rupert. They decide to vote for Candice because on the chance that the Villains vote for her, she'll have five votes against her with theirs included.

And can you believe it? It's Tribal Council #1 time! Jeff brings everyone in, including the newest jury member Amanda. Right away, Rupert's blaming Candice. She says the numbers were there and her vote didn't change anything. Colby, who's also more concerned with vengeance than winning, says he doesn't have any respect for the excuses. It's funny to watch those who are on the losing end disagree with the her while Russell is nodding along. Player haters. Russell says Rupert's the one he's gunning for and that if he or Colby don't have the idol, they gave up. Voting begins and Colby goes first. I laughed out loud at his little message for Candice. "I can honestly say I'm proud of the way I played this game, can you?" Then he splashes Gatorade on his face and sneers. Candice gives us the passive-aggressive way to express that you're thinking hateful thought about someone. Jeff asks for any idols to be played and Rupert stirs in his seat. This is as far as his little pocket rock bluff goes. Jeff reads the votes and gets to three for Rupert before it's evident that the Villains chose Candice, too. She's eliminated and Jeff sends them on their way. 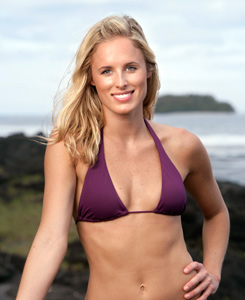 Back at camp, Russell's pissed that they didn't split it between Colby and Rupert. He seems to want to hammer this home to the ladies instead of just forgetting it and moving on. He also admits that he's got equal control of the game with Parvati, and that makes him nervous. He vows to regain control of the game again.

The next day it's already time for another challenge! It's a three stage challenge that I call Peg, Peg, Slide. Do a peg maze, scale a wall with pegs, then do a slide puzzle because we didn't have any puzzles with pegs from previous seasons. The challenge starts and Russell's out in front, but Rupert digs up his peg first and gets a good lead on the maze. Soon, everyone's on the maze but Colby. Rupert maintains his lead and finishes first, then... again, of all people, Sandra. She can't believe it and neither can I. Were these challenges held at the same times of day? Because that broken clock's been right twice in a row. Russell, Parvati, and Danielle finish and move on to the peg wall.

When the next section begins, Russell scales the wall in no time with just two pegs, but that damn Rupert refuses to die. After mimicking Russell's approach and failing, he makes up time and finishes just behind Parvati and her Spider-woman skills. Russell dominates the slide puzzle portion, too, and wins immunity while Rupert gets close but ends with frustration, clawing at the pieces that can't be picked up. After, he admits that his lie of a rock in his pocket is not going to save him. Probably not going to get him very far on dates, either.

After the challenge, everything seems cut and dry: get rid of Rupert. During yet another obvious strategy meeting, it occurs to Russell that Parvati and Danielle are more of a team than he and Parvati are. Rather than wait a damn day, he decides to act on this immediately and tell Danielle that he doesn't think either of them can beat Parvati in the final. He might even be right, but good gods, man! Wait a day! He goes to try and spin a tale to Parvati, too, and then flips out at her when she tells him that she's going to talk to Danielle about it. The girls compare notes and are able to ascertain what's happening. Russell sets his sights on Danielle to "scare" Parvati into coming back to him. He rallies the defeated Heroes and fist bumps Rupert because they're buds now, or something like that. Danielle and Parvati recruit Sandra and Jerri. Before they leave to vote, Russell finds Jerri and tells her she has to vote Danielle or she'll be next. She thinks this is a threat, but really, he could lose complete control. I don't think it matters who's in charge because unless Jerri gets really lucky, I don't think she can win.

Second Tribal Council Time! Everyone's brought in and Candice looks like she's got a bad sunburn. Jeff asks Rupert who's calling the shots and this time he nails it; Russell and Parvati. Danielle doesn't agree, maintaining that they just all agree. Jeff says that camp must be pretty peaceful then, and everyone snickers. Jeff gets them to spill what happened earlier. Jeff tells Russell that he got caught, but Russell denies... or he admits to it, I'm not sure. He used a double negative in his answer. He's tricky like that! Danielle tries to talk over him, calling him a liar, but then she starts to cry because she doesn't know why he's testing her. Jeff asks her what she's crying about and she says she's exhausted and had a tough day. I'm sure you were shocked when nobody felt the slightest bit sorry for her. She mumbles a bit more between sobs before saying that she's closer to Parvati than Russell thinks. Russell gives her an O RLY? and mouths "Danielle" to Jerri. Danielle doesn't seem to understand that gravity of those words at that moment.

Voting begins and Danielle goes first. Parvati goes next and votes Rupert. Russell votes for "Danellie." Jeff grabs the votes and asks for any idols. Rupert shifts again. I think he needs some ointment. The first three votes are for Rupert, then the Danielles start falling in, tying at three. The final vote reads Danielle's name. Parvati whispers to Russell that that was messed up. I'll say. Rupert is still in the game! 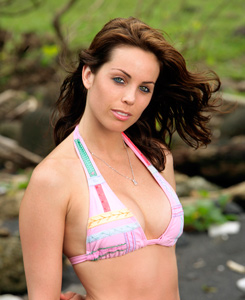