The Acme Oyster House in New Orleans, LA held the 2010 World Oyster Eating Championship today. I think I could've handled some oyster eating, those slimy little wads of flesh slide down real easy. Grandpa always told me they put lead in your pencil, and pencils need lead, so that's good, right? I'd have preferred Oysters Rockefeller, but you take what you can get, I guess.

More after the jump.

Sonya "Black Widow" Thomas defending her title, having won last year's competition, as well. Homegirl is cleaning up, y'all. She consumed thirty-seven dozen oysters to take the title. I asked Jeeves what that meant and he said that's 444 bivalves. That's a shucking fitload.

Here's Sonya with the belt: 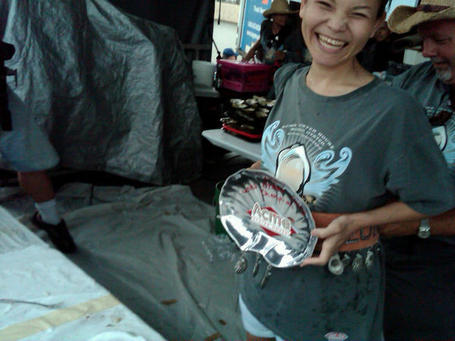 If you like oysters, you'd better get 'em while they're cold and not oily. With BP's continuing failures and the already massive oil damage in the Gulf of Mexico, oyster beds are being shut down. This CNN report claims that business has been booming at Acme because customers are trying to eat as much as they can before they're gone.

There weren't any other results posted for the other competitors.