Hi there. Can everybody hear me in the back? Yeah? Okay. Everybody have a good summer? Good. Maybe you noticed we kind of took the summer off. Maybe you didn't. If you did, good for you; feel free to purchase these foil stars and place a gold one at the top of your monitor, you earned it. If you didn't; welcome back anyway, jerk. Either way, we'll be back for this fall TV season starting Thursday morning with the return of Uncommon Survivor. They'll be in Nicaragua this season, so we're going to be pronouncing everything with what I imagine to be a Nicaraguan accent. Basically, we'll just roll our R's and call it Uncommón Survivór. I also say "we" because I'm putting jbox on the spot without consulting him first.

How was your summer?

Here's what I remember doing: 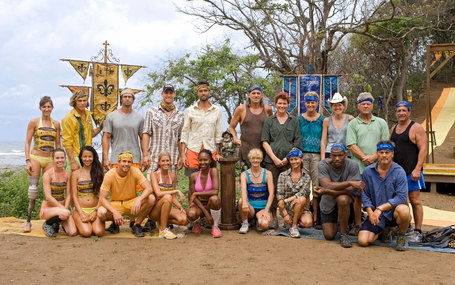 Jimmy Johnson looks all mad. There's one girl with a fake leg, wouldn't that be rude if that made her use it as her luxury item? The rest is a bunch of token characters making sure the race and age diversity requirements are filled. See you Thursday morning!