When last we huddled around the warm glow of our televisions, Shannon from the Young Tribe questioned his tribes most effeminate member's sexuality and declared New York to be the gay.  As is the problem with most Survivor contestants he wasn't able to keep his mouth shut and it cost him.  At least his torch isn't flaming.

The episode starts with the Young Tribe circled around some night vision cameras vowing in the dark to be a tighter unit and more accepting of units thrust into tight dark areas.  NaOnka doesn't buy it for a minute.  She is busy wagging her head back and forth and telling it like it is.  This tribe is still split, there are those who were with Shannon and those who were there to make a minority the winner.

Over in the Retirement Home, Jimmy Johnson is raising morale while fishing.  Meanwhile Jane catches a fish with the support of Jimmy J.  Unfortunately there is no blurring because her bathing suit is riding so far up, that the only way my morale could be raised is with Jimmy J's extenze.

Old man Danny complains that he only gets 2 hours of sleep a night and that his surgically repaired knee makes him only as strong as a woman.  Meanwhile the women can freely move up and down while Danny struggles to sit on a log.  Everyone notices.

The teams meet at their next elimination and reward challenge.  The Old Folks are shocked that Shannon was voted out, but really it's not a bad move.  You don't need Shannon's strength on your tribe when you have youth and you're competing against old people.

The challenge is simple.  Roll barrels into place and throw small sand bags on top of the barrels.  The kids are allowed to use their idol if they want a head start but decide they don't need it. Jeff tries to instill a sense of urgency on the Old Folks, but there is no real need to rush, they'll catch up when the sand bagging begins and they do.  Tyrone is designated sand bag tosser for the oldies and Benry throws for the kids.  Who is Benry?  Did he just arrive? Never seen him before.  You think I'd remember somebody with a dumb name like Benry. 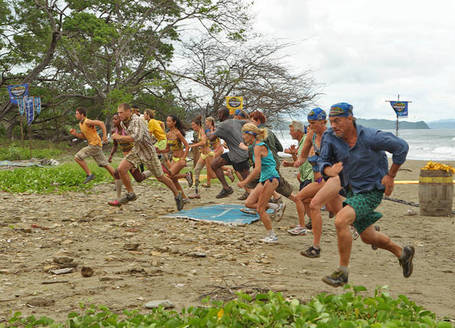 Tyrone takes the early lead but eventually runs out of gas and misses 50 in a row, while Jimmy T. speaks about his better qualities in the third person.  Jimmy T. is in Jimmy J's ear begging for the coach to put him in.  It's funny how Jimmy T. thinks he's a leader but even he knows to go to Jimmy J. when a decision needs to be made.  Eventually Jimmy J. puts him in but it's too late, youth has won out.

It comes time for the kids to take their reward of spices and fruit.  Shannon was wrong, when given the opportunity Sash didn't rush to pick up the fruit.  Instead it was One Leg Kelly and NaOnka.  Kelly sees an immunity idol clue, but so does NaOnka.  Cut to NaOnka shoving Kelly out of the way crushing bananas in the process to get the clue.  NaOnka tells the camera that she didn't go "ghetto" on Kelly, she went "hood".  She tries to explain the difference but they both sound equally bitchy.  She says she'll shove Kelly out of the way again if necessary even if it means that she knocks her leg off.  She's an endearing character.

NaOnka alone with the clue is the same as NaOnka being alone, because she's too dumb to figure it out.  She shares the clue with Brenda who only provides minimal help.  Here try for yourself: 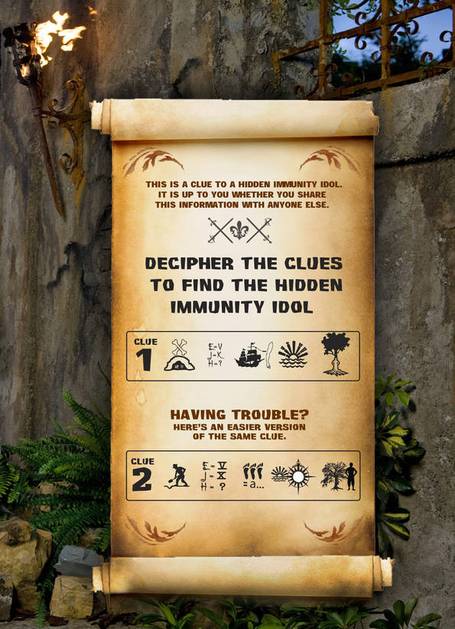 When the old folks get back home they face the decision of voting off one of their own.  Marty and Jimmy T. can't stand that they aren't in charge of the tribe.  Marty wants the tribe run like his board room and Jimmy T. wants to talk about himself while everyone listens.  Marty tries to convince Jill to vote for Jimmy J. but she's uninterested in strategy or playing the game instead she tells him to let her know who to vote for.  Marty wants to explain his strategy but Jill couldn't care less.

Next Marty shops his idea to Jimmy T. who also wants Jimmy J. gone so that he can finally display his leadership skills to the tribe.  It's an easy sell.

At Tribal Council Jimmy T. tells Jeff that he hasn't had a chance to talk about himself to Jimmy J. yet.  Jeff thought that 8 days in the middle of a jungle together was sufficient time.  Apparently Jimmy T. is a more complicated fellow.  Jimmy T. says there are 4 weak players on his tribe.  Jeff asks each of them if they believe they are weak.  Only Jimmy J. admits to it while he is obviously not the weakest member. It's Danny and his womanly strength and the coach knows it.

Time to vote.  Everybody votes off Jimmy J. as far as we can tell.  Jeff reminds the tribe that they've just voted off one of the best leaders of all time.  Marty and Jimmy T. look confused because they weren't voted off. 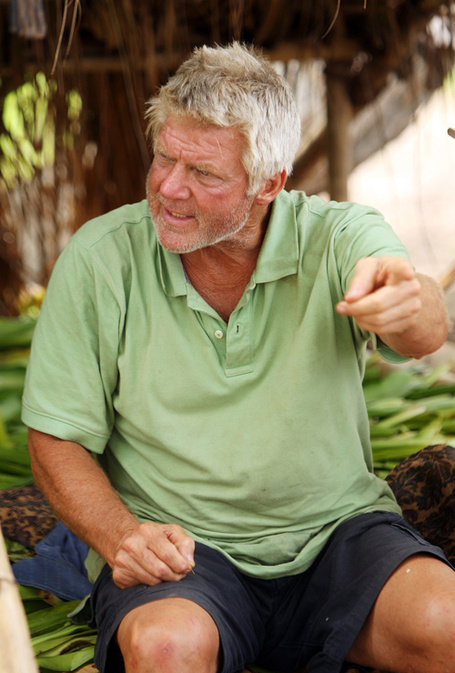 Next week on Uncommon Survivor: NaOnka is a bitch.