Previously on UNCOMMON SURVIVOR: Everything led up to Coach going in for a hug and getting denied by the freshly voted-out Stacey. Boom! Bam! Bizzam! On the other side, the Revenge of the Nerd(s) plot line takes root.

I think jbox was "live" tweeting the episode last night. Looks like he was grossed out a lot. Remember, if he sees his shadow, we won't see him for two more weeks.

Stacey damns everyone that voted her out to hell with gasoline pants. Someone doesn't know her states of matter! In her opinion, Tribal Council was fake. Look Stacey, you can't have a real fire in the middle of your set, it'll smoke and smolder, you'll have to keep throwing logs on it, you have to protect it from Brandon's tears; way too much to worry about.

Giddy-up, high horse! Brandon thinks Mikayla displayed a lack of class because she's prejudiced against his family. Someone protect the fire, he's crying again; this time because the knowledge that someone he want to fornicate, marry, and kill hates him.

Give these two women a sitcom together. They're sassy, they don't abide by nicknames, and they dish out the gossip. I'm dying to hear some Halloween jokes and some Chuckie the Cheese jokes, too.

Oh yeah, the challenge: balls in the chute! Christine tells her "Go, girl!" which is pretty fake. C'mon, you can't be rooting for her unless you're quitting. Stacey's strategy of not thinking at all doesn't pay off. Boom. Kablam.

Albert delivers the bad news to Coach: someone isn't calling him Coach. Apparently his parents have been calling him that since he was 18. Okay, if true, that is just expletive weird.

Ozzy and Elyse chillax while Cochran carries a bundle of sticks. Dat popped collar. He's starting to get really pissed that the good-looking people are his betters. When Ozzy asks Cochran how to spell his name, you think he was going for a penis joke? The little Cochran that could? I'd bet a dollar on it.

When Dawn returns with Stacey's news, Ozzy tells everyone to chill, relax, mellow your stoke, and stay positive. Jim jumps on the suggestion that Coach has to get rid of Albert now. What? Is there some kind of DADTpolicy Coach would have to follow? Why would they have to get rid of him? Jim's spinning it another way, though; fear will somehow motivate people to get rid of Elyse because of that.

Albert goes to look for an idol and this is the first time we've gotten to talk with him. He's a "dating slash baseball coach." When you think about it, it makes sense. First base, second base, third base, vagina. All Albert can do is find a clue, so he goes back for Coach and x. Oh, wait, stop looking: nobody prayed yet. Okay, done. Now it appears to him.

Cochran is going for his first big boy boat ride! How exciting! Ozzy has invented underwater yoga while he fishes. Cochran is not impressed by this new exercise. Cochran has obviously never seen hot women wearing lululemon. Just add water.

Immunity Challenge Time! M-M-M-MEGA MEAT CHALLENGE! Rip the flesh with your teeth and mock the vegans at home. Win by being the most ravenous group of carnivores. Oh yeah, get those microphones in there. Spitting noises. Juices. Awww, they're baby-birding each other! Also, some people are just plain spitting. Gutsiest eater is Mikayla; she doesn't abide by any Seconds Rules. Ozzy ends the challenge like a pit bull.

Winners get to take home the meat! High-fives all around, right? Don't worry, the bacteria-filled spit already on the meat won't turn it completely rancid for a couple hours, plenty of time to warm it up under the hot South Pacific sun. Brandon cooks the spit meat up and it's so good that Coach gets high and mimes driving a car.

Cochran can't help himself. It was too silent, things were going too well, and those girls were just too hot to not bring up contracting oral herpes. He's just so excited he might get a viral infection from someone else.

Ozzy starts getting votes ready for Cochran, but Dawn and Jim are working against him. Jim takes no time at all to convert Keith, who used to be Ozzy's bestie.

Hey, look, a country lady named Whitney. It's Week 5, it's too late to be bringing people out of the forest! I wonder if some of the boring people are told to just hold cameras or booms when the cool people are doing stuff.

Tribal Council Time! It turns out, you should obey all speed limits when eating meat because you can hurt your food muncher if you go too fast. Plus, everything you wanted to know about Cochran's mouth and more! 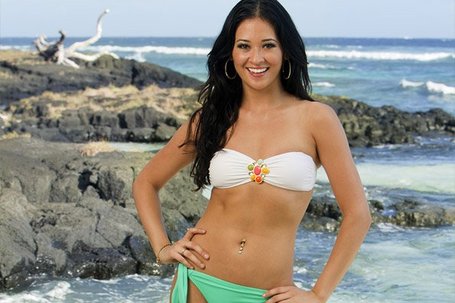 "Ignore the Kraken behind me." via www.cbs.com

Next time: Ozzy goes ronin and Coach is finally creeped out by Brandon.