Previously on UNCOMMON SURVIVOR: Coach mimes driving a SmartCar, Cochran begins the nerd revolution, and everyone made you never want to eat barbecue again.

If you are one of those dirty console gaming peasants playing Batman: Arkham City, I hate you and don't talk to me.

Ozzy's stoke has been totes brought down by negative energy, man. He declares free agency for himself and gives up the fact that he's had a hidden immunity idol. Ozzy wants to let it all hang out now, no more secrets from him. I hope he keeps his loin cloth on, at least. What a weak implosion.

Jim's delighting in Ozzy's tantrum. He says he doesn't think Ozzy could have made a worse move. I can think of two off the bat: punch somebody or steal something. Cochran calls Ozzy a stupid bitch and everyone laughs. Sometimes nerds can be bullies, too.

Breakfast skillet is on the menu at Upolu. Brandon cannot shut up about his uncle. I don't even want to talk about him finding the clue. He looked under the weird tree, what a talent. Coach raises a philosophical question: is lying by omission actually lying? Yes. Yes it is. Don't worry, Coach didn't lie by omission for long, he changed gears to good old fashioned regular lying when Brandon asks if he thinks anyone else already has the idol. "I don't think so.." Whoa, Coach's having real nightmares about this. I really didn't think he'd sleepwalkmurder (that's a word now) Brandon before Brandon could ragepassionmurder (also a word) Mikayla.

Redemption Island Time! Just spitballing here, but this Island needs a different name, it's really more of a Delayed Elimination slash Isolation Island. It made Christine cry, that's not redemption, either. Aww, Elyse won Rock-Paper-Scissor and they edited it out. Christine gives Cowboy Guy Rick the finger after he cheers her on. I would have gone with a shuffleboard-related pun, I mean it's right there. Puck you! They would have aired it, too. Instead she just wearily eliminates Elyse. There goes Ozzy's chance of getting to Survivor 3rd base.

Coach is getting really doing the creep on Edna, like they should keep a camera guy with them so there's evidence creep. After enough sucking up from her, Coach gives her the Dragonslayer Oath.

Ozzy and Keith have their moment. Keith is such a mastermind, breaking up Ozzy and Elyse, then swooping in to pick up the pieces. After the bros reunite, Ozzy apologizes to everyone. I don't think that damage ever gets undone.

Challenge Time! Build a giant slingshot and shoot the faces. Jeff belittles Ozzy and Savaii for not being able to use a wheelbarrow. I guess that mean's Ozzy's free agent value is at rock bottom. Good for them that Upolu is terrible with slingshots. They keep hassling Mikayla about using one arm when she pulls. People, it's not in the arms here, it's in the legs. Jim scores the final shot like a boss. I think he even walked away as the coconut exploded. Coach blames Mikayla and only Mikayla.

At the reward, Dawn is going to die because of the sandwiches. It's the carbs, right? Cochran comes out of his shell to give himself a heart attack on a mossy slide. Go back and look at his face: I think he was convinced he actually died.

Over at Upolu, a rotten fish covered in flies. Great. Coach starts out thinking Mikayla is going home, but Albert has something to say about it. Beehive! How long 'til Coach goes after it and gets stung a few hundred times? Albert converts Rick and Sophie to the Mikayla plan. Oh now Brandon doesn't like Edna's face. That's racist. But now he's too stubborn to do what he actually wants because he said he'd do the stupid thing already. Coach is adamant about keeping Edna and I don't think he could be more obvious that she's his pet. Shark! Poor Cowboy Rick is left between the Coach/Albert Divide. You know what to do Rick, eliminate the anesthesiologist! I heard one of them even killed Michael Jackson.

Tribal Council Time! I just noticed Sophie looks kinda like Elijah Wood. The council's going along, blah blah, then Brandon shakes things up with some drama. I can't tell if it's brilliant or stupid or both. He sure starts yelling quickly over Mikayla. Also, half-lies are not lasciviousness, Brandon, lasciviousness is that feeling that's going to cause you to murder Mikayla.

Voting Time! Albert pleads for Cowboy to do it right. Edna says something catty about a modeling career. 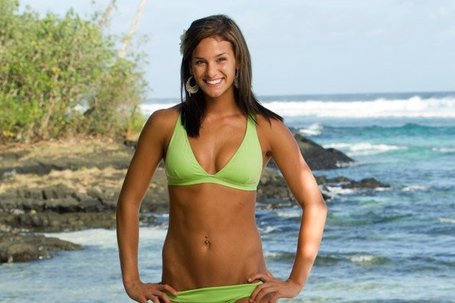 Left boob sticking out, pokey pelvis: I wanted to say something about football but those are distracting me. via www.cbs.com

Next time: Ozzy offers to go to Redemption Island, footage of Coach leading a prayer while talking about shooting Brandon in the head, and Jeff says we're a pair of necks.