Run For Your Lives! Surviving the Zombie Obstacle 5K with Justin Timberlake*

Share All sharing options for: Run For Your Lives! Surviving the Zombie Obstacle 5K with Justin Timberlake* 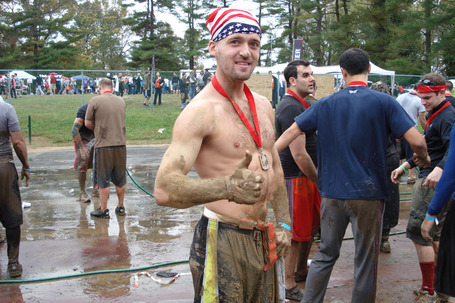 Fellow Uncommoners, I return to you with another adventure that involves running and/or eating. This time around, it would only be running, BUT it would be from running away, from those who wanted to eat my brains (or at least pretended to).

Run For Your Lives! had their first-ever obstacle and zombie 5K run, in Darlington, Maryland, which is about 45 minutes north of Baltimore.  The game's premise was simple: runners wore belts with three flags on them, representing their "health," and they had to run a 3.1 mile obstacle course and try to keep as many flags on as possible.  All while people dressed as zombies were trying to take them away from you. Retaining any flags meant you "survived," and losing all your flags means you "died."

I learned of this event back in July, and I registered at the very start of August.  I'm a fairly active individual who works out almost daily, and I jog regularly.  In preparation for the event, I upped my jogs to twice a day to help build some more stamina.  Needless to say, everything I did to prepare for this event was completely useless, and afterward, well rather, during, I realized just how unprepared I was for this kind of event. 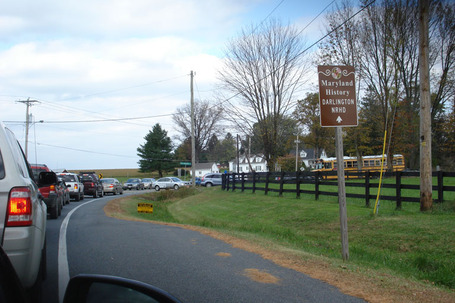 The event boasted the fact that there were just over 10,000 registered participants, but somewhere along the line, they didn't compensate for just how much volume of persons and the subsequent vehicles necessary to arrive to the event.  Needless to say, despite the fact that I deliberately made a trip of the event and stayed at a hotel eight miles from the parking lot and left three hours prior to my scheduled wave, three miles out, my friends and I hit the wall of traffic that will surely be one of the biggest black marks on the event as a whole; I don't partake in social media, meaning I don't have a Facebook or Twitter accounts, so I'm sure to be oblivious to the likely bitch-fest that's going on, on both platforms in regards to the poorly planned logistics. 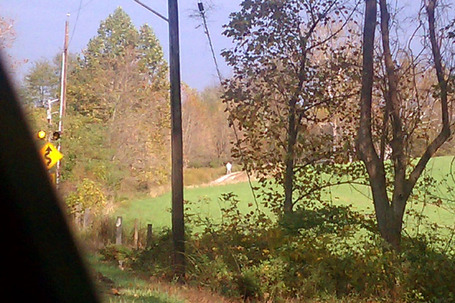 Seriously, we literally went 1.2 miles an hour, and passed the time by counting how many people began ditching their cars and walking to the shuttle bus area, and how many people were getting out of their cars to pee in the wild like this individual who figured he got just enough out of site for the nearby cars to not see him going, but not the line of thousands who could. 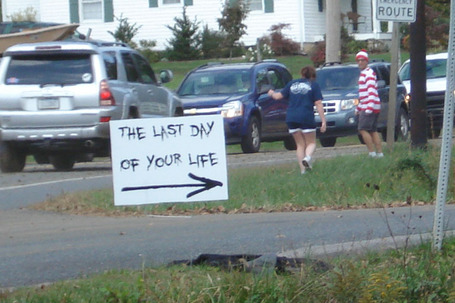 Eventually, we began to see some hope, when we arrived at this intersection where the unluckiest guy on the RFYL staff was doing his best impression of a traffic guard, directing traffic of one-way, country back roads, a half mile away from the parking lot (also note Waldo costumer).  My wave was at 1:00 p.m., but it was evident that there was no way I was going to make it on time.  It was evident that pretty much nobody was going to make their wave on time.  But I paid for it, and I'd come this far, and much like everyone else, damn it, we were going to run from zombies! 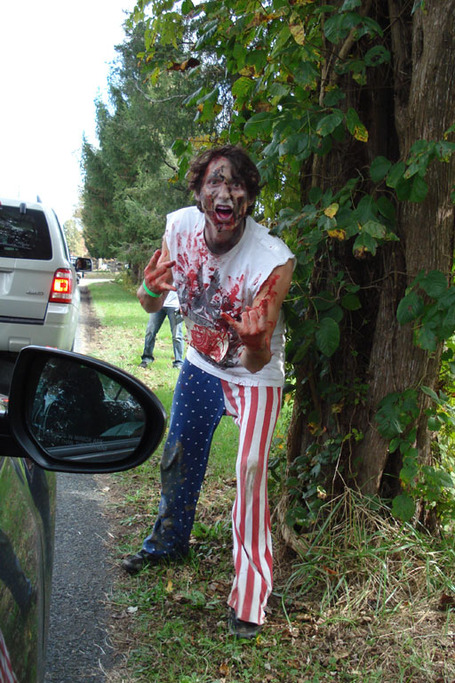 I guess to boost some morale of the endless line of disgruntled motorists, the event trudged out a zombie to walk down the pathway of cars, to give would-be runners and spectators a glimpse of what to expect on the premises.  I stuck my head out the passenger side of my friend's car and called him Apollo regardless of the fact that he was white, but then was admonished for not making a Rex-Kwon-Do reference instead.  Drats. 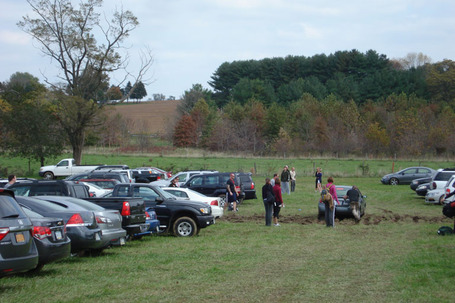 Just when we thought we were out of the woods when we entered the parking lot, it turns out that the parking lot was the parking lot from hell.  It had rained earlier in the week, and in the sticks of Maryland, things weren't quite dry yet.  If peoples' cars weren't getting stuck in the mud, they were bottoming out on the boulders of rocks that were scattered about to drive on.  I saw at least four cars with splash guards ripped off their cars' undercarriages and about six mud-stuck cars.  Bummer for them, but we had a run to take part in. 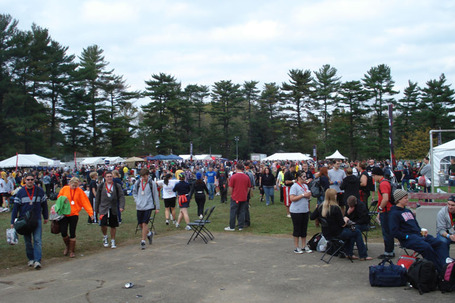 Eventually, we made it to the campgrounds.  There, the atmosphere was jovial and festive, with lots of music, smells of carny food and funnel cakes wafting in the air.  My one friend and I retrieved our race packets and flag belts, and got in line for a wave 90 minutes after our scheduled wave.  Clearly, at this point, the event realized their faux pas, and it became apparent that wave times were relatively irrelevant at this point, as long as people at least got to run.

As much as I would have loved to have taken my camera along with me for the ride, it probably would have broken, or been ruined by mud or water, or possibly flown out of my pocket while evading zombies.  So unfortunately, I have next to no shots of any actual action at all.

Overall, the event itself was a blast.  They boasted 12 obstacles, some man-made, some natural, but to my count, I can only recall eleven.  Regardless, aside from one obstacle which turned out to be a gigantic grade-75 steep hill, that was muddy and slippery, none of the obstacles were really that difficult.  Which is kind of fortunate, because to no surprise, evading the zombies was the most difficult part of the whole experience.

Seriously, if this were any "regular" obstacle run, where you could steadily jog from obstacle to obstacle to regain composure and cool the adrenaline, it wouldn't be so bad.  But Running For Your Life from people dressed as zombies, whose waves were almost perfectly set up at the conclusion of every obstacle made me have to sprint, duck, dodge, dip, dive, dodge and sprint some more, I ended up burning myself out real fast.  Seriously, I have to imagine the only preparation anyone can do for this kind of event is to just do wind sprints and suicides 50 times a day until your body is primed for max effort, and then cool down and then max effort and then cool down again and again.

Anyway, needless to say, I wasn't ready for this kind of exertion.  I can't remember the last time I was so winded and gasping for breath in my entire life.  By the time I finished, I was so relieved, but at the same time, I really, really felt regret for the fact that I had already put down money for the Run For Your Lives event in my home of Georgia in March of 2012 - I really felt like I didn't want to do this again!

How did I do?  Somehow, I managed to "survive" the event, since when I crossed the finish line, I had two flags left.  I was surprised I had two, since I was sure I had lost two in the same wave after this muddy maze of bales of hay, with several aggressive zombies waiting at the end of it, chasing me to the far borders of the course, and stealing one of my flags.  Apparently, the second one managed to stay attached, or slipped out of the grip, but I didn't realize I had it on me until the very end.

So thinking I only had one flag left, I strategically placed it right in front of the family jewels; something that pretty much everyone, male or female was doing.  Let's face it, the zombies were still volunteers too, and quite frankly, nobody wants to be accused of falsely grabbing genitalia, so it was a practice many were doing.  Also in light of being defensive, I realized that I could walk for good chunks of the course after passing by a wave, in order to conserve some energy, even at the cost of timing.

As for timing, I ran the whole thing in a little over 38 minutes.  Out of 4600+ "survivors," I placed somewhere in the top 25%, which I guess is a good thing.  But honestly, time is widely irrelevant in this kind of thing, because just getting to the finish line with any flags at all is pretty accomplishing in its own right. 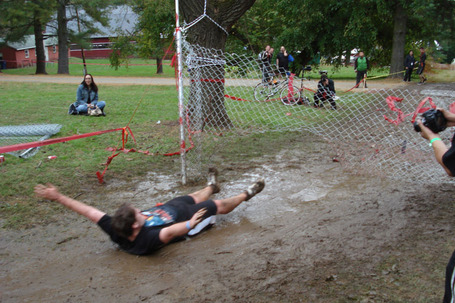 Anyway, after crossing the finish line, I retrieved my camera, and went back to the finish line, because it was frankly the most fun "obstacle" of the event.  What was originally advertised as a fence that needed to be climbed over, it turned out to be a fence with a big hole underneath it, being constantly sprayed with a hose, which meant a great big muddy SLIP AND SLIDEEEEEEE 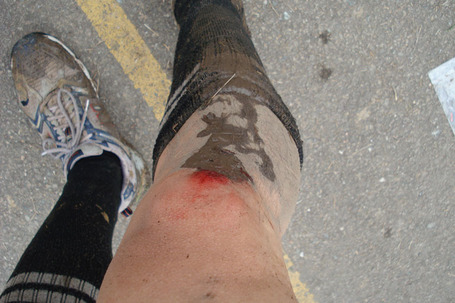 I did a textbook baseball slide into home plate.  But I was also wearing shorts, and regardless of what soft mud there was, I still somehow managed to scrape a bloody mess onto my knee. 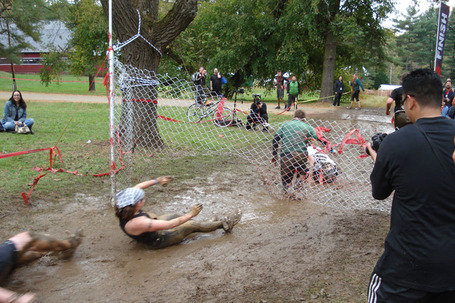 But seriously, it was a ton of fun to finish out the race like that, and I hope all the other ones have such a great finish point as this one did. 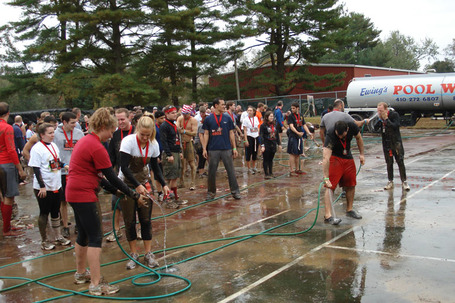 As for the "clean-up" area, it turned out to be three painstakingly long lines of people waiting for hoses to hose themselves off, despite the fact that it was hovering around the mid-40 degree mark at this time of the day. 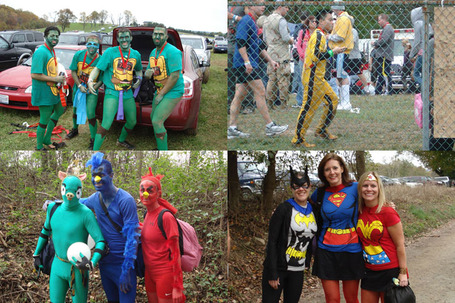 It was cool seeing costumes, like Bruce Lee, DC Superheroines, and the Teenage Mutant Ninja Turtles, but frankly, I have to imagine such attention getting dress is detrimental towards survival.  As I said before, the zombies are still people too, and remaining inconspicuous is one of the greatest assets a runner could have.  That, and being smart and waiting for a wave of runners to show up so you can get in the back and plow through a horde while the zombies are all distracted by others. 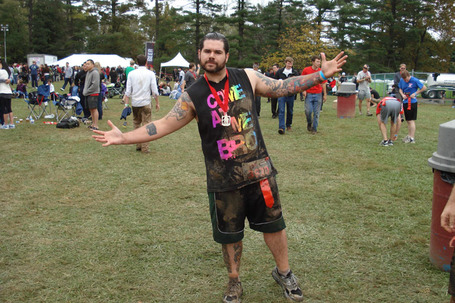 COME AT ME BRO

I really wanted to meet Sal and Richard from The Howard Stern Show, but at this point of the day, it was getting way too cold, and I was still more or less wet from the obstacles and clean-up.  So my friends and I left, despite really wanting to stick around and enjoy the scene a little bit more.

It's a good thing we left too, because the sun was beginning to set, and it occurred to me that there was no way that the event was going to be capable of accommodating every single registrant who signed up to run, because of the traffic, and the monumental push-backs on runners.  I'm glad to hear that refunds are being issued, along with some bonus benefits to those who didn't get to run at all, but it doesn't change the fact that at least 3,000 people tried, lost their time, fuel, and sanity trying to get up to Darlington, only to be turned away, and have to wait for another run.

Personally, I give the event a lot of slack since it was their first ever zombie run, but I really hope they learn from these mistakes, and future ones, like the one I'm doing in March next year, runs a lot smoother, and with less aggravation than this one did.  But for what it's worth, I'm grateful that I got to run at all, and see just a little bit of the event, and personally, I thought it was a blast.  I hope others are capable of getting around the logistics to see the same too. 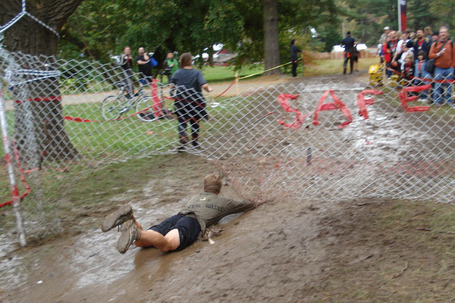 SURVIVAL, baby.  Required a lot of luck, some guile, and a few Calvin Johnson-like head fake-deke maneuvers, but I can proudly say that I ran for my life, and survived the zombie apocalypse.