Previously on UNCOMMON SURVIVOR: Ozzy tested the free agent market, Christine broke down, and the word "meltdown" was used to describe Brandon at Tribal Council. In fact, the words "third" and "meltdown" were in the same sentence. With three data points, we've got enough to make a graph. What do you guys like, pies or bars?

Jeff forgot his tout.com password for awhile and I was kinda glad. First of all, I distrust this touting because it sounds arrogant. I'm also afraid of every fifth new thing that comes along, on principle, and tout drew that straw. Secondly, he (and you) should be using a password manager for all his passwording needs. I recommend 1Password from AgileBits. It runs on pretty much every platform, but I especially love the iPhone app. It syncs over Wi-Fi or through DropBox, people. Jeff could have used that. Later, he remembered his credentials and touted everything from "Brandon annoying" to "Ever beat up?"

Disclosure: I'm plugging 1Password 'cause it's super neat, not 'cause they've given me anything. They don't even know we're here. Sponsors... as if, girlfriends. You make me laugh.

Upolu is still aflutter after Brandon's most recent core reactor damage event. Coach's suit jacket in the night vision makes him look really scary. Coach also thinks it might be time to shoot Brandon like he's a rabid dog.

Redemption Island Time! Puzzle Plank Bridge Puzzle Do Or Die Duel! This one wasn't very close. Christine takes an early lead and extends it. Mikayla is eliminated despite a lot of help from Albert. Ozzy and Cochran smile smugly during the challenge and applaud Christine when she finishes; phonies. The whole thing sucked and they made Mikayla cry. I want my money back.

Ozzy and Cochran seize the opportunity to join forces, after all, they're on the same tribe and all. Ozzy's basically volunteering to go to Redemption in the event they lose the coming challenge. These are the kind of bold moves that can really spice up your nachos. Cochran loves any plan where he gets to stay.

Coach leads himself and the cameraman in prayer. He even throws in some Wayne's World. I bet you God cracked up at that. Schwing! Classic times. An eagle cries, a pan flute pans... it's magic. Oh, another prayer. Why not, it's only been two minutes. Sophie's uncomfortable about Coach praying for God to help them find the idol because it's in his pocket. I, for one, am absolutely tickled by it. It gets better when Coach uses this opportunity to pretend he and Sophie found the idol while getting Tree Mail. That, friends, is the magic of prayer.

Tribal Challenge oh my god Upolu painted on bikinis. The reward? Be forced to sit through Jack and Jill, Adam Sandler's latest crime against the art of film. That's so much worse than the Gulliver's Travels reward from the past. I'd beg to watch that again. Okay, this is one of those "screaming teammate" challenges with the blindfolding and the many, many humorous injuries. So... why did the tree mail request that pairs look identical? That was for no reason, wasn't it? Jim's got a real set of lungs on him. Are we 100% sure he doesn't use his product? Coach blurts out a prayer mid-challenge, offer God the hansom reward of them all falling to their knees to worship him. Yes, God's up in the ionosphere listening to prayers and Coach finally sweetened the deal enough for God to change the course of the challenge. And you all saw it, the deal was done. The fanatics throw down a frenetic prayer before doing anything else, Coach thinking they would all burst into flame if they didn't. Ozzy, on the other hand, just got trolled hardcore by the Creator. He's really pissed off, too. He must have been a huge Sandler fan. Cochran wants to cry because Ozzy's violence means their partnership is over.

Speaking of huge Sandler fans, Coach is all about it. He loved the movie because it had a message: family comes first, which he think they'll all need to remember in the coming days when... well, he doesn't exactly say how he and the tribe, who aren't his family (or him in a fat drag suit), are going to make that work.

The Ozzy to Redemption plan is indeed out as Ozzy decides they must make the decision of who to vote out right here and now while nobody is thinking rationally. He doesn't want to say Cochran blew it and he should leave, but he says it anyway. The about-face where it goes from defecating all over Cochran to telling him they all believe in him is so abrupt that I actually burst out laughing, but of course it's helped with Ozzy telling us that it's riskier for him to be at Redemption than it is for Cochran. Even Cochran comments on their weird confirmation of voting him out, calling it a Kumbayah moment. Did you know that Cochran calls every woman he doesn't like "a stupid bitch?" Wonder why that is...

The next morning, Ozzy has had some "crazy dreams" that involved him "doing what he said he would do." Crazy dream, right? Ozzy may be feeling clear, but none of the other players like it. What is with Keith's compass tattoo? Does he just like cartography a lot?

Tribal Council Time! So, Ozzy had a vision about the Merge. Is this achieving Coach levels of delusion? He's so very detailed, though, he's got the story to feed Christine and everything. If Survivor ever goes scripted, Ozzy's writing at least two episodes, k? Cochran's heart nearly shatters when Ozzy tells him he changed his mind. Detailed secret plot and jokes? You guys, where has this Ozzy been? I want a vision like that. 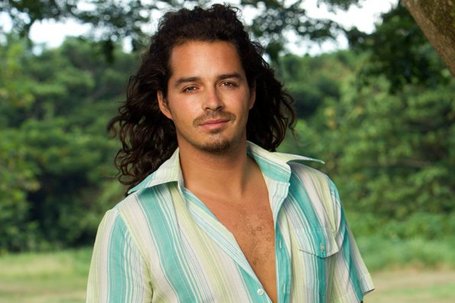