Previously on UNCOMMON SURVIVOR: Brandon's descent into madness continues at a rate that is distorted by three days being condensed into 42 minutes then aired once a week. In other news, nerds everywhere can rejoice that old people are more of a liability than we are.

Ozzy and Elyse, swinging in a tree... sing along, everybody!

Another protip for nerds: Make the stronger men fight about the hot women in your tribe. Offering to dress in island drag is not recommended, however.

Brandon is trying to turn over a new leaf but all he's doing is serving up awkward cake.

Jim is super-scared he and Cochran will be caught "talking strategy" together. I'm getting a weird feeling about Jim.

Elimination Challenge Time! Woohoo! Sack Toss! What a battle that was. The age-old question of who is better at Sack Toss; an old gay man or an experienced woman, will have to wait for further tests.

Edna is trying really hard to be everybody's friend. You know, in that way that people do when you don't want to be their friend. Then you hate everything they do and say... even their laugh. I laughed myself when Coach asked her to walk on his back: what a jerk. Only one nice to him, not in the alliance.

Cochran's sorta fumbling his way to making a move to get rid of Elyse. It's like watching a baby bird learn to fly.

Immunity Challenge Time! Poles of Pain! Wait a minute, who is Albert? Seriously, another walk-on? Dude just shows up and here he is, in a challenge and everything? How does this keep happening? And you know the worst part about it? It's like that other guy from that other season who was just suddenly there, but I can't remember his name because he was so forgettable. It's almost like you forget he's there as soon as you can't see him.

Red Team Keith doesn't know how bodies or this challenge work as he drops out quickly for trying to shoulder his load on the strength of his arms. It's called "shouldering," buddy! Albert drops out attempting the record. Jim falls when he exceeds the previous record of 220 lbs, but he can't handle the load and drops. Brandon goes into murder-beast mode but the weight isn't a Jezebel, so he cannot defeat it. Only Dawn and "Boom Blam Ka-blammo" Stacy remain. They both look like they're going to blow an O-ring. Dawn looked like she was going to break first, but somehow manages to hang on until Stacy drops her Pain Pole. Red team wins two hens and a rooster.

Coach has a pretty good loser speech for the tribe when Blue gets back to camp. Edna is nervous and it annoys Stacy because she stood with over a hundred pounds on her shoulders, and is therefore superior, as far as I can guess. I have a sneaking suspicion that Stacy also doesn't know what scrambled eggs are. Culinary note: kids, if you're scrambling your eggs in a skillet, you are doing it wrong. I very much appreciate Stacy's attempts to explain urban vernacular to our prime time home audience. What if her luxury item is a print-edition Urban Dictionary!?

Stacy feeding paranoia to Brandon, who takes it to Coach, who then scolds Brandon for believing it: wasn't that delightful? It's like watching someone discipline their child in public. Daddy is detonating in the chip aisle, folks. Junior is not getting those f*cking Hot Cheetos and Daddy will take him the hell outside right. this. instant. if he doesn't behave.

Tribal Council Time! Too much platitude. So much boring talk that Jeff has to feed them questions that might stir up a controversy. Vote them all out. I have to wonder if anyone would care that Brandon was related to Russell if he hadn't already been a nutcase. Blood is what Mikayla says is in the back of her mind, not the part where he said she was evil because she's hot. Brandon is seriously messed up in the head. Jeff can't even ask him what's bothering him without him crumbling because he's afraid God isn't proud of him. Pride is one of the seven deadly sins, why would God commit one of those?

Edna, Stacy, Stacey, Stacy :(, Stacey, Stacey: Let's all give her a hug, though, right guys? DENIED! Coach wants to cry. 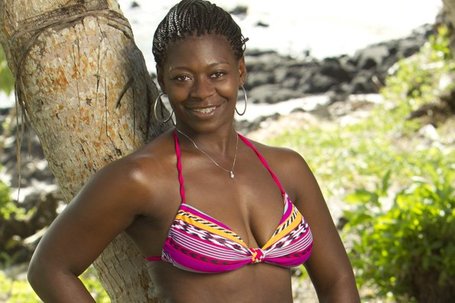 BOOM! DON'T TOUCH ME via www.cbs.com

Next time: Everyone taunts Coach, there's a corpse-eating challenge, and Cochran tries to brag about getting an STD, but we all know that's not happening, right fellas? Up top!