Previously on UNCOMMON SURVIVOR: The merge happened and Cochran flipped life a crazed animal with an inner ear infection. Now he has to take the heat!

I've never been so excited to hear someone get berated. Not even when I'd get my little brother in trouble for doing... anything.

Ozzy's all bummed out that Cochran decided to save his own life, but then he accelerates into full on hatred. Jim tells him to never talk to him again. Yes, Jim, I'm sure that was going through his mind. "Will I ever get to talk to Jim again?"

You know what's perfect? Wearing the symbol of your religion of peace and forgiveness on your chest while you spit on someone who betrayed you. You know how Jesus truly got back at Judas? He was like, "I ain't even mad." Totally lost on Whitney. Jim's anger meter is topping out at "Too Hot for TV" and he really hates nerds. It's like he didn't tease enough nerds until now

Coach is proud he succeeded "against all odds." No. Against odds, sure. Not all of them.

Immunity Challenge Time! This is kinda early. Multi-heat coconut beat and eat! Okay it's drink, but that didn't rhyme. Jim, Sophie, Dawn, and Whitney advance. From here the game becomes Who is the Best at Holding Fluid in Their Mouth, and out of Jim and the three women, didn't you know who it was going to be?

The new plan is to eliminate Ozzy. Brandon's reasoning takes the form of asking Cochran how many times he'll get to vote out Ozzy in the game, thinking the answer will, of course, be one. This one. Cochran jokes "twice, apparently" and, I can't tell you how long it was in real time, but it was an eternity in my mind, Brandon takes quite awhile to realize what Cochran's said. That's the true torture of Survivor for people like me; stuck on an island where nobody gets your witty quips.

Ozzy humbles himself before Coach's glory and Coach couldn't be prouder. They share a hug before Coach sends him on his way, telling him he'll be back. Is that what hell is?

Jim and Whitney share a Cochran hate session. Jim still seems to think he's the most hated survivor left. I guess that's why they call it blinding hatred. Jim decides to throw his necklace down for Ozzy and plead that the others vote out Cochran. The guy has been smoking his own product.

Tribal Council Time! Okay, this is way early. Cochran lays out what his past couple nights have been like. Cochran's justification is perfectly logical, especially in the scope of the entire game. Everyone eventually makes the move that saves themselves. To Jim, this is cowardly... at least at this stage of the game, and for him. He makes a grand speech about determining for all of Survivor that dishonesty will be punished and then starts speaking the words that make Coach's loins stir: honor and warrior. Ozzy vows to get back at them all from Redemption, but only after he's served them a nice meal. Jim keeps the necklace after all his bold talk. Coward.

Keith and Ozzy get to bro it up together yet again! Ozzy explores the reed and pulls out some large reef-dwellers.

Another Immunity Challenge?! Beam Ball Balance! Jeff offers a table full of carbs to anyone who doesn't think they need to earn Immunity today. All of the Suvaii tribe competes and all of the others eat, including Cochran. Jim drops out before anyone can finish a single pastry. Dawn is pretending to give a damn about the people gorging themselves in front of her. You'll never convince me she isn't trying to curry favor. Eventually Whitney prevails and that sucks, I'd rather she be gone than Jim. Albert isn't a fan of being nice to Dawn. Good Albert.

Cochran, for some reason, is strolling around in Coach's jacket and Rick's hat. Jim sarcastically appreciates Cochran's eventual third place finish, but it's better than he's got, and people have won by being the third best before.

Albert is alerted to Dawn's niceness. She's just too nice. I agree with him, gotta get rid of her before Jim. Sophie thinks Albert's thinking too much, but he's right on the pulse! Coach even buys in to it with an animal kingdom analogy. These are the things that sway Coach: nature documentaries, Asian stuff, and war. Not real war, though, figurative war. Never once heard Coach talk about guns or UAVs or anything like that.

Second Tribal Council Time! Pretty straightforward Tribal until Dawn says it was hard for her to watch them eat and Brandon can't reconcile that part. Has he ever had to do something he didn't want to do? Brandon tries to twist this into some example into how his tribe is better than theirs, which makes Whitney cry. She's not a bully, you guys! Wonder if she still thinks that after watching tonight. 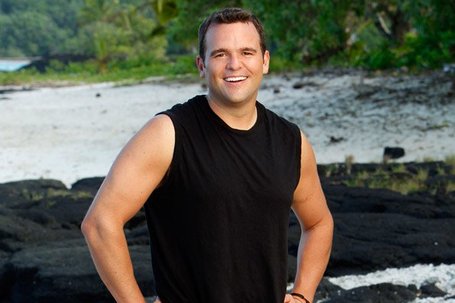 Do you think they photoshopped out all the Ed Hardy? via www.cbs.com

Next Time: Albert plans to make his move, Coach is going all Godfather, and Ozzy is preparing to go Super Saiyan.