Previously on UNCOMMON SURVIVOR: Honest, I forget. All I can remember is that everyone hates Cochran, except Coach, who has him believing he's the strongest man on the island. Is there some natural hallucinogen that grows out there?

Every week the blog thingy (technical term) asks me what league I'm writing about so it can look for player names to auto-link to a handy-dandy stats page. Secretly, I've been writing about the NBA. I was the only one on SBNation doing it (that I know of, I didn't bother to verify this). Since everyone (presumably) is writing their NBA stories again, I have to move to FIFA World Cup because it's not for like two years. I hope I don't accidentally type Ronaldo.

The revelation that Cochran wanted to trade sperm is a shock to only his mother.

I think Sophie is the only person who actually sees Cochran clearly. Not as a competitor, but an obnoxious little jerk.

Another fascinating peek into Cochran's psyche: he hears "family" a lot and he starts thinking about the Manson family. This paranoia pays off though, along with thousands of years of evolution. He notices Brandon might be murderously crazy and wants to stay away from him.

Cochran calls a meeting with everyone but Edna to ask them to pay him back for when he screwed himself with another few days on the island. And it's his birthday. How could you do that to him on his birthday? If he tries to get naked like Richard Hatch, so help me. I think it's an asinine move, both to propose and to consider, but Coach and Albert seem to buy it. Whatever works, I guess.

Redemption Challenge Time! Extreme Endurance Busing! (of tables, not the racist kind of busing, you guys.) Dawn makes the least viable waitress when her stack of plates falls. Whitney makes the second-least viable waitress, which makes Ozzie the best waitress and eligible for a guest spot on 2 Broke Girls. Congrats, duder! Dawn is kinda delirious after it all. Whitney says everyone's going to be proud of her when she gets home; her family, her friends. Secret husband? Not so much, I'm guessing.

Ozzie is going into full savage mode. He's just fishing and eating and growing copious amounts of hair out of his face. Hopefully that's what my retirement is like.

Albert's got the game figured out. He's strong enough to win a challenge (I guess) so he doesn't have to look busy around camp. Edna, on the other hand, is running the laundromat. It's too on the nose, guys.

Cochran is glad that he can contribute to the team by being a holder of dead fish. It's still a harrowing experience for him, because nothing isn't.

Albert breaks the cardinal rule of being a layabout: getting noticed. In one fell swoop, he disrupts Edna's laundromat and puts out the fire. Then we're hit with audio of everyone saying Albert does nothing. Rick remarks that that is why they call him Prince Albert. Nobody has ever called him that in any broadcast footage. This is something I would have remembered because I know a lot about penis piercings.

Coach and Edna sit together on the beach while she asks him who's getting voted out next. Coach manages to stammer out a "yes" to the question of if Cochran's getting voted out next. You see, Coach was left with a dilemma: Continue playing the as a man of integrity (LOL), or don't, or something not included with those first two options. Something.

Coach isn't here to win Survivor, it's actually just about being someone's coach in fake tai chi. Tai chi, if you didn't know, has the same health benefits as restless legs syndrome, therefore Coach deduces that either one of them will now win this next challenge.

Immunity Challenge Time! Just like when I don't do my own laundry for too long, this challenge is called Recycle for Survival. As someone who took Physics twice in high school, I can tell you that the secret to this first phase is getting a good arc on your bag. You can try to hit the back lip of the crate, but that's probably too difficult to do. The next phase is Island Dennis the Menace. Rick starts off fast but Albert's long sessions of R&R give him the endurance to win. With his spoils, some crappy massage, he chooses Coach to go with him, but gives up his spot to Cochran, since it's his birthday. I like the move; if I could gain some easy social points and get two people to give me food later, I make that move all day.

Oh, and it's not Cochran's birthday any time soon. You knew that was too convenient, right?

Cochran and Albert go off to compare notes and count votes. Cochran is sure Coach would vote off Rick, who's been calling you, me, and all of our dads Princess. I love when people are informed that someone's been calling them names. I'm surprised that tactic isn't used more. Albert is never going to ask Rick if he's been calling him Princess. Cochran plays the whole thing smoothly, securing Edna's vote, too, before bring it to Coach. When he does, Coach sits there dumbfounded for what seems like a full minute. "Coach, you idiot, you can't beat anyone in challenges, and Rick almost won this last one, take the opportunity, you [expletive deleted]" I yelled at the screen. Coach mangled that Shakespeare quote, too. It's real, but it's really mangled, too.

Tribal Council Time! The jury enters. Whitney's got JBF glow. The news of schemes is truly news to about half the people there. Everyone in the know does their best to not tip off what happened. Brandon, frustrated that he has no idea what's going on, tells everyone who he's voting for and announces that everything is black and white. The Trolley Problem would seriously blow his head apart. After announcing who he's voting for, Brandon seems extremely proud that he's correctly identified the difference between black and white, that is until Jeff explains that this means Brandon is actually a liability. When he realizes he's exposed himself as an idiot, he begins to cry and talk about the evil things inside him (I assume magically, not biologically). Cochran cuts to the chase by essentially saying Brandon is too dumb to think about strategy, and everyone agrees. Fortunately, I think he's too dumb to notice, because I think he'd have tried to throw someone into the fire by now. Jeff insists that this is a very revealing tribal, but I think that's only because it is to him. 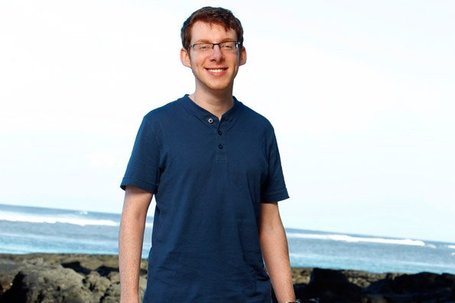 Next time: Honor and integrity come back to bite everyone and Ozzie lies to Cochran to get him into bed.