Previously on UNCOMMON SURVIVOR; Brandon spills the beans all effin' over the place. Beans here, beans there. Bean there, done that. As I think of words to describe Brandon, I can't help but think of the words of Hank Hill, "That boy ain't right."

I had to watch live network television this week because my local Hand Egg squadron played a live event last Monday, but it afforded me the opportunity of seeing the promos for this week's episode, where they announced that Brandon's dad shows up. That either means there's been a severe breach of Survivor protocol, or this is the Relatives Episode. Get your tissues ready, boys. When ya comin' home son, I don't know when. Momma, I'm comin' home. MASH 'EM UP!

Cochran tries to sneak up on Ozzy like Bugs Bunny in a dress. He's also pretty burned at Upolo for not paying him back and Ozzy assuming he's already eliminated.

Eww, all those flies. Is that crab going to be okay? Brandon calls the tribe over for the morning prayer and Edna walks off, saying she's not part of the tribe. Then she goes and stands by herself. Weird part about it is her pantsuit is immaculate. Day 30, people. Immaculate pantsuit in the jungle. Girl can do some laundry. And then they pray without her!

Just as Edna is nailing Coach to the cross, Brandon comes shouting back about the Sprint tree mail. Lucky bastard. The videos play. I'm sure Sophie's dad meant well, but him saying he wasn't sure she was going to make it this far is kinda dick, right? Brandon seems to think prerecorded videos are live two-way exchanges as he answers his father's orders with a "sir."

I took a snap of Jeff's shirt. This might become A Thing. I call it "Hey, Look at Jeff's Shirt." 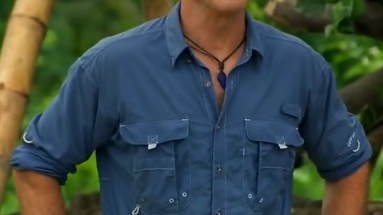 On with it. Wow, cartoon sound effects for Cochran's mishaps. I was just beginning to think it couldn't be any more embarrassing for him. Clearly, I've learned nothing in our time spent with him. That was probably the closest challenge I've ever seen. The ball rolling right off the rim? Unreal. I mean, real, but you know. Table-a-MazeBalls reminds me of a video game, maybe that's why Cochran did so well.

Jeff calls the family members out. Ozzy gets to pick three and take them back to his Wild Man Lair. After everyone gushes over the phone, Coach seizes the opportunity to pitch his plan to go to the end with Ozzy, giving him his promise as a Christian man. What was his brother doing during this time? Come to think of it, was that really even his brother? Brandon's dad, meanwhile, is super-glad to have shown up to intervene, because crazy-ass Brandon apparently forgot that his holy mission is to win a million dollars for his father, not be a poor Jesus freak. He swears his son's fealty to Coach, but Coach feels it's coming on too strong. Also, Brandon's too nutty.

Immunity Challenge Time! Giant Pineapple Game Where You Can't Run Out of Moves! Someone help with this, this game has a name in regular board size, I just have no idea what it is. Anyway, "Hey, Look at Jeff's Shirt" miming Coach's Dragon Slayer move. 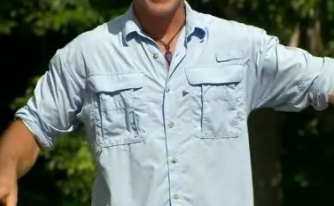 Brandon's strategy, aside from eliminating himself, was to corner Edna. It seemed like everyone else did that to themselves, too, but this was especially insulting to her. Coach wins. Edna's mad that she's on the way out, but Brandon seems oblivious to the fact that they're going to have to vote each other off between now and the end.

Back at camp, Edna's still pissed about the way Brandon treated her. He clearly doesn't understand that what he did was rude and once he trots out an apology, he feels his job is done. Edna rallies the rest of the tribe, minus Rick, and tells them all in a clear and complete way how Brandon sucks and they should keep her. That's the kinda stuff they never taught Cochran at Harvard Law. Later, Edna has just Coach by himself. Her conviction is so intense, the Dragon Slayer himself almost begins to cry. It's sad having to Old Yeller your most loyal dog. Listen to that piano music, too. 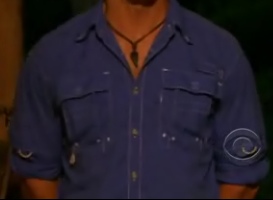 Voting Time! Edna, Brandon, Edna, Edna, Edna. THEY ARE THE ONES WHO ARE THE JERKS! 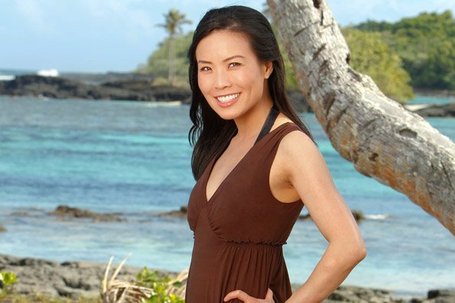 "I didn't bring any weight to lose." via www.cbs.com

Next time: Honor and Integrity explodes all over everyone's face. And... Edna beats Ozzy?