Welcome back, everyone, to UNCOMMON SURVIVOR! This season is all about taking the rage jbox has expressed in the past and doing the thing that would annoy him most; directing it back at him by making Boston Rob a central part of the season. It's like the casting director and Jeff Probst himself were reading our comments sections two seasons back and thinking to themselves, "We've got to take that jbox down a peg or two. You know what would really get his goat? Making Boston Rob a central part of a coming season." Then they did fist bumps and made explosion noises with their mouths while they opened their hands.

This season offers a "new" twist; Redemption Island. The survivors will now enter a sort of Purgatory before being made to leave, where they will duel someone and fight demons, just like Dante of Inferno fame. If this is your first time here, you have to comment, otherwise we're all going to be friends and you'll feel excluded. The inside jokes are going to be hilarious, so I assure you, you want to get in on the ground floor of this. Don't spend another day on the outside when you can spend them all on the inside.

They open with a scene of Jeff flaunting his alliance with the Guild of Helicopters. We already have a secret agent (question mark), a dude who's trying to be Jesus, and a farmer. The helicopter lands and drops everyone off on a beach, then it roars away, probably to attack some video game protagonist. Jeff calls in another one of his evil helicopter friends, and this one delivers Boston Rob; who is greeted by cheers, and Russell; who is met with a mix of dread and cheers.

Jeff introduces them both to the others. Francesca, a bald girl, says she feels like she's being sized up, like she's prey. Jeff has two leaders choose buffs; Boston Rob chooses an orange color, leaving Russell with purple. Jeff refers to this as "old school," which goes back to the 19th century practice of drawing tube tops out of a burlap sack. From here, the two take their places with their new tribes while Jeff explains the final twist: Redemption Island.

Each tribe heads off on their way to find their camps. At Purpletown, Russell is glad to be back, and he's ready to be Russell again. He addresses the group, saying it would be dumb for him to try to betray anyone. They begin to plan to build a shelter with their Craftsman tool set. Ralph, the farmer, is giddy about getting to build a fort. Mike, the Iraq War Veteran, tells Ralph he loves his man sweater. Things look to be progressing nicely as almost everyone is working together to build a rather impressive structure.

Over in Orange County, Boston Rob is taking a very hands-on approach to the shelter. Everyone is so thankful to have him, they can't stop gushing over him. Someone, I think Matt the Disciple, asks him if he's really from Boston. Francesca, an attorney, struggles to dig up a root with a shovel, only she's wearing sandals. Phillip watches her pitiful struggle before telling her to move and shows her how it's done. She rolls her eyes and walks away. Phillip is identified as the most annoying person so far. I can see what they mean, he keeps going around to make sure nobody is going to maim themselves with their awful techniques; the nerve. Then he gathers all the women around to tell them all he's a federal agent, so you can trust everything he says, because he's from the government. He's also an expert lie detector and he loves women. I'm already imagining a buddy action flick starring Phillip as a secret agent and Coach as... whatever he is.

Kristina, the world's oldest law student, is searching around the camp for a hidden immunity idol. Boston Rob notices this and tries to get her to go check something far away from there, but she doesn't take the bait. He tells her he's on to her, and an instant gentlemen's agreement is formed. The agreement appears to be Boston Rob helping himself to a search of the equipment in a gentlemanly fashion. Boston Rob and Phillip share a moment of agreement, where they size up the number of women versus themselves and Phillip advertises his desperation to be Boston Rob's friend on a billboard. Phillip tells us he and Boston Rob are lions while making noises and flexing. He takes what Rob said to him to Kristina, saying he's going to play along, but side with the girls, and especially her because she's old. The fools; that ant-eater heard every word.

Back over at Purpletown, Stephanie the Waitress has to go with Russell to find tree mail. She swears to us she hates him, but she's dying to be the next Parvati. Sensing this, Russell tells her she is "that girl." Mike and David, the white knights of purple, swear to not let the evil Russell take another maiden and turn her into a wicked witch. They want him gone as soon as possible.

Suddenly, it's Day 3. Kristina doesn't like how Rob's charming the hen house so she sets off alone in search of an idol. She starts looking for landmarks and eventually finds it under a pile of conspicuously-stacked rocks. She reads the note with it and hides it in a different place. When Rob leads the hens and Jesus Jr. away, Kristina decides to ally up with Phillip and Francesca. If you had "In the first episode" for the First Blurry Body Part pool, you won right here. Rather than just nod and go along with Kristina's plan, Phillip decides now is the time to perform an interrogation on his new friends. This goes so well that it ends with him talking over them both by repeating, "We're done, we're done, we're done," just as the others return from their walk.

Challenge Time! It's a race to insult the gods with a blasphemous pyramid! The tribes begin to push large stone blocks into place to make the first set of stairs, and Purple has enough raw power to give them a full block lead when they finish the leg. Ralph slingblades the ropes in no time to release the next set of stairs and they begin to assemble their pyramid while Orange struggle with their final step block. Orange catches up to Purple as Jeff announces his love of Boston Rob's puzzle skills. Purple's lead all but disappears, but they are organized to pull out the win anyway. Rob looks like he regrets coming back. Russell shoots him a look and pumps the immunity idol, making him regret it even more.

Back at Orange County, Nurse Ashley feels like they let Rob down. While the hens and Jesus Jr. play in the surf, Kristina tells Francesca about her idol. Francesca wants to know how and where, but Kristina isn't giving up any details, only that she didn't need a clue to find it. She plans to honeypot the votes and play her idol to allow the three of them; Phillip included, to vote out Rob. Francesca still thinks they need Rob, so she tries to get Kristina to reconsider. She decides that getting rid of Rob is more for her than the tribe; she's like a bounty hunter. Unfortunately, she's too bold and approaches Rob to ask him who they're voting for. From there, he explains that, at first, he was worried about Francesca, but now it's Kristina. Rob tells the hens and they cluck along in agreement. He figures she probably already has an idol, so they should split their vote. He gets them each to announce who they're voting for and tells them to stick to that plan.

On the other side of this alliance, Phillip explains to Kristina that he was in a heightened state of arousal. I'm sure. Then he immediately begins his interrogation where he last left off. She leads him off to show him the idol and gives him the remedial course on how it works. She tells us she doesn't trust him, but tells him she's on his side. To seal the deal, Phillip is sure to ask for another hug. Phillip loves women alright. Before they leave, he predicts Rob will be leaving and proclaims himself the new leader of the tribe. I can already tell this is going to go swimmingly for him.

Tribal Council time! Everyone steps in and Jeff has them light their torches. Jeff begins asking Rob how everything went and trying to get Phillip to say he's the leader of the tribe. From there, Jeff asks Francesca how Redemption Island can change the game and she starts to answer with a hypothetical, "if Rob were voted out, he's not going to," but Phillip has to interject. Why, you may ask? To sell out the members of his alliance! Francesca denies this and keeps talking, but he thinks it's his turn to talk only. Everyone is a little taken aback by his tone, even Jeff. From there, Phillip lets his big secret federal agent career become not a secret to anyone anymore in a heartbeat. Kristina tries to tell him that he needs to tone it down, but he's not done forcing all secrets into extinction. He tells everyone the reason they came to him in the first place; because they have an idol. Everyone is shocked. Phillip also seemed to be suffering from shock because he can't pronounce Francesca's name anymore. Rob asks them if what Phillip says is true, and Phillip uses this to turn the allegation of instability back on Kristina. Jeff just sits back and smiles, enjoying the chaos. Rob asks Kristina for the idol and tells her to let him keep it and he'll let her stay. She decides to keep it, but now she's a target.

Voting begins. Rob brags about his career as a reality show contestant, calling the others "amateurs" while voting for Francesca. Francesca votes for Phillip, saying she changed her mind and it spared Natalie. Jeff gathers the votes and asks for any idols. Kristina decides to hang on to it. 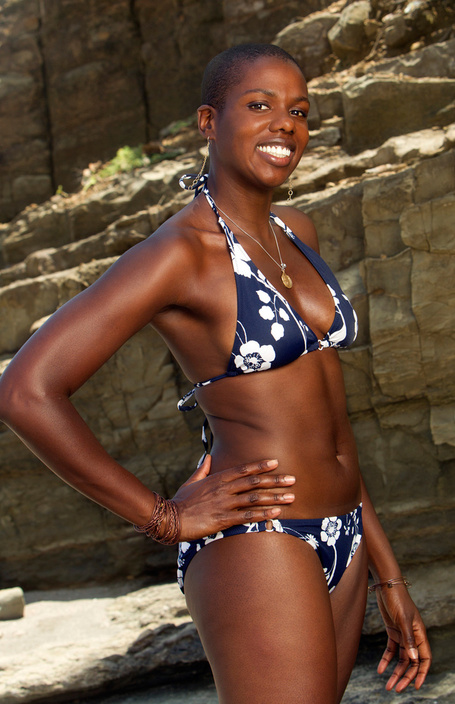 Next time there will undoubtedly be a Redemption match and Russell and Ralph are going to fight over who is the manliest southerner.