Share All sharing options for: Another Failed Food Challenge - The Brion's Burger Challenge 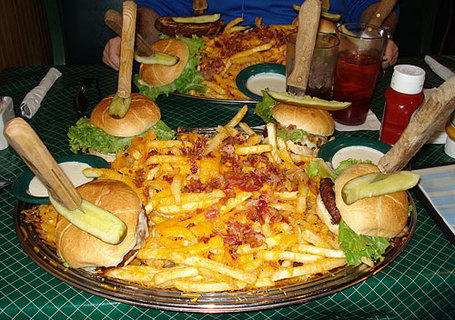 It may have been a long, long time, since my last participation over here, but I have never forgotten you guys.  Long have I lurked in the background, ranging from mortified, jubilant, to simply amused by the litany of links and stories provided by Axion and company on a somewhat regular basis.  Guilty, was I, knowing that I was not contributing in any regular capacity, since my biggest contributions in the past involved eating a lot of food, running, or a combination of both.  The last few runs I have participated in were not of the Uncommon variety, and were in fact, quite vanilla, as in each of them, someone from Zimbabwe or Kenya finished in less than a third of the time I needed to finish such.

But eating a lot of food, that's something I'm always seeking out.  Life for royhobbs has been fairly sporadic throughout the last few months/years, and my ability to travel and seek out food challenges as well as baseball parks has been slightly stunted.  The Krispy Kreme Challenge that I have been synonymous for running and reporting on, I regret that I had to bow out of this year, due to disinterest, prior engagements, or whatever reason existed.  But it is moot, because without question, had I run in it again, it would have resulted in success.  Easy success is not what makes food challenges interesting - instead, it is the threat of failure, and challenging the odds.

So without further ado, I bring you a story from my latest foodie adventures - Attempting to take down the Burger Challenge, brought to you by Brion's Grille, in Fairfax, Virginia.

I grew up near this place for at least 13 years of my life, but apparently this is more of a recent development.  Supposedly from the intel I was given, only one man has completed this daunting task.  What is this task, you might be wondering?

your choice of 4 of our 10 burgers, piled high with toppings and served with an enormous pile of cheese fries. ask your server for details. time limit: none, but if you finish within 45 minutes, the challenge is free - 40

I do like me hamburgers, and in the past, tackled a 1 lb. hamburger with relative ease, so I figured that four hamburgers around a 1/4 lb each shouldn't be an issue.  Throw in an appetizer of fries, and we have a free meal.

Apparently, I didn't question the definition of "enormous" based on a piddly menu description.

So when this troth of food arrived at the table, the only words in my head were simply "o (crap)," but I dared not verbalize them right then and there, and let those around me know that I felt that I was waaay in over my head with this challenge.

I really wish that I could put a strike-through in the title, and simply call this "The FRIES Challenge with a side of Hamburgers" because that's simply what it really is.

It's like you only need a can of Raid and a garden hose to get rid of some pesky ants, but instead, bringing the Hummer H3, and repeatedly running over the anthill until you've created a ditch.  The fries were such an overkill to what was already a fairly competitive challenge, that it actually gets in your head that the challenge itself is insurmountable. 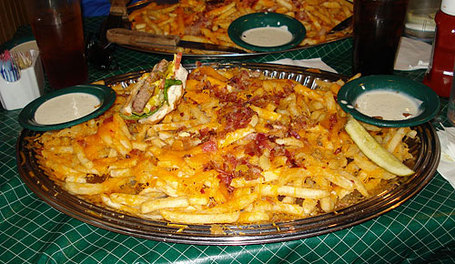 Longer story short, I failed.  I failed miserably.  My friend failed even worse.

Don't be fooled by the image - I ate a TON of fries.  If I had to guess, there was probably ten potatoes worth of lard-fried french fries, slathered in cheese and bacon.  I'm fairly confident that I could have eaten all four hamburgers in the 45 minute allotted time, but the constant presence of the fries, all  starting at me, goading me into reminding me that they too, must be consumed for total victory, planted the seeds, four layers deep, that I simply could not complete. 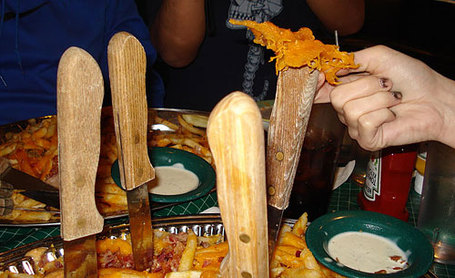 Towards the end too, the cheese began to get hard, and less-appetizing.  The waitresses warned us of such peril, and reasoned why the fries should be eaten steadily along with the burgers.  The best way to describe it is that the cheese ended up looking like the alien symbiote that latched onto Peter Parker, turning him into the black Spiderman, and eventually hooked onto Topher Grace Eddie Brock, turning him into Venom.  Yeah, the cheese symbiote. 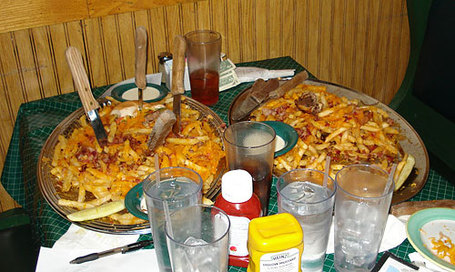 So let the record show that in my 45 minutes, I consumed three and 3/5th of the four burgers, and barely put a dent in the "enormous fries."  Regardless of such semantics, it simply ends up as failure.

Don't be fooled by the slightly emptier troth on the right - two of my additional friends showed up, and since he officially threw in the towel one and 4/5th burgers through, they feasted on the remaining two burgers.

The funny thing is that anyone would imagine that after such an experience, the last thing I'd want to eat would be more hamburgers, but after I came back to Atlanta after my trip, I found myself craving hamburgers again, and my friends and I fired up the grill and feasted again.  It's like this failed challenge left an impression and poor association with burgers and failure, that I had to rectify such thoughts by having a more appropriately portioned, satisfying hamburger meal.  With no ENORMOUS FRIES.

Thanks for reading, as always, and until the next food failure comes along, I'll be seeing you guys.