Last time on UNCOMMON SURVIVOR: The unthinkable happened. Mighty Russell was voted out to Redemption Island after his tribe intentionally threw the challenge. I hope throwing the challenge comes back to bite them. That kind of move reeks of the quitterdom that soured last season.

Survivor was renewed, with Jeff as the host, for another two seasons, so it looks like my sentence will be extended through 2012. Speaking of prison, my captors have installed a new device that counts words as I write them, so I can slowly track my progress like a pedometer of insanity.

Russell gets to Redemption Island and, instead of finding a sleeping Francesca, finds Matt sleeping in the shelter. I guess what's-his-name's lie worked, because Russell admits that it sucks to find Matt here instead. He gets all vowy because he's so mad he wants to slap his former tribemates as if they were dogs or women, I'm not sure which he meant.

Ometepe is greeted the next morning by Phillip sweeping the dirt. The tribe finally wakes up to stare at his junk through his deteriorating pink man panties. They're at the point where CBS can only show us pink blurs because, as Boston Rob put it, it's not only disturbing, it's disgusting. Penises are not show dogs.

Stephanie and Krista aren't having any fun and have nothing to do but make prophecies about Russell's return. Sensing that his Wookiee pelt was starting to drive the others away, Ralph showed them his Immunity Idol. Sarita the mystery woman kissed him on the face.

Phillip starts the next day by annoying everyone with reading the tree mail aloud while they're still sleeping. They're happy to send him away and he's happy to go because he's a secret agent. Sarita wants to go because seeing Russell is will be worth almost all the money to her. Don't give her the money, she doesn't know the value.

Redemption Island Time! Ugh, I'm not fan of domino rally challenges. Every one is the same. Build a line, tip it, rebuild it, tip it, over and over. What saves it this time is the combination of Russell breaking down after losing, calling out Ralph and Sarita, and goading Ralph into saying he has an idol and getting nailed by Phillip's insatiable hunger for information and detecting lies. Second to this was Ralph and Sarita cheering when Russell lost, only to have him cry and make them feel like assholes.

Lessons learned from Boston Rob finding a hidden idol: Bowel excuses can get you anything. The only disappointing thing is that he wasn't discovered by the others all sweaty and red while carrying the shovel.

When Sarita and Ralph return, they admit they felt like assholes. I like that Stephanie isn't afraid to speak out when the others say dumb things. Normally people just lay about and get all depressed and make a whimper before they're voted off and that is just the worst.

If you had any high hopes for Russell's information making its way to Rob without issue, you can forget it, because Phillip is personally handling that responsibility. The secret agent over-valued his bargaining chip and then gave up the information when he realized it was nearly worthless. Perfect Phillip.

Immunity Challenge Time! I guess a Craftsman Tool-off isn't the worst way to implement product placement, is it? One surprising thing, Boston Rob isn't half bad with a hatchet for a city dude, too bad Phillip was hopeless with a saw. Zapatera's reward feast made me want to buy a grill.

Phillip comes back and cranks up his annoyance factor to the max. Not even the crickets had anything to say after his post-loss speech. My favorite part was when he ended it with, "Let's get to it," like he had just given orders. And why does Kristina have to act all batty right when she's finally got her sexy right? If it's me, I'm looking at it like this; Kristina's luscious globes or another morning with Phillip's pink panties?

Tribal Council Time! All of Phillip's lobbying for Kristina went up in smoke pretty quickly when he blindly nails a compelling speech about his trustworthiness. It's the perfect plan for those in charge, keep the disenfranchised fighting amongst themselves. Phillip also has his own brand of stamp, named after him, the Shepherd Stamp. I wonder if that's ruining Mass Effect for anyone.

Jeff admitted yesterday that he arranges the votes for drama. I can't remember if I already knew that or not, but now the magic is gone from listing the votes. Here's your picture: 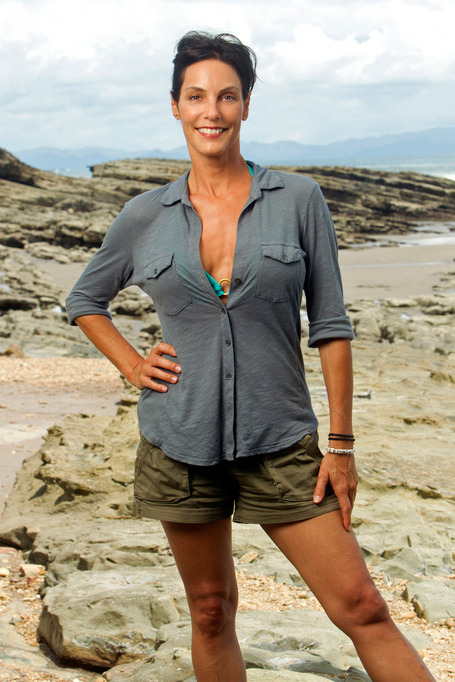 "Peep my sternum" via www.cbs.com

Next time: Phillip crosses into being so unbearable, he becomes indispensable, while Russell's disciplines carry out his plans to prepare for the Second Coming.