Last time on Uncommon Survivor; There is no joy in Mudville, Might Russell has struck out. But you know what? I'm doing okay. I think we're going to be just fine, for we have someone new to "Phil" the role of irritant. The best news is that he's been secured by tribal brass (Rob) as a commodity.

It's St. Patrick's Day, and if you're not eating Corned Beef & Cabbage, you go get some this instant. Don't worry, I didn't brine a brisket for ten days prior, either. That's crazy talk.

You know what else is irritating about Phillip? Okay, maybe not irritating, but just plain unsettling: underwear does not stop him from being a Sleep Creep. He's also running around flashing his chocolate salty balls.

Stephanie and Krista get to go to Redemption Island and Julie proclaims they can't do any damage to us (her alliance). I guess the Merge is coming soon? Rob and Grant show up for the other team.

Redemption Time. Or should I say Matt Island? The challenge is called Building a Replica Rubik's cube out of Cement. Matt wins again and gets a little time to ask some questions of Rob about why he was voted out. Un-comf-ter-bull! How far do you think Christina would make it if she took off running through the trees instead of burning her buff? I don't think she'd get thirty yards, they've got helicopters.

I love that Phillip's isolation has driven him to madness that has him seeing everything in terms of crabs. What a wonderful window into the life of Agent Phil. When someone sees him approaching, they run and hide in holes. Ashley gives us a small peak behind the scenes of courteously pretending to like him.

The shower scene is a missed opportunity for product placement. Herbal Essences, are you seeing this?

Agent Phillip finally finds his opening when Andrea is frustrated as the only girl doing any work. He gives her the serious staring eye to tell her he never back-stabbed her or Matt and proposes being their buddy when/if Matt returns.

Stephanie and Krista are the only good thing going on Zapatera. Well, just Stephanie. The one good one out of the rest of them is Julie the Firefighter. She's always worried about the karma payback, making her like a Pez dispenser of foreshadowing quotes.

Challenge Time! Screaming at blind-folded people! And just like that, Stephanie sucks again. Jeff sums it up when he says being the caller is a Hero or Goat role. I haven't really been buying in to Rob's puzzle solving prowess, but I have to admit that was impressive, even with the dropped tile. That's usually a fatal mistake.

The coffee clue switcheroo: Are you kidding me? Game over.

Dave is kind of a D-bag. If he knew he should have said something before, since he's like Professor Layton or something, isn't the loss kind of on him, too? Instead, he proclaims himself God King of Puzzles henceforth.

Again, Julie is the only one thinking rationally. Everyone else is focused on Stephanie's poor puzzle performance or insisting they can't trust her because she used to be allied with Russell, who isn't coming back. I suppose it wouldn't be as good if they remembered how quickly fortunes can change. The fist bump shared between Rupert and Russell, mortal enemies in their season, stands out in my mind. Krista's defeatist attitude stinks of quitterdom.

Tribal Council Time! Krista torpedoes herself right out of the gate with a classic, "I'm not here to make friends." At least in the fallout of her sinking, she outs all the allied couples. I like the shock on Dave's face when he realizes he has no friends. Steve is such a blowhard. He wasn't about to say anything about his bright idea, but he would have "thrown down" for Dave. They were just blindfolds, Steve, not ball gags. I like the absurdity in Mike's posturing about their secret strategy talks. There's cameras everywhere and their strategy talk, aside from losing on purpose, has been more like a circle jerk.

Voting! Steve gets his two votes from the outcasts and Krista is sent away. 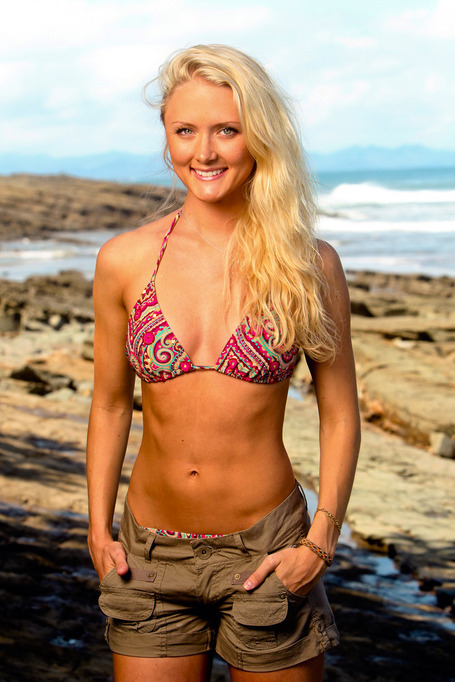 Shares a last name with the family of fat suit Eddie Murphys. via www.cbs.com

Next time: Matt Island might get a new owner (lol wut), and armpit hair plucking leads to a meltdown of the Phillip reactor. I knew I'd be able to work in the word, "meltdown" somehow.