Welcome back to Uncommon Survivor! At this point in the game, Boston Rob is playing above everyone else, and then there's Phillip. I can't be sure if Phillip's loneliness drove him mad before or after he got on the show. The salmon briefs need to be the symbol of his fan club, either worn on the head or outside the pants like Quail-Man.

Matt discovers that Krista is a firecracker because she parrots pet names. I wonder what his scale of explosives goes up to.

Stephanie has the toughest job in the world. Sure, I hear waitressing is hard, but being the one to break the news to Steve to, "hang it up, old timer." What is the job where you're the only one saying what everyone else is thinking?  Tourette syndrome?

The girls on Ometepe are pampering themselves that is rivaled only by the cameraman's zeal for getting close-up armpit plucking shots. Thanks, HDTV. Phillip overvalues himself as a red-headed stepchild. Some people think kids have a future. Old people, on the other hand, they do things like tell you to check on the fire all the time when they're already doing it and mutter things as they shamble away.

Matt is glad Krista is there because he was starting to forget that be believes in God or something. More isolation-driven madness; gets you believing anything, doesn't it?

Redemption Time! It's A-mazin' Marble Madness! Krista chokes under pressure. That was actually pretty close. Krista passed off her Bible to Matt, right in front of Andrea. Thou shalt be jealous! Bible burn!

Sarita jammed a stick into her gums so she could make everyone look at her face and tell her she's pretty. Nobody else is interested in her festering mouth wounds. It's about time David went to Stephanie. Actually it's about two weeks late, give or take a week.

What a great Phillip explosion. Absolutely marvelous. My favorite, although there was so much to love, was the following. What was yours?

Great play by Stephanie on Steve. He didn't know what hit him. He tried acting like he thought she might be lying, but we saw, Steve. We saw you touch her leg.

Challenge Time! Slingshot uh... doubles lacrosse sticks? All hands on deck, Phillip's going to use both of his spirit animals for this challenge. Why he would ever just use one is never explained. Sarita sits out on account of her rotting facehole. Grant is not hiding being a former football player. Ralph is clumsy and you can't understand him. Mike can't hide his lust for short completions and rips Grant's shirt off, but it just makes his muscles all sandy and harder to grab. Zapatera loses again.

Ometepe feasts on delicious-looking seafoods under the second biggest Jesus statue in the world. Of course, Rob spots the clue but he can't grab it without being noticed. Grant grabs it instead and hands it to him and then they try to sneak away... right in front of the second biggest Jesus, you guys. Big mistake. This angers Jesus so much, he sends over his lamb Phillip to disrupt their secret meeting. Busted! Phillip says Hell hath no fury like a lion or a gorilla, but what about a gorillion or a liorilla? I bet Hell has those.

The tale of the two on the bubble. Stephanie is out talking to people, Sarita is not; just poking the side of her face. Don't ask how long it took me to realize it was just a net over Ralph's shoulder and not a blonde Wookiee pelt. I can totally picture Dave running around right now saying he started the whole "winning" thing. Too bad nobody watches Survivor.

Tribal Council Time! Sarita looks like Kristen Wiig. The resemblance is especially striking when she throws herself under the bus. The Stephanie + Dave tag team dominate the council. Sarita walked into a buzz saw. Dave, winning, duh. 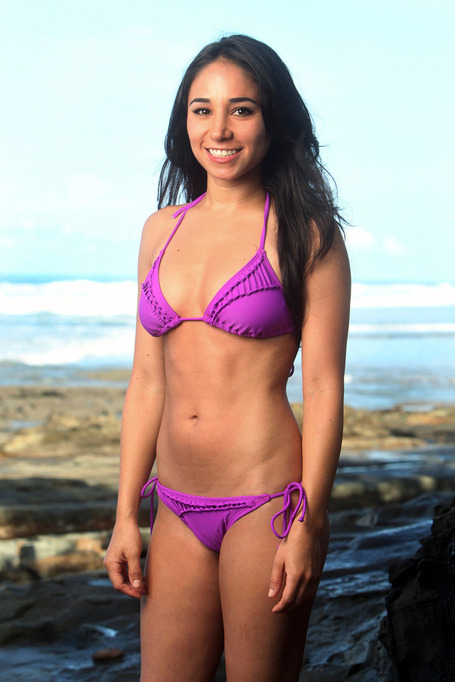 You will be avenged. via www.cbs.com

Next time: Now that Boston Rob is cool, they want to get rid of him. Typical.