Previously on UNCOMMON SURVIVOR; someone's about to get their redemption on. Russell's already swept up his women while Boston Rob is orchestrating blindsides on the fifth night. Matt and Francesca are going to consume valuable air time with their loser's bracket battle.

Matt finds his way to Redemption Island in the dark and wakes up Francesca. She's shocked it's him, but I would've been scared of any noises in the dark, to the point of accidental evacuation, and then we'd have to build a new shelter. Then I'd probably make fun of Matt because he didn't bring his stuff, hoping he'd forget that I'd just pooped all over mine.

Back at Ometepe, Boston Rob does the dumbest thing people in this game have done so far: tell Phillip things. Rob tells him the whole plan in an attempt to corner Andrea, who he double-crossed in blindsiding Matt.

Francesca and Matt retrieve their tree mail that instructs them to meet at an arena. The remaining Survivors draw stones from their tree mail to select who's going to watch the battle. Andrea draws a lucky stone and gets to go watch her island love fight for his life.

Jeff brings on the losers and gives his little intro spiel. Andrea blurts out that she didn't vote for either of them. The challenge is that scene you don't see in movies anymore; where someone's locked up in some dungeon or prison cell and they have to tie a bunch of sticks together to get the keyring. Sort of like the Pirates of the Caribbean ride, but without the dog. We're treated to the most dramatic display of flaccid stick waving prime time television has seen in years. Francesca gets two keys right away while Matt waggles his implement around without effect, but he rallies to win the day anyway when Francesca's stick prowess diminishes.

The girls return to Ometepe and Boston Rob is worried about the reality of Redemption Island. He takes Andrea aside to tell her she's still ahead of Kristina and Phillip. She doesn't trust him and cries because they took her good friend of four days.

The dudes get back to Zapatera and Steve tells Russell that Francesca won the challenge instead of Matt. I guess their plan is Russell will be shocked if they vote him out, but all they're really doing is creating a lie that isn't worth it. Meanwhile, Russell's still hunting with his chickadees for the idol and he's completely stumped by the clue. Ralphie watches them search, patting his hairy belly with delight as they find nothing. Instead, Stephanie decides they don't need a real one, they just need a fake one. Somehow they end up with a bunch of trinkets to fashion an idol from and put it in Stephanie's bag. She exaggerates securing her bag and Steve takes the bait straight down his gullet.

The next day is pretty gross. Russell shaved his armpits before coming out here and the hairs growing back are ingrown so badly they're forming pockets of puss. If you didn't gag seeing that, you won Immunity and are safe from the next vote. The other dudes in Zapatera are all scheming to throw the next challenge so they can get rid of Russell right away, but when Steve brings it up with the others, Julie the Firefighter smartly points out that the other team could go on a run and they won't be able to win again.

Challenge Time! Oh shit yes it's Wheel of Waterboarding, the one that almost killed Brenda last season! Zapatera decides to throw the challenge by missing the bucket with their water spit. Ometepe wins easily and nobody dies, well, except for Dave's performance on the slide puzzle. Russell's pissed and thinks they might have thrown the challenge.

When Ometepe gets back to camp, Boston Rob figures it's time he take this hidden immunity idol business a little more seriously and starts looking for the clue in the reward. The only problem is everyone else is searching, too. Well, except for Phillip, who is crushing a chair so conspicuously, Rob tells him to get up, only to find the clue he's been searching for quite literally right under Phillip's ass. The clue doesn't really help him narrow anything down, though.

Zapatera returns and the six prepare to execute their Order 66; a three-three split vote. Russel, meanwhile, is sure they threw the challenge and begins scheming his counter-attack. Naturally, he supposes they'll do a three-three split and tells Stephanie to go talk to Julie the Firefighter to bring her into the fold. Julie's excited to be joining forces with Russell's experience and buys in to the sales pitch after little persuasion. Stephanie's not that good, Julie had to have wanted to flip beforehand. After getting confirmation from Stephanie, Russell swoops in for the handshake and to give her the order: vote Ralph.

Tribal Council Time! Jeff does the torch speech since it's the first time for Zapatera here. Jeff starts on Ralph, but doesn't get anything intelligible, having to remind him of that all-important mathematic function known as division so that he could describe the status of the tribe. Before long, Russell's saying he isn't mischievous like before, he's here for one thing: #winning. He also lets out that he suspects the challenge was thrown, which prompts fake shocked look from Steve that is just the worst. Mike admits they didn't try, they still wanted to win, but wanted to lose, too. Next, Stephanie hypes Russell to the point Dave has to try to interrupt, but she powers through to come to her point. Okay, maybe she is good? When asked by Jeff, Steve lies and says he did give it his all and he thinks everyone else did, forgetting Mike has already given them up. Stephanie again comes to Russell defense when he's described as a black cloud, which causes a reaction in Ralph big enough to force Jeff to question him again. Ralph mumbles something and Jeff somehow extracts meaning from it. Before the voting begins, Russell ends by saying that nothing is what it seems and does the spooky fingers effect, evoking Julie's gossip face.

Voting time! Are you as shocked as I was to learn Ralph can't spell Russell? I didn't think so. You guys are clever that way. Sarita votes for Stephanie. "Ressell," of course, votes for Ralph. Jeff tallies and reads. Hmm, was asking for hidden immunity idols cut? Anyway, tie vote, revote, blah blah, Julie's dumb. Without enough people in the revote, Russell loses. 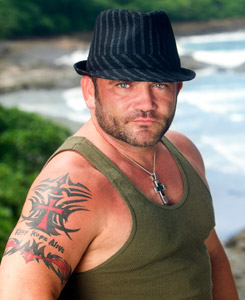 Look at that little puppydog face via cbs.com

Next time: The last thing you'd ever expect; Russell and Matt face off for Redemption and Phillip gets on everyone's nerves.