Previously on UNCOMMON SURVIVOR; Our girl Stephanie was sent away after Boston Rob and Grant tried to lie right in front of the world's second biggest Jesus.

This is my Phillip prediction for this episode: Phillip will join forces with his former nemesis, the crab army, and take over control of the tribe.

If I were Dave, and my plan had just crumbled in front of me, I wouldn't be in the mood to listen to Sarita's platitudes. Steve calls that being antagonistic. I call it wanting her to shut up. She starts in with that, "We can still be buddies" crap, his only other option would be to fake it back to her. Dave's stock is up with me, which means the tribe doesn't like him.

Stephanie's psychological warfare on Matt, listing all the foods she misses, is awesome to behold.

Phillip is Coach 2.0. He's citing classic war texts, with accuracy, and trying to employ their teachings. I bet he could rip Coach in half. Rob having to tag along with him to the challenge is particularly sweet, they're both trying to play the idiot to each other. The question is: who is the bigger idiot?

Redemption Time! It's a memory game! I wonder if Stephanie's perfect recall of all the foods she misses will help her here. Just as I say that, divine intervention gives Matt a blind match. REPENT! REPENT! Stephanie answers back with her own blind match! UNREPENT! UNREPENT! Matt goes on a streak and Stephanie chokes. Matt Island keeps its regime. Phillip promotes him from mere Christian soldier to full-on Samurai warrior.

Not surprisingly, Phillip can't keep to his Miyamoto Musashi plan. Asking Rob what information they should withhold lends Rob just the ammo he needs to artfully play this into more credit with the others. Now I'm upset because he's gone from low-risk commodity to potential Brutus.

I managed to decipher Ralph saying that lawyers think they're better than everyone else, aside from my good friend sdsuaztec4, who's not even a real lawyer yet, that's simply not true. I don't think Ralph even knows what a lawyer does.

I watched all of River Monsters on Netflix, and Dave is right about it being time to fish. It's funny to watch everyone magnify the annoyance they feel for him now that they've decided he's not part of the in-group. In the span of a few hours, he's gone from semi-trusted acquaintance to just the worst. 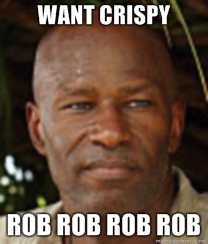 I love you, Phillip. Never change. Get you some crispy. I wonder if the person who had to handle the camera for his long, spirited speech started to cry at any point. Or laugh.

Challenge Time! Do they edit out the snickering when Jeff says, "bags of balls?" I didn't hear any, but there had to be some, right? This challenge was especially designed for jbox's entertainment. Rob's struggling with said bags of balls, going the wrong way with the bag of balls, working quickly with the bag of balls. Admit it, it was excessive for network television. Grant is an animal, one who is good at basketball... like Air Bud.

Can rewards be exchanged? I don't want to go to a volcano. I can't deny it's probably the best place to ditch another expertly extracted clue, though. And this time, second biggest Jesus wasn't even there to see it.

Oh my, look at those vultures... is that turtle going to be okay?

Dave's stock is up in all markets thanks to his strong challenge performance. The reality of Sarita's weakness looms heavy on Zapatera's loser hearts.

Tribal Council Time! Aside from all the other things Dave is better at than Sarita... and Ralph for that matter, another is words. He doesn't ever put his foot in his mouth. Ralph, on the other hand; all I have to say is, can we please not give a million dollars to someone who doesn't know what "cohesive" means? Please? Also someone who can answer an either/or question. Please. Dave did well for himself in his closing statement. The others shouldn't let that guy talk at all, he just makes himself look good, even if he "betrayed" the tribe. 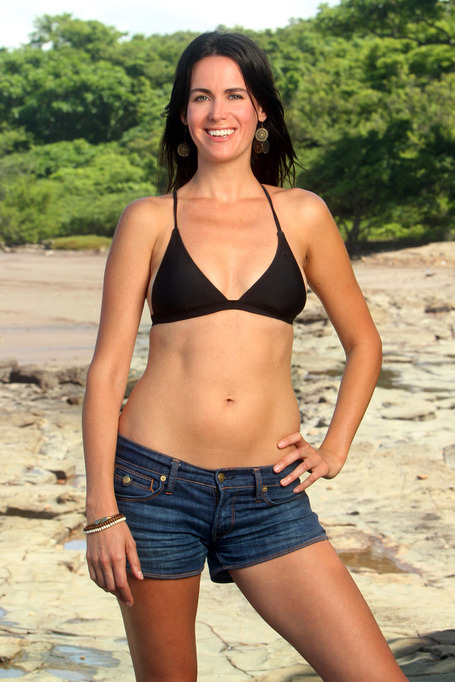 I wish I'd brought my stuff. via www.cbs.com