Last time on UNCOMMON SURVIVOR: It was a lightning round of eliminations that sent Mike and David to Redemption Island. The opening scene is laced with scenes of people calling Phillip crazy. I wonder if that will come up again.

Matt is a broken man, but God wants him to keep playing this game. He and Jesus are literally the biggest reality TV fans.

I've figured it out: Phillip is magic. No, not magic like he believes in; television magic. He's the perfect amount of crazy and annoying to make you scared to approach. We need a whole cast of Phillips. Isolate them, starve them, harvest bountiful crops of magic. We'll live like kings.

Our full minute of Phillip speaking in tongues is such a treat. I didn't even look up what he said about Buddha or whatever. He's probably right, right? Now he's the rice police and he still can't pronounce the name of the tribe correctly, not that I blame him. I don't understand how anyone could think they have a healthy supply of rice out there.

Redemption Threeway Time! That was pretty boring. Jeff made it seem having more people would make it better, but there was no drama in that match. The duels were fine before, I guess. I think Dave will make a good jury member.

I think I bring it up every season, but I want to see the uncensored version of the Phillip & Steve fight. Phillip flows seamlessly from arguing on behalf of logic and reason to dropping the race card and claiming knowledge of martial arts. He put his hands on the piano of schoolyard taunts and did that thing where you slide your hand across all the keys and back. I, for one, have never heard of the stereotype that black people are crazy. Also, you can't play the victim with me, Steve. Sure, you're probably not a racist, but you intentionally antagonized the man you're saying is crazy. Of course he's going to become scary. Which n-word did Phillip use, anyway? Was it the rap music one or the Michael Richards one?

Immunity Challenge Time! Double drunken puzzles! How fast did Rob get that first puzzle done? Is that why he talks like his brain is having a brownout? Weird. I thought that was just called "a Boston accent." Steve should get some kind of lesser prize for coming in first out of the regular people.

Well, well, well. Julie's a THIEF! They must all be secretly addicted to confrontation with Phillip. I know I am, except not secretly. Poor Phillip, too. His swim trunks were his last connection to his former life. He's meshing with nature now; wearing a feather and a loin cloth over his salmon briefs. The swim trunks were it, man. Now there's nothing to go back to. If he survives the next full moon, the transformation will be complete.

Tribal Council Time! Phillip's government training miraculously points to Steve? It has to be because Steve's guilty of something else. Never doubt the training! Jeff's dissection of the earlier event sheds some light on how Phillip arrived at the conclusion that crazy equals racial slur, but his logic is all over the place. Phillip is incapable of discerning whether or not people are treating him a certain way for racial reasons or for the reason that he's a weird dude. Julie admitted to stealing the shorts? Does she tell Phillip where she buried them now? She probably wants him to bother her a lot; schoolgirl crush!

Voting time! Does Ralph know the alphabet? Pretty sure one of the characters he wrote was Russian. Three votes Phillip, the rest for Julie. Her schoolgirl crush is ruined! 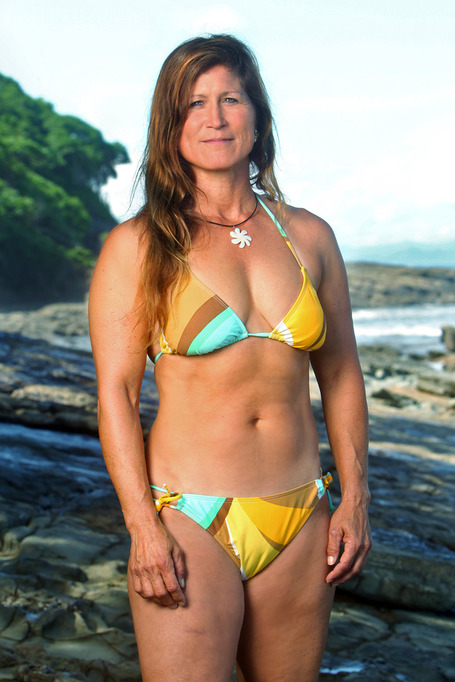 This was once a schoolgirl via www.cbs.com

Next time: Caught on tape! God is literally carrying Matt! Game over, atheists! Repent now! (or some time before next week.)