Wonko asked me yesterday before this aired how many people would be eliminated tonight. I did some quick math, figuring that the finale is Sunday and there's only the five left, but I completely forgot that there's people hiding on Redemption Island. Is that good or bad?

Natalie would make a perfect lap dog. Come to think of it, Rob has everyone under his spell; is he hiding Snausages?

Andrea and Matt fight like a great couple. Close your eyes and you can see them standing in front of a Red Box. I can't decide if I like Ralph's decision to make Andrea sleep on the ground. I like the result, but not the reason. Torture the pawn if you must, but be aware that the king is not feeling the pain.

Redemption Island Challenge Time! If I were Andrea, I would have put some kind of sticks or leaves on my face so as to not be the only one without facial hair. Ralph looks like he's got a lot of experience with that handle maze. His wrist movements are so fast. I know what you're thinking: the guy loves playing flight simulators. Speaking of joysticks, Andrea's commentary while she guided the handle almost entirely innuendo. Bravo. Is it fair that they made the puzzle a word and Ralph is functionally illiterate?

I couldn't agree with Rob more, I want Redemption Island to be over and done with so it's not a factor anymore. I disagree about the part about the heart, though, Grant probably has the biggest one.

Another week (three days Survivor time), another Golden Phillip Conflict: this time over average calorie requirements for men versus women. My favorite part was Phillip saying he's a well-read person while trying to censor his own curse words and going nuts. If you're telling someone to go away from you, and they tell you, "no" and come toward you, you're allowed to kick them, right? Survivor Judges, please?

Ashley's plan to get rid of Grant before getting rid of Phillip... or herself... makes more sense to me, but the fact that she thought of that plan makes her too smart to keep around. CONUNDRUMS! Of course Rob takes this news and feeds to Grant so they can call each other "bro" a lot and slap hands together.

Bro fists with Phillip leads the way to ... Tree mail! Ashley is getting all twitchy and it's making Natalie nervous, which makes Rob nervous, because he's got this slightly creepy affection for Natalie. When Ashley says she's gonna win right before they leave for the challenge, I swear I saw Rob almost spit out his food.

Immunity Challenge Time! It's the one-handed fish bone aka The Busy Deckhand. And the winner is... Ashley. I almost forgot how much fun it is when Rob's plans explode in his face.

Rob apologizes to Grant ahead of time, that's something you don't see enough of; probably because everyone else changes their mind or is blindsided in the hours before a vote. Whoever put the blues harmonica track behind it deserves an award, too.

Rob complaining about having to do all the dirty work to get everyone's story straight is a Grade A humblebrag. "Oh, all these puppets, they just do what I want." You know, that's how Pinnochio started.

Tribal Council Time! Looks like Ralph's version of cleaned up means changing a shirt. I think I'm spoiled because I think Jeff should be asking Phillip what his Native American grandfather told him to start out every tribal. Did you see Natalie's heart break a little when Rob said his wife and kid are what helps him get through? And then Grant trying to tear up for the jury; shame on you, man, no award. You've got nothing on blues harmonica soundtrack guy. How big is this vote, Jeff? It's the biggest vote there ever was, okay? Next question.

Voting Time! I have a sudden urge to see blooper reel footage where someone has to ask for a new marker. Blindside, right, Grant? Blindside! 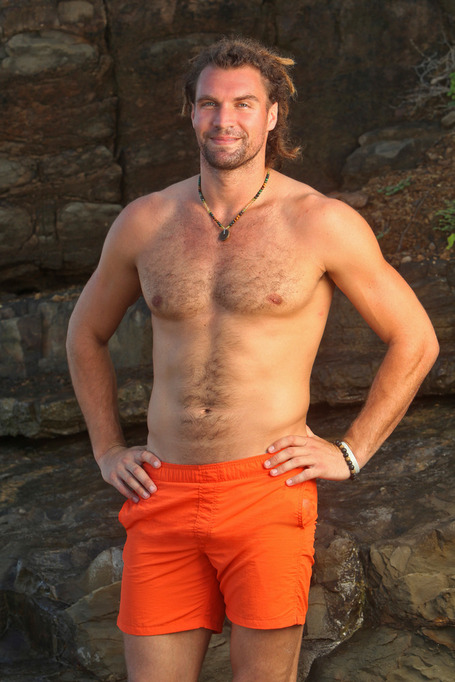 "I waxed this morning." via www.cbs.com

Next time: FINALE GET!