Ladies and gentlemen, it is that time again! Yes, for someteen weeks, you and I are going to embark on a journey of heroes, villains, dragonslayers, f$%#kin' rainbows, starvation, and pristine, naturally shiny skin. Look at that, I got a new logo and everything. Twenty-three seasons, you guys; can you believe it? There are children on Xbox LIVE hurling homophobic slurs right now that have grown up in a fully Survivor-saturated world. Jeff Probst is like their Captain Kangaroo. Amazing, right?

Is your hype factory operating at full capacity? Alright, let's do this.

Coach and Ozzy are back. Coach is probably Uncommon's Favorite Survivor. The guy just oozes awesome in that special way that is too "network television" for hipsters and too manly for teen girls. Ozzy; honestly, forgot all about you, buddy. I mean, I know what you look like, so if you come find me to beat me over something I'm sure to write, I could point you out to the cops. Just sayin'.

The rest of the introductions:

Oh, now they do names.
You don't have to put it on PostSecret, you can admit it to me: Jeff and his pocket shirt look good.
"I hope it's not Russell Hantz!" - It could only be more awkward if Russell himself were already standing there.

Coach and Ozzy exit their helicopters and everyone feels like they got the B-team. John "Cochran" gets to choose his own name; should have gone with Laser. Ozzy smashes his paint egg on his chest but it's not sexy; it's paintball suicide. Cowboy already doesn't like Coach because Calisi says brave men slayed the last of the dragons long ago. It is known. It is known.

Instead of rice, the winners get taro, which is toxic if consumed raw. Awesome.

Coach and Ozzy are forced to dance like monkeys for everyone in order to gain acceptance in the tribes. I like the part where they all yell different words at the same time. My second favorite was when Ozzy pulled himself under the log and the red paint on his chest looked like blood.

Semhar, the spoken word artist: I hope she does all her tribal speeches in pseudo-rhyme. Ozzy wants her... alongside him... for the game, perv!

Cochran the Nerd doesn't want to go into the water, which makes everyone stare at him when he finally does. Good plan.

The first wisdom of Coach: You can't run from fear.

There is already another coach on the tribe, but this one does baseball; the civilized man's sport. There's also a Russian economics major. This is what I know about Russian economics: Obama takes all your money. Coach even speaks the language of the Reds, we got to keep an eye on him.

You know who else is awesome? Jim the Medical Marijuana Dispenser/Poker Tournament Winner. What an outlaw. Guys like him need only stand near bat-wing doors and barkeeps will soil themselves with fright.

Did you know it wouldn't be Survivor if there wasn't a bear? If you are not down with bears, now is the time to get in, stocks are going up.

Dawn has six kids and without them, is losing grip of her sanity. And Ozzy as Bob Marley? Kind of racist, lady.

I like how Hitler's Nephew doesn't have a job, he's just "nephew of guy you know." If you thought being related to Russell was enough to give you some issues in your life, he's also deeply uncomfortable around attractive women thanks to his religious conviction. It's kind of cute in a "yep, this guy is going to cereal murder Mikayla" kind of way. Fruit. Loops.

It's time for the Bi-annual Make-a-Pact-with-Strangers Conference. This is what you do; get five strangers with decent to satisfactory facial symmetry and tell them you're going to be their best friend for a month until you stab them in the back. It's always a blast when I do it using Craigslist.

Dawn's breakdown: confirmed. If you had "suburban housewife losing her sh*t in the wilderness on Day 2," go ahead and mark your bingo card. Then the first one she runs to is Ozzy Marley.

Cochran fails to maim himself with a machete. I have suspicions that "nerd severs finger" bingo square is getting filled soon.

Hitler's Nephew catches a fish so small, it can't be seen from a few yards away. When asked how big it is, he answers by indicating the length with his fingers; something that probably can't be seen from the shore either. High-five!

Challenge Time! Obstacle Course Basketball. I guess these obstacle-course-plus-basketball challenges should have numbers. This has got to be the third variant, at least. Did you notice Semhar was slinging more than just red coconuts? Wowza. Jim the Drug Dealer feels bad when he runs out of milk, he feels like crap when he loses. We are kindred spirits, you guys.

Stacey the Mortician should just pack up her bindle and go home. She touched the clue in the most obvious tree-hole nature ever created. They can't leave her alone out there. It's cruel.

Semhar feels worse than anyone and only she is allowed to do that, so don't even try. She's also winning the first prize honesty ribbon. This ribbon is awarded to the first Survivor contestant each season who confuses being an ass with being an honest person.

Ozzy isn't much of a standup guy, picking on the nerd and keeping the pretty girl. Jim doesn't care how hot Semhar looks when her hair gets a little frazzled, or when she gets coconut husk stuck to her butt in that adorable way. Cochran, on the other hand, thinks his Achilles' Heel is his insecurity, when it's actually his whole body, so he's in a lot of trouble. Cochran has this self-deprecating humor that I'm not very interested in. I'm interested when he casually mentions getting voting off before girls or the bear would be embarrassing. I mean, to be voted out first on Survivor is one thing, but to be beaten by the No-Dicks and a Dick-Dicker? Unfathomable (for Cochran)!

Tribal Council Time! Fire, life, redemption island, yadda-yadda. Semhar doesn't do anything in rhyme or even pseudo-rhyme. The editing was particularly good in this segment because everything that's said has Semhar's reaction faces. I don't want to jump the gun on this, but this is how memes start. Just sayin'. Cochran's trivialization of Semhar's contributions was great. There are not many things quite like pointing out that someone's self-lauding is undeserved.

Cochran gets one vote and Semhar gets the rest. 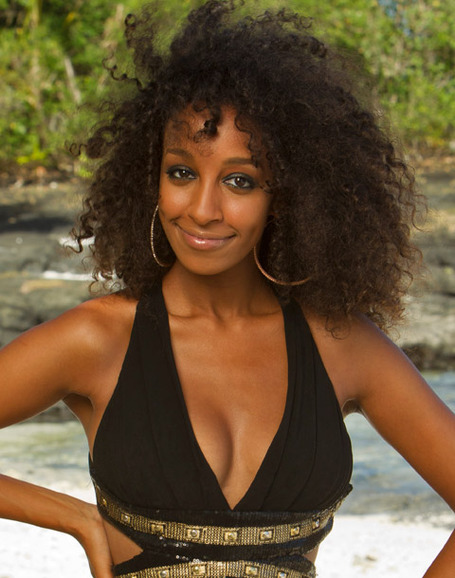 "Is there coconut husk on my butt again??"  via www.cbs.com

Next time: Hitler's Nephew shows the Dragon Slayer his birthmark, setting the events of the prophecy in motion.