Uncommon Survivor 23 - Week 3: One Reapeth What One Soweth

Share All sharing options for: Uncommon Survivor 23 - Week 3: One Reapeth What One Soweth

Previously on UNCOMMON SURVIVOR: Brandon's lies have created a fire hazard situation out of his pants. Now everybody has to be real careful around the fire.

This is what I predict will happen this episode: Mikayla goes off alone to gather wood or something, Brandon follows after. When he comes back, he explains that all he heard was screaming, and there was so much blood. SO MUCH BLOOD! Mikayla's entrails were strewn about hither and thither like she was eviscerated by jackals. Then he realized the screaming was him the whole time.

Christine owns that she got owned rather than anger-rhyming about an ex-husband. Weird, right?

Brandon didn't want to lie and he feels really bad about it. He wanted to be a hero, he wanted to play the opposite way of his uncle. He sounds like the Green Goblin. Poor Mikayla is racking her brain trying to figure out what she did, not realizing that Brandon hates her and is in love with her all because of the way she looks. It's almost racist.

Redemption Challenge Time! I like to call this challenge Toteming your Pole because it sounds suggestive. Before we start, though, Semhar has to recite a graphic poem about all the different kinds of relations she's going to have with Mr. Right. Then I can't get those relations out of my head for the rest of the challenge as Jeff gives the women instructions on how to deliver ten babies at the same time; just in case that happens. Semhar loses in like a minute. Then she cries about being abandoned her whole life and when Jeff points out that she sought this game out, she says she's proud that she never gives up and she doesn't want to press charges, officer, because Survivor will change because she loves him/it. Christine lives on and Coach hates it.

God is so mad at Brandon that He's doing that passive-aggressive thing where everything appears to be exactly the same, but isn't. God a mean prankster, too. He'll put invisible pubes on your toothbrush-twig before you even know which twig you're going to use. Brandon finally admits to the tribe who he is, punctuated by Stacey's "blamo" or whatever. She thinks she's Michael Winslow. Coach stresses that he still trusts Brandon absolutely, but not with both feet. He's doing The Crane. A Confidence Crane, if you will.

I'm kind of uncomfortable with seeing the name Papa Bear on the screen. It's like a bad joke; believe me, I know a bad joke! Ozzy's stories about how he shot a fish with a spear must be the coolest stories, bro. I bet they ask him to tell another.

Keith and Whitney are an item! I like the way everyone in their tribe is anticipating the stab in the back. People go feral faster that way.

Mikayla and Brandon are gonna go talk! This is it! The murder! Okay... he's not stabbing her yet, but he's getting angry. Now he's getting witnesses! This can't be good!

When will people learn how to pray right? Brandon could easily stop from ever sinning if he would just learn to pray correctly. Coach is very concerned about Bran's explosion. It's time to trust him with fewer feet now, buddy!

Immunity Challenge Time! I have no idea what this challenge is about but it looks like someone could easily lose a finger in there. There's also grappling hooks and, of course, a puzzle. Blue team wins and I'm certain it's because Brandon pointed to the sky during the challenge. God loves a shout-out. They take home milk, cookies, and some other stuff. If, as soon as they arrive back at camp, someone grabs the milk and just starts gulping it down without sharing, they would be my best friend forever.

Ozzy spreads the word that it's time to grant my wish and take Papa Bear's name off the screen. But Papa Bear, he's smarter than the average bear, apparently, cuz he takes the news that he's safe as "you're as good as dead" and starts a frantic search for an immunity idol. Failing to do so after digging around in the sand for five minutes, he constructs a fake idol and "waltzes" back into camp. This doesn't do much to the people in control of the tribe, but it does screw Cochran over pretty well. Now he's gone from not being eliminated to maybe being eliminated. Ranger Smith isn't gonna like this, Yogi.

Tribal Council Time! I have to give Papa Bear credit. The things he said weren't the usual fecal-stirring speech, it was a speech that someone on the jury would give; someone who knew the ins and outs. It's a shame that his body is no longer ready, because his mind is sharp as a tack. 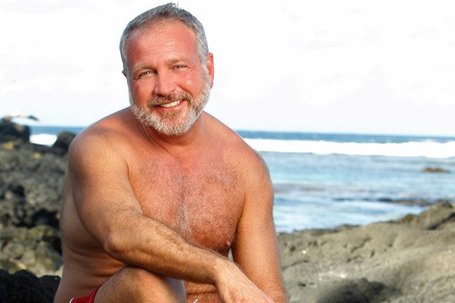 "Beary glad to meet you." via www.cbs.com