Share All sharing options for: Uncommon Survivor: One World - Week 1

Here we fornicating go again. So, everybody livin' on one beach. This could be good, but I bet they're gonna play it all Carebear style. Hugging, saying please and thank you... fecal matter like that. If we're lucky there'll be some awesome ownings like "Yeah, did you see your face during the challenge when you lost? It was like this:"

And they will look over and they will be wearing the very same face and they will feel bad thinking about their fresh defeat and we will laugh and enjoy it. Maybe we'll discuss it here. I don't know, maybe. I don't wanna push it.

Girl with the hat, you don't fit in because you wear random hats. Sassy gay guy, deliver me a line. Mustache guy's name is Tarzan, I guess that's okay, but Troyzan is pretty effin' pissed. Sassy gay guy calls himself the girl, but he didn't even notice the tiny man among them. Not that the tiny man is a girl, but I bet you could throw him, which is a terrible way to gauge trust. Man Tribe will have no problems; oppression of the womenfolk will carry on as normal.

Everyone has to strip the truck for supplies and the thieving begins. Leave it to the banker to steal someone else's goods. Jeff hands off the maps and sends the teams in opposite directions. I'm ignoring the stupid man joke about map-reading because I think it's a bit early to declare someone the unfunny loser this far in. Turns out the tiny man is actually really strong, too.

The women waste no time deciding who the outsiders are. Wouldn't you know it? Whale hat girl is out.

Both teams arrive to find they're sharing a camp. Get ready for some good ol' fashioned college movie antics!

Oh look! Chickens! Now everyone is working together. Leave it to chickens to create a ceasefire in the war of the sexes... The country girl nabs two chickens and all previous agreements for distribution are off. Bam, ish just got real.

Fort building is happening! Colton, the network TV gay, isn't doing anything. During that time, he runs off to ally up with the ladies. Matt the Attorney, leader of the Ab Brigade, has finely tuned GAYDAR and sees all, but Colton wants him out cuz he's too manly.

The dudebros set out to build a fire and achieve flames in very little TV time. That's all it takes to pique the interest of the ladies. Negotiations start, then all out horseplay around the fire; very dangerous. After that, the women resort to selling their bodies. Dude was right, things are going to go just fine for the men.

Night falls and the ladies strip down to their undies in an attempt to gain fire. Michael "The One Percent" Banker isn't relenting. After they fall asleep, though, wimmins sneak over to steal the gift of Prometheus.

The next shot is a bunch of fog... or smoke, because the women have burned down the whole island. Just kidding, there's a live bat. The women share breakfast in the form of a pineapple and reveal that their stolen flame died out. Alicia doesn't like that Christina is making deals, she has control problems. And too much booty in the pants.

Idol found on the first day? Fire somebody! At least the rules forbid Sabrina from keeping it. Colton is the obvious choice, but does it look like he's going to be able to keep a secret?

Immunity Challenge Time! Whoever said "woo" - shut up. Everyone else can "woo" but you. The challenge is going along fine until Kourtney's wrist flop. Jeff stops the challenge for the medic and America groans. Kourtney is out for X-rays, maybe with a broken ulna or radius. Jeff calls it over and declares the men the winner with the option to decide to accept immunity or play on. The women immediately mock their masculinity, but they're too buff and strong to let mind games affect them.

Women return home with frowny faces. Nina, a retired LAPD officer points to her face and exclaims that she doesn't know how this happened (lol). Kim grew up watching Westerns and she can't believe the men didn't kill a zillion Indians and save the damsel in distress.

Sabrina hands off the Man Idol to Colton and he makes a joke about Taylor Swift that nobody in ABC's target demo will get. They're probably already steamed that you're gay, now you're making jokes they don't understand?

Tribal Council Time! Damn. The girls just can't tell the truth, except when it's calling their frenemy out. After all the talking over each other stops, Jeff tries to unravel it and it just leads to more yelling. They quiet down when they admit that they have no idea what they're doing. Kourtney's wrist is broken in several places so she's out. Too bad. Jeff sends them home with fire and some words of wisdom. Good ol' Jeff. 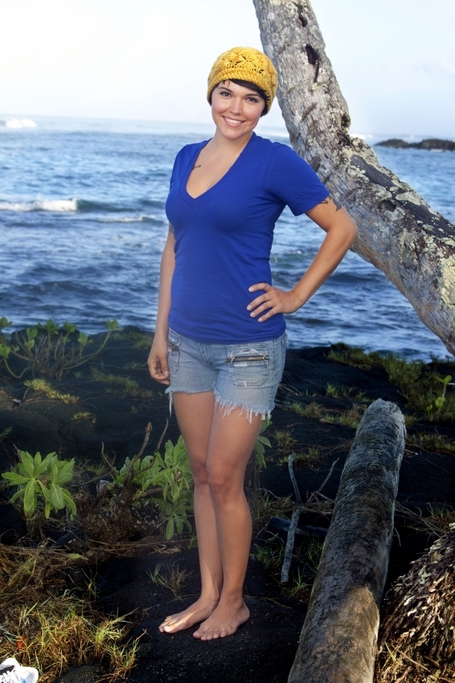 "I guess you can say I'll never be the head of a major corporation!"

Next time! The women accelerate into their downward spiral and Colton becomes a transmittable disease.