Share All sharing options for: Uncommon Survivor: One World - Week 2

Last time we got to know everyone... mostly everyone, anyway. Our early storyline people are in place. There are still some hidden people out there, one of whom will show up just after the Merge like they've always been there. On the Internet, we call them lurkers, and that's what we're going to call them in Survivor now, too. (cut to seven weeks from now: I forget ever writing that)

Let's see, what's in the news? Oh, jbox would have "liked" this one. RIP jbox's Uncommon activity.

The women return from the vote and are greeted by one of the men (Michael? I don't know) who tells them he kept their fire alive while they were gone. Kat, unfamiliar with the concept of thanks, explains that she's the fire person, so no thanks. A bee charges at her for her insolence.

Alicia is no stranger to two-faced diplomacy. I bet her circle of IRL friends are super fun to be around. The ladies have a meeting to see who should be the new leader. The ol' foisting of leadership upon someone else gag! In this prank, contestants determine that the person who is talking the most just needs to shut up in general, so they're elected to the position of Scape Goat King (Queen in this case, this is a standard monarchy format). In this case, it's Sabrina. Workloads are divided up. An older lady volunteers to do water. Kat and Alicia choose gathering food. Ha, they're going to die. Could be the first season we see some cannibalism, you guys.

Tree Mail! Wouldn't you know it, Alicia just said she hates knots and the challenge is knots. This is a Jeffless challenge so I couldn't really understand the rules or what was happening. You take Jeff out and I'm lost. The men cheered a lot at the end so I guess they won. Sabrina says they needed the tarp like a fat kid needs cake, which is just a gem. Thanks, Sabrina.

Heh, what do ya know? "This is bat country" (movie reference). The men are getting ish done and Colton is walking around waving his hand in the air like the men smell bad. Rude. Then he goes over and does work for the other team! Even worse, he's bad at it and unwanted by the women, too. He begs to stay and becomes a creepy stalker. This is the best part of One World so far, worrying about your tribe's stalker.

Night time and the men are gyrating hips around a fire. The shadows of the fire make butt cracks appear larger, so even though it's dead of night in the wilderness, Tarzan's butt has to be blurred. Once Colton's sufficiently kicked out of the women's camp, he becomes king of his own little clique by flashing his idol to Troyzan.

Immunity Challenge Time! Yes! Jeff's back. He's wearing a green shirt. Remember when I had that thing going? Glory days. Skinny Bridge Shuffle: Hugs Edition! The dudes start out with Lil Leif going first and, after a hiccup, take off to victory while the women take several attempts to figure out how to play the game. In the end, one of them blamed their boobs being hard. Total number of times Kat jumped into the water without reason: two. It made Monica sad for women.

The old hens lay their strategy for getting rid of Kat instead of either of them. Nina marks a hard play to Chelsea to get rid of her. My gut says Nina was probably not a dirty cop in her day; and you can take that to the Mount of Gox.

Tribal Council Time! Jeff is pretty astounded at how bad it's going for the women. Nina puts Kat's life experience on trial. Turns out she's never done anything she couldn't already do. She jabs at Christina for some reason which leads to a classic standup bit where Sabrina talks about men doing this and women doing that. There are no genders here, this is One World.

Bonus Fun: Kat says she'd never throw Nina under the bus like Nina did her... while writing her name down, after she just did it to Christina. 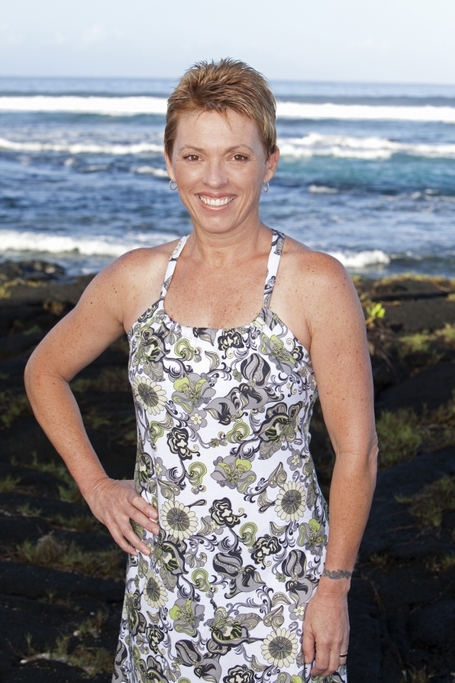 Former Officer Eliminated By Conspiracy of Dumb via www.cbs.com

Next Time: The women are dying and Colton's a Republican. TV, you are so cool.