Share All sharing options for: Uncommon Survivor: One World - Week 5

Previously on ... UNCOMMON SURVIVOR: The men outdumbed the women and chose to go to a tribal council that wasn't theirs, executed Bill the Jester, and swore their eternal allegiance to King Colton the classist.

The women rejoice in the men's dumbness, as they should. I even wish they were a little harsher.

Reward Challenge like three minutes in? Okay... Wait a minute, tribe switch! Cool buff striptease, too. To decide the new tribes, they shall challenge Smashmouth to an egg eating contest. No wait, that's smashing colored eggs of paint. Same thing?

Now back to the challenge: do a challengy thing best and win coffee, sandwich ingredients, the deed to the property of the original camp. Instead of listening to the challenge, I just listened to this fine ditty. Then I had to urinate. When Salani won, they chanted "Peanut Butter Jelly." It was bad of them to do that. Colton remarks that he's now on the tribe of peasants against the Greek Gods. Mister Popular already.

WHALES. I think Sabrina has amnesia or something because she was excited that Kat was on her team. Colton is super bummed about his new tribe. Those Greek Gods are over there eating peanut butter & jelly sandwiches, getting stronger and stronger, just waiting to do stuff to the mortal peasants. Alicia is also unstoked about the new tribe. Leif and Tarzan practice their new comedy slapstick comedy routine while trying to build a new home. Colton's new tentacles immediately being forging a new alliance.

Over at Salani, Mike and Chelsea get crabs, on their way back, they're told to wait; the other have cornered some chickens. Troyzan pulls a classic Al Bundy move referring back to his high school football days when he snags a fleeing fowl. He even adds a little Madden "boom" at the end. Good guy, that Troyzan. Kim forges a new bond with Troyzan and Jay. Everything's coming up Milhouse for Salani.

Colton and Alicia are making necklaces and planning their next move while the others are trying to build them a shelter. Jonas notices this and takes him aside for an explanation. He respects Colton's game plan of not doing anything physical. The scene ends with four seconds of Alicia's butt. Not sure why.

Kim spends the next morning looking for the remaining hidden immunity idol at her camp. She runs off to tell Chelsea that it's hidden in her crotch. This is moving to PG13 really fast.

Back at Manono, a chicken has wandered into a cartoon trap. The trap is successfully deployed and the chicken is caught and there is much rejoicing. Then the chicken walks away casually. There was a chicken-sized hole in the trap. Classic Manono. Colton is pushing hard on Alicia to get rid of Monica because she's got friends or is strong or something. She could do the tribe's laundry on her abs, so I guess it's the strength.

Immunity Challenge Time! Knee-high water basketball! Salani shoves Manono to the side and scores first. It looks like the same thing is going to happen in round two, but Leif puts up a little fight (haha) and delays the eventual ragdolling Manono has coming. The third round gets cool when Kat and Christina just fight while everyone else plays the game. The fourth round featured a near drowning of Colton while he squealed and Tarzan getting thrown down while Salani easily claims the victory. I think Manono only got two shots on goal, and that's being generous. These are the best challenges; ball sports!

Tribal Council Time! The beginning of the council is all of Monica's enemies talking about how great she is. Tarzan says a lot of words without saying much at all. At least he tells America what a neologism is. Despite being a big word nerd, he also has nominal aphasia, so that's why he doesn't know what half the tribes' names are.

Voting Time! Colton tries to ask Tarzan if he remembers what to do, which is returned with a confused stare from Tarzan.

Tarzan, Tarzan (and a banana), Monica, Monica (crying face art), Monica, Monica. Well, it was a blindside, except the person who seems most blindsided by it all was someone who wasn't voted out. 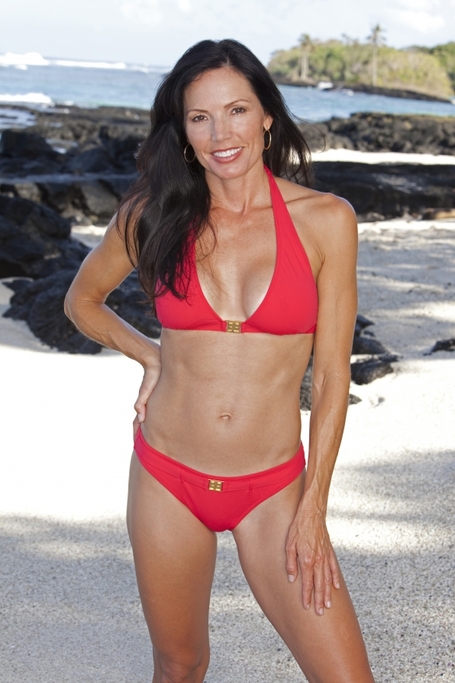 Next time: Colton tells Christina to jump into the fire and then the medics show up, so maybe she did it. Thanks for reading.